A recent report in these columns on a wounded tiger enraged them to such an extent that one of them called the reporter a “rascal” on his official Twitter handle. (DC Cartoon/Subhani)

Our bureaucrats seem to get a tad touchy when someone points out their negligence. A recent report in these columns on a wounded tiger enraged them to such an extent that one of them called the reporter a “rascal” on his official Twitter handle. The report was about the efforts of forest officials in Andhra Pradesh and Telangana state in catching and providing treatment to an injured tiger. The tiger which belongs to the Nagarjunasagar tiger reserve (NSTR) in Andhra Pradesh was spotted in the Amrabad tiger reserve (ATR) in Telangana state. The tiger was in discomfort, with a clear wound under one of its eyes. So, officials from NSTR and ATR joined forces to catch it if needed, treat the wound, and save the tiger. But the report in this newspaper about the tiger being injured in NSTR and moving into ATR was enough to ruffle the feathers of some babus. NSTR officials seemed to be upset over the report saying the tiger was injured in AP. ‘@nstr-tiger’ took to Twitter to say there was no scientific evidence that the tiger was injured in AP. In another tweet, ‘@nstr-tiger’ said the reason for the injury was yet to be found. “A ‘rascal’ wrote that it was injured in AP,” an NSTR official said, venting his ire!

A mega agglomeration of companies is on an aggressive mode of acquisitions. The recent addition to its basket is a group of educational institutions set up by non-resident Indians. It owns an engineering and two medical colleges besides intermediate colleges. The company is also close to completing the acquisition of a corporate hospital in Hyderabad’s financial hub. The mega company had its humble beginnings in the irrigation sector and made enormous strides within a short span of time. The company no doubt owes a lot to late chief minister Y.S. Rajasekhar Reddy for the first break. The company earned the reputation of honouring its commitments, and that helped it grow across India and win friends cutting across party lines. The vision of the man behind the company’s success is that irrigation works have been reaching the saturation point and diversification is the only answer. The company made forays into oil and gas, battery-run vehicles, realty and has now entered the education sector. Joyous over a friend’s success, the flamboyant son of a veteran Rayalaseema Congress leader currently sailing with the Telugu Desam threw a grand party recently to celebrate the takeovers!

Finally, R. Muthyala Raju, who entered the AP Chief Minister’s Office more than two months ago, has got something to do, with his immediate boss Praveen Prakash allocating him some subjects. Raju, who has earned for himself the tag of a hardworking and sincere officer, had to wait for a longer period than most. He has now got housing and CM Relief Fund besides the Herculean task of addressing the problems of elected representatives. Ideally the subject of resolving issues raised by MPs and MLAs should be handled by senior officials as they involve inter-departmental consultations which need lots of pushing and pulling of strings. Apparently, all senior officers in the CMO avoided the task, which the babus consider a headache. Maybe they could have learnt a lesson from former chief secretary S.V. Prasad’s unparalleled handling of the CMO during the Naidu regime. With an everlasting smile, Prasad used to receive MPs and MLAs, lend a patient hearing and try to resolve their issues. However, his successors with some exceptions like Ajay Kallam have avoided meeting people’s representatives, leave alone addressing their problems. 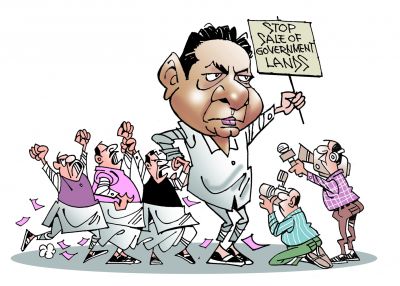 Political parties and leaders adopt divergent stands on specific issues while in power and when they are in the Opposition. An old picture of IT minister K.T. Rama Rao has gone viral on social media platforms of late, its newsworthiness being the row over auctioning government lands to raise funds for welfare schemes and development programmes. In this picture, KTR is seen sitting on a dharna on a road holding placards against the then Congress government’s decision to sell land parcels in Hyderabad to raise funds.  The placards read, ‘Stop sale of government lands’ and ‘State government must stop indulging in real estate business’. Now, the TRS is in power Telangana and the government has put up public lands for sale. In a strange twist, Rama Rao and finance minister T. Harish Rao, who had strongly opposed the land sale by the previous Congress government, are now the members of the Cabinet sub-committee on resource mobilisation which has recommended that the government sell its land assets to raise revenues. In fact, Harish Rao is heading this committee; he was once arrested when he tried to block the sale of government lands by the then Congress government.

Dilip Kumar, legend and Nehru’s hero, is no more

Dilip Kumar, legend and Nehru’s hero, is no more