Britain accused of security lapse in case of jihadi who fled

Dhar, a Hindu who converted to Islam, taunted British authorities after his arrival in Syria, posting a photo of himself on social media with his baby son in one arm and an AK-47 assault rifle in the other. (Photo: Twitter)

London: Opposition members of Parliament criticized the British government on Tuesday for failing to prevent a man charged with serious crimes from travelling to Syria to join Islamic State extremists.

The accusations came after British news media reports that a man who appeared in an ISIS video posted Sunday in which five purported spies were shot dead might be Siddhartha Dhar, also known by his Muslim name Abu Rumaysah.

While nobody has provided a firm link between Dhar and the video, the Labour Party spokesman on terrorism said either way the government failed to properly monitor Dhar after he was freed on bail in 2014. Andy Burnham told Parliament that a letter asking Dhar to surrender his passport was sent after he had already left for Syria.

"The system failed because it allowed him to go to Syria, even though he was well known to authorities and had been arrested six times on terror-related offenses," Burnham said.

Dhar, a Hindu who converted to Islam, taunted British authorities after his arrival in Syria, posting a photo of himself on social media with his baby son in one arm and an AK-47 assault rifle in the other. "What a shoddy security system Britain must have to allow me to breeze through Europe," he tweeted.

Although the possible link to the video has brought renewed scrutiny on Dhar, his sister said she isn't sure he's the man in the video and some who knew him in Britain say they can't be positive it's him.

The masked figure in the video appears to have stepped into the role formerly played by British citizen Mohammed Emwazi, who was killed by a drone strike in November after taking part in a series of beheading videos that earned him the nickname "Jihadi John."

Meanwhile, London's mayor said a small child shown threatening non-Muslims in the same video should be taken from his parents if the family ever returns to Britain. 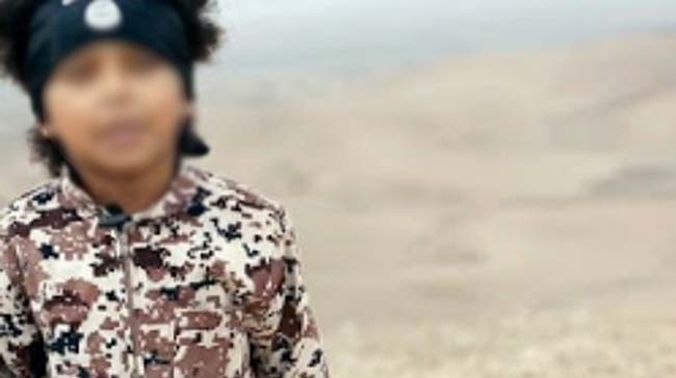 For children in a war zone, ISIS has an allure. (Photo: Twitter)

The boy, thought to be 4 or 5, was identified by a man who told Britain's Channel 4 News that he is his grandfather. The man, whose daughter was born to a Christian family and converted to Islam before moving to Syria with her family, said the boy doesn't know what he is doing and is being used for propaganda purposes.

The Associated Press isn't naming the grandfather to avoid identifying the child, who is seen on the video wearing camouflage and saying: "Go kill the kuffar (non-believer) over there!"

London Mayor Boris Johnson said that the boy should be taken from his parents and placed in foster care if the family ever returns to Britain.

"This child is a victim of child abuse and he is, as I understand it, a British national," Johnson said. "I think we have a duty of care."