Video: Chris Gayle ‘sorry’ after being slammed for live TV chat up line with female presenter

Ten Network reporter Mel McLaughlin found herself being asked out for a drink during an interview with Chris Gayle after he blasted 41 runs off 15 balls for the Melbourne Renegades in the Big Bash League (BBL). (Photo: Screengrab)

Sydney: West Indies star Chris Gayle apologised Tuesday after his "joke" flirt with a female television presenter was branded "disrespectful" and "inappropriate" by authorities who left a threat of sanctions dangling.

Ten Network reporter Mel McLaughlin found herself being asked out for a drink during an interview with the burly opener after he blasted 41 runs off 15 balls for the Melbourne Renegades in the Big Bash League (BBL) late Monday.

On air, Gayle said he was happy to be interviewed by McLaughlin "just to see your eyes for the first time".

"Nice, so hopefully we can win this game and we can have a drink after," he said. 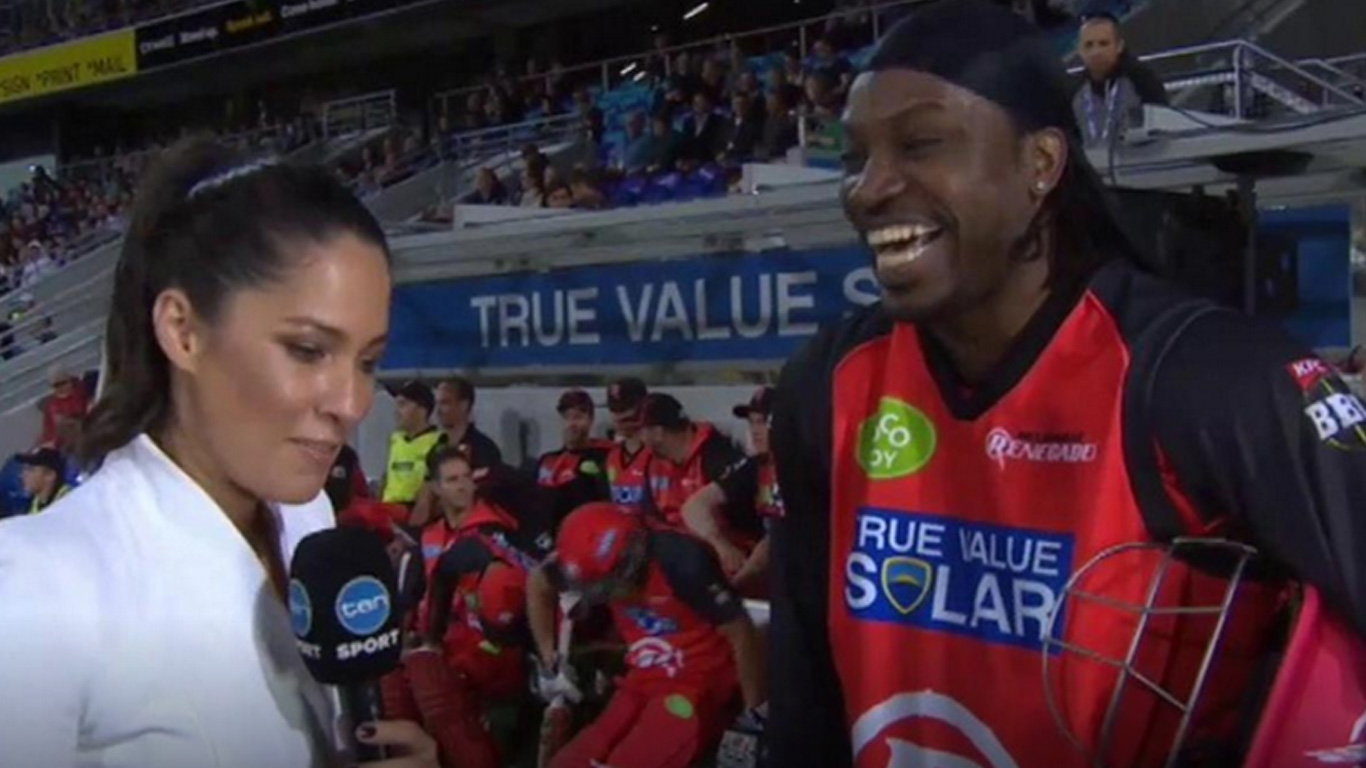 "Sorry," he added, breaking into a big laugh.

Cricket Australia and Big Bash League officials did not see a funny side and condemned Gayle.

"I heard Chris's comments and they're disrespectful and simply inappropriate," BBL boss Anthony Everard said in a statement late Monday.

"There's just no place in the BBL or -- for that matter, cricket anywhere -- for that sort of behaviour."

Cricket Australia chief James Sutherland offered support for McLaughlin saying Tuesday that no one should have to face such comments, which were "completely out of line" and "inappropriate for the workplace".

Speaking on Jane McGrath Day at the Sydney Cricket Ground, which during day three of a Sydney Test is traditionally called Ladies' Day, he left open the question of Gayle facing punishment.

At 4:30pm the @RenegadesBBL CEO will provide an update on the outcomes surrounding Chris Gayle's actions. LATEST: https://t.co/F4YmNML5Eo

"I don't think at the end of all this Chris will be under any illusions as to what we think of it.

"I'm not ruling out sanctions," he added, saying Gayle was not in a "night club" and his behaviour was "not cool".

The opener was even more apologetic on Tuesday morning, but tried to brush it off as a joke blown out of proportion.

"There wasn't anything meant to be disrespectful or offensive to Mel," Gayle told reporters.

"If she felt that way, I'm really sorry for that.

"There wasn't any harm meant in that particular way... It was a simple joke. The game was going on. Entertainment, things get out of proportion, but these things happen... We have to move on. Simple."

The failed flirt lit up social media with former England captain and Ten commentator Andrew Flintoff tweeting, "Big fan of @henrygayle but he made himself look like a bit of a chop there."