In 2012 Kalpana Rajesh, a chemical engineer, was expecting her second child. Torn over leaving her elder kid in daycare while working in a corporate office, Kalpana decided to make the best use of her free time by indulging in a hobby that she hoped would eventually help her quit her job.
But what she hadn’t dreamt of was having that same hobby branch out into 45 different sections across India, few even in the US and Singapore; and not to mention appreciation from K.T. Rama Rao, Telangana IT minister, for her outstanding work.
“Since I was pregnant, I was staying with my mother in L.B. Nagar,” says Kalpana. When zeroing in on a creative activity, she didn’t really have to look that far. “My mother is very good with the designs for Pelli Poola Jada, a wedding hairstyle usually done with flowers. I asked my mother to make some designs. But she couldn’t pitch in as she is a Central government employee and hardly gets any free time,” she says.
With absolutely zero knowledge and prior experience of running a business, Kalpana started hers from home. “I created a Facebook page, Pelli Poola Jada, and put up 10 designs,” she says.
Within eight months, Kalpana broke even – she had initially made an investment of Rs 50,000 — and offers started pouring in. “One of the complaints that brides from the city have is lack of options for Pelli Poola Jada. They are difficult to find and the designs aren’t that contemporary,” says Kalpana. 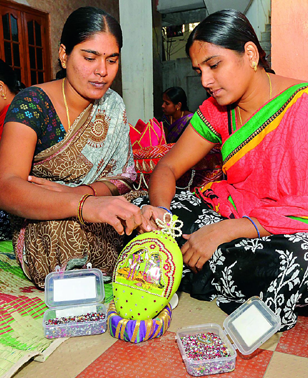 women employed at the L.B. Nagar branch, which is also the head office
It takes at least eight hours to make one Pelli Poola Jada and Kalpana makes sure that there eight people working on one such arrangement.
“The head office is in L.B. Nagar and when I expressed my inclination to start this business, the neighbourhood women showed genuine interest. During off season they get paid up to Rs 8,000 and during season they are paid Rs 10,000. There are approximately four to 10 women in every branch and majority of them are from lower middle-class families,” says Kalpana, who further hired more through a chain reaction. “Whenever a woman referred someone else, they would get a bonus. So it wasn’t that difficult to source labour.”
The flowers are sourced locally and the team even grows some on their own land. “Whatever piece of land we find, we grow flowers in it. Some are growing flowers in their homes, some in offices and we have also leased land in Shamshabad, West Godavari and in Tamil Nadu to grow flowers. We stick to the local variety as it’s easier to procure and deal in them,” she adds. Apart from personal deliveries, the flower arrangements have also been spotted at Shahid Kapoor-Mira Rajput’s wedding. “Manchu Manoj’s wife Pranathi Reddy was one client that I directly interacted with; otherwise I usually see my flower arrangements in different serials and weddings, so was the case in Mira Rajput’s wedding,” she says. 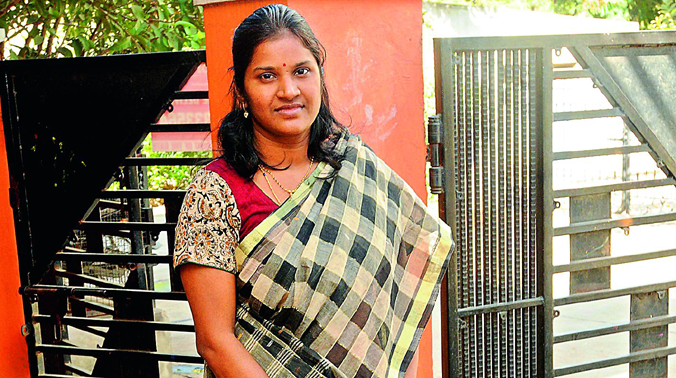 Kalpana Rajesh
From 10 designs to 130, from a single office to branches across the world, needless to say Kalpana is no longer dissatisfied with what she does. “My husband is a scientist and none of us have ever had a business of our own, so it was overwhelming to begin with. But now, I am happy. I wish I had started when I was getting married, I wouldn’t have to struggle,” she says.

Those distinguished men and their marvellous motorbikes