Hair may have retired as an umpire seven years ago but he feels the menace of chucking shows no signs of disappearing. (Photo: PTI)

Chennai: December 26 in 1995 turned out to be a defining day in the history of cricket. The opening day of the Boxing Day Test between Australia and Sri Lanka saw umpire Darrell Hair call legendary Lankan off-spinner Muttiah Muralitharan for no-ball seven times for chucking.

Hair wasn’t forthcoming when Deccan Chronicle first contacted him, saying that his views on cricket was somewhat “outdated” as he has been out of cricket for seven years. “I doubt whether anyone really cares about what I think,” the Australian added.

But he relented in the end to answer this newspaper’s questions. “I was a long-time crusader against illegal bowling action and I fought hard to rid the game of it. I believe coaches encourage chucking and umpires are under pressure not to take action. Unfortunately, all the ICC did was change the rules to permit throwing and lessen the powers of umpires to take action then and there,” said the 63-year-old. 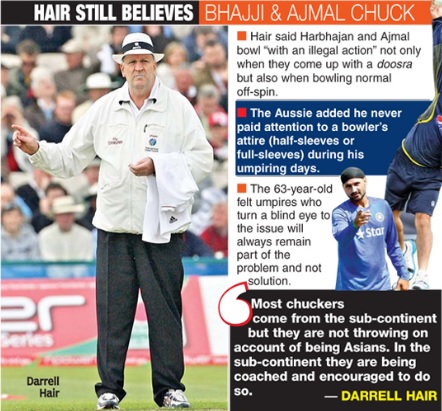 Hair may have retired as an umpire seven years ago but he feels the menace of chucking shows no signs of disappearing. He still believes Harbhajan and Ajmal bowl “with an illegal action” not only when they come up with a doosra but also when bowling normal off-spin.

“It is possible to bowl an over-spin delivery without bending and straightening the elbow but it’s impossible for a right-arm spinner to make the ball spin from leg to off without straightening his arm during the delivery swing,” the Australian said.

Of late there has been a lot of suspicion on spinners who bowl with full sleeves. India ‘A’ coach Rahul Dravid went to the extent of lauding Pragyan Ojha, who was on a comeback trail in a first-class match after being reported for suspect action, for being confident enough to bowl with half-sleeves.

However, Hair, a veteran of 78 Tests and 139 ODIs, said he never paid attention to a bowler’s attire during his umpiring days. “The only thing that mattered to me was whether he was breaking the game’s law,” he added.

Even though Hair doesn’t watch much cricket these days, he readily came up with the names of a few bowlers with clean action. “Graeme Swann and Nathan Lyon bowl with a fair action. People will call me a racist because both of them are white but unfortunately it is the state of cricket we find ourselves in now thanks to international administrators.

Also Read: Shikhar Dhawan may not go for action check, to refrain from bowling

The common thread in recent clampdowns is most of them were exposed only when they tried a few variations. For example, Narine got into trouble for a quicker ball. How tough is it for an umpire to focus on the action of bowlers who always strive for variations in T20?

“Both umpires have a duty to enforce the laws of cricket and they must take action if someone bowls an illegal delivery. By not doing so, they are rewarding cheating as well as penalising the batsman who has to find a way to play an illegal delivery without loosing his wicket. Umpires who turn a blind eye to the issue will always remain part of the problem and not solution,” Hair added.