Why lives of troops being put at risk, ask aggrieved families of BSF plane crash victims

Family members of BSF officer Rajesh Shivrain break down while paying tribute to him during a wreath laying ceremony for the victims of Dwarka plane crash, at Safdarjung airport in New Delhi (Photo: PTI)

New Delhi: "Why are old aircraft being used and lives of troops put at risk?" This was among the questions Union Home Minister Rajnath Singh had to face today from the families of the 10 personnel killed in a BSF aircraft crash in the national capital.

A distraught and agitated daughter of Sub-Inspector Rabinder Kumar, who was among the 10 personnel killed in yesterday's crash, asked Singh and BSF Director General D K Pathak to "address" these issues so that soldiers on the line of duty are not killed in such mishaps.

"Jawab dijiye (give me an answer). Why only soldiers get killed in such accidents and it never happens to VIPs," she asked as soon as Singh began meeting the families after paying tributes and placing floral wreaths on mortal remains of the occupants of the ill-fated Superking B-200 plane. 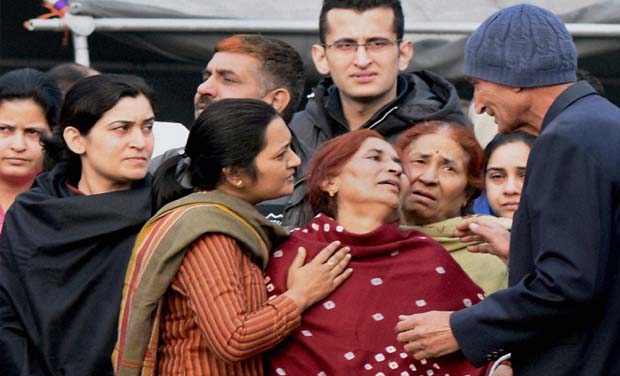 A composed and moist-eyed Home Minister consoled the young woman and assured that their grievances would be looked into as he said he would review each and every aspect that they have underlined.

The silence of the foggy and wintry morning at the airstrip was broken when the family members, one by one, started wailing, and their screams rent the sombre air.

The next of kin of other personnel who had come to pay their respects to their near and dear ones at the Border Security Force hangar at Safdarjung airport here had more or less the same grievances and stories to tell.

BSF plane crashes in Delhi, all 10 onboard dead

"My son-in-law told me that the planes in the BSF air wing are getting old and new ones are expected in sometime. I don't know when will these new aircraft come but surely he will not be there to see them," said the father-in-law of the co-pilot Rajesh Shivrain.

The family members of another personnel said they were being told that the BSF fleet is growing old and new acquisition is stuck in "red tape".

"This is worrying, for us and everyone who is associated with this wing. We just want that a soldier's life should not be put at stake by using old machines," a family member of Assistant SI D P Chauhan said. 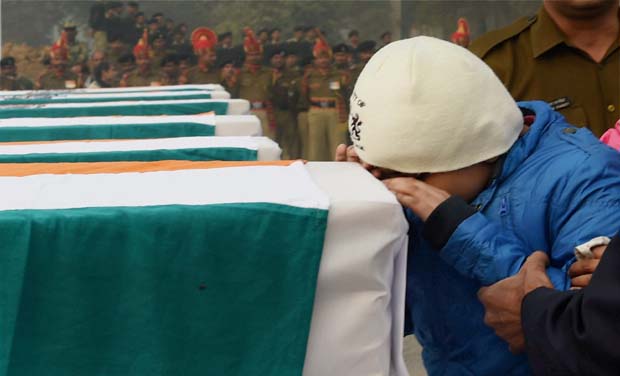 The family of the chief pilot, Bhagwati Prasad Bhatt, said while he put his life at risk there was now a very uncertain future for his family.

"He just had a baby a few months ago. His wife is asking me what will she do? I have no answers to give to her. My son used to be away always for flying duties... I just want that what has happened to him and his colleagues should not happen to anyone else," Bhatt's inconsolable mother said.

Shivrain's wife Seema said her husband was flying an "outdated aircraft" and that she was proud that he did not shy away from his duty anytime.

"The official vehicle came to pick him early morning yesterday. He was supposed to attend the first school event of my young daughter, who is in UKG, last evening... He will be missed every time Pari (daughter) has an event at school," she said.

While the family members accused the force and the government of being careless, BSF DG D K Pathak and Minister of State for Home Kiren Rijiju said after the event that the ill-fated plane was not "old".

They said it was absolutely "airworthy" and in "good" condition to fly. 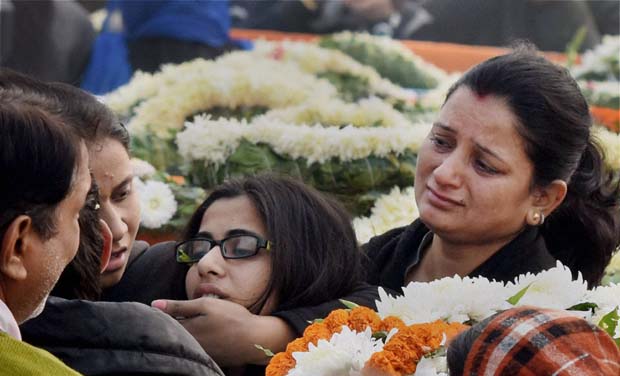 The ceremonial farewell of these fallen heroes was marked by the sounding of the bugle and last post by BSF personnel and a guard of honour was accorded.

While some bodies have been sent by the force by road to their homes, some are being sent by helicopters for funeral rituals.

The DGCA is investigating the crash of the 11-seater plane, registered as VT-BSA, that was about 20-year-old and was bound for Ranchi. The small BSF plane ferrying the force's technical personnel to Ranchi crashed near Dwarka and burst into flames just outside IGI airport shortly after takeoff killing all 10 people on board.