BSF plane crashes in Delhi, all 10 onboard dead

The remains of the small BSF plane that crashed outside the airport in New Delhi (Photo: PTI)

New Delhi: All 10 people on board a Ranchi-bound BSF aircraft carrying technical personnel were killed when it crashed near Dwarka in southwest Delhi and burst into flames just outside New Delhi’s IGI Airport shortly after takeoff on Tuesday morning. The small Beech Superking B-200 plane (registration number VT-BSA) crashed outside the airport boundary wall, on the western side of IGI. The chartered flight took off from IGI’s Runway 28 at 9.37 am and crashed within minutes outside the boundary wall. The aviation authorities have ordered a probe.

“It is unfortunate that all 10 people, including the pilots, died in the crash,” minister of state for civil aviation Mahesh Sharma said. There were two pilots on board. “It is a matter of probe what led to the crash. We can only tell after the inquiry what were the reasons or lapses that resulted in this incident,” he added. 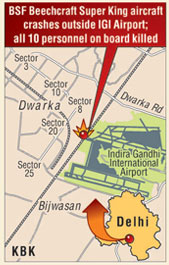 DCP (IGI airport) D.K. Gupta said the Delhi Police has filed an FIR for negligence against unknown persons under Sections 304(A), 336, 337 of IPC. He added that the police was waiting for the DGCA’s report on findings

of the black box, on the basis of which further action will be taken.The 10 people on board the ill-fated aircraft comprised the pilot, co-pilot, six technicians, one engineer and one crew member. PTI identified the victims as chief pilot and BSF deputy commandant Bhagwati Prasad Bhatt; Rajesh Shivrain, co-pilot and second-in-command from SSB; deputy commandant D. Kumar, inspectors Raghvendra Kumar Yadav and S.N. Sharma, sub-inspectors Ravindra Kumar, Surendra Singh, C.L. Sharma, ASI D.P. Chauhan and constable K.R. Rawat. The 11-seater plane had been inducted into the BSF in 1994-95, a spokesman said.

PTI reports said the ill-fated twin-engine Beechcraft Superking suddenly took a kind of U-turn towards the airport after taking off and hit a tree while apparently approaching to land after a possible technical problem, citing Air Traffic Control and DGCA officials. Three officers were among the victims, BSF officials said. BSF sources said the technicians were on their way to Ranchi to repair a helicopter.

The small plane reportedly smashed through a portion of the boundary wall at the edge of the airport near a railway track and landed in a sewage treatment plant, amid reports the pilots may not have sent any “Mayday” warning to the ATC. The closest residential settlements were about 1 km from the crash site.

The DG-level talks between India and Bangladesh due on Tuesday in Dhaka were cancelled after the crash, BSF sources said.

The bodies of all 10 victims were recovered and sent for post-mortem to Safdarjung Hospital. A BSF statement said the aircraft was “totally burnt” and the bodies of the pilots and crew “charred” to death.

Delhi Fire Service chief A.K. Sharma said 15 tenders were rushed to the spot to douse the flames. Union home minister Rajnath Singh briefed the Prime Minister on the tragedy and then rushed to the crash site. The chiefs of the BSF and SSB, D.K. Pathak and B.D. Sharma, also rushed to the accident site.

In a statement, DIAL, the operators of IGI Airport, said: “A serious tragic incident occurred outside the airport boundary wall, on the western side of the Indira Gandhi Internati-onal Airport, Delhi, this morning involving a Border Security Force aircraft. The Ranchi-bound chartered flight took off from Runway 28 of IGI Airport at 9:37 am and crashed within minutes outside the airport boundary wall. It was a Beech Superking B-200 aircraft with VT-BSA registration. There were a total of 10 persons on board. All of them are reported to be dead. IGI Airport has immediately activated the full emergency operation.”

Eyewitnesses said the plane hit a wall outside the airport’s technical area before bursting into flames and crashed into a water body. “We saw a plane spiralling down which crashed near the wall where work was going on. I could spot one body. A labourer who was working was also injured,” Suraj, one of the witnesses, said. The area was engulfed in dense smoke and fire, with pieces of aircraft spread around.

Civil aviation secretary R.N. Choubey said the authorities were in the process of setting up a committee of inquiry to probe the mishap. “We are trying to identify a pilot who has flown the type of aircraft that has crashed,” he said.

A four-member committee, headed by a senior AAIB official, will probe the crash. The committee of Inquiry to carry out the investigation into the causes of the accident is being constituted, an official statement said.

The identity of all 10 victims has been “medically established” and doctors have surgically reconstructed facial and bodily disfigurement suffered by them. “Two bodies were partially burnt while other eight bodies showed only injuries but no burning. Identity of all the victims has been medically established with the help of finger printing,” Sudhir Gupta, head of the AIIMS forensic department said.