When it’s faster to cycle

We have had the Ice Bucket Challenge, Favourite Books Challenge and after what Ali Naqi and his friend Asad attempted, we might soon have a Cycle-Your-Way-Round-The-City Challenge. Navigating through Hyderabad’s torturous traffic is a nightmare that everyone has resigned themselves to; that was until the two friends decided to try something different.

“We often go to Secunderabad Club, and every time we go there, the traffic is terrible. So I challenged my friend, Asad, that I would one day race him till there on a bicycle,” says 19-year-old student Ali, also a freelance graphic designer and a photographer. “The idea sounded stupid but fun, which is why we decided to do it and make a short film about it,” says Ali.

In a video titled The Hyderabad Traffic Race, Ali, who was riding a 21 speed mountain bike, competed with his friend who was driving a Volkswagen Polo. They started from Dharam Karam Road, Ameerpet, and ended their race at the Secunderabad Club; the distance was approximately seven kilometres. “Asad took 55 minutes to get to the finish point, whereas I took 40 minutes even though I stopped in between to drink water, fix my camera and GoPro mounts etc.,” he says. 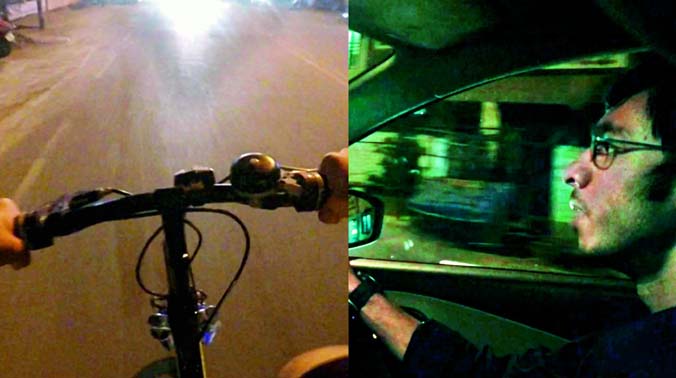 Screengrabs from the 4.20-minute-long video, The Hyderabad Traffic Race, where Ali and Asad raced till Secunderabad Club
The 4.20-minute-long video shows the two friends making their way to the finish point at around 7 pm, when the traffic is at its worst. “The video was shot on November 10. Even though we didn’t have any deadline, I preferred making one for ourselves,” adds Ali.

And though the two didn’t expect to gain anything out of this social experiment, the response has been tremendous. “I knew people would like the idea, because everyone deals with the terrible (Hyderabad) traffic, but I did not expect more than a few hundred views at all; presently, it has got 10,337 hits,” he says.

“The purpose of the video was to take something as simple as traffic and give people a new, fun viewpoint. Also, I would like to point out that I was riding with a helmet, and reflective clothing. I recommend that you do the same whenever you ride a bicycle in the city.”