New Delhi: Infosys co-founder Narayana Murthy had taken to social media to clarify that he has not given any speech on Prime Minister Narendra Modi.

In his Facebook post, Mr Murthy wrote, “I have been receiving several messages from friends and colleagues about a supposed speech with my name on it. I am told this has been circulating over WhatsApp. Since I am not able to reply to everybody individually I am posting my response here. While I have respect for the PM, as evinced in my various interviews over the past couple of years, this message/speech is fake. This style of prose is not reflective of how I think, write, or speak.” 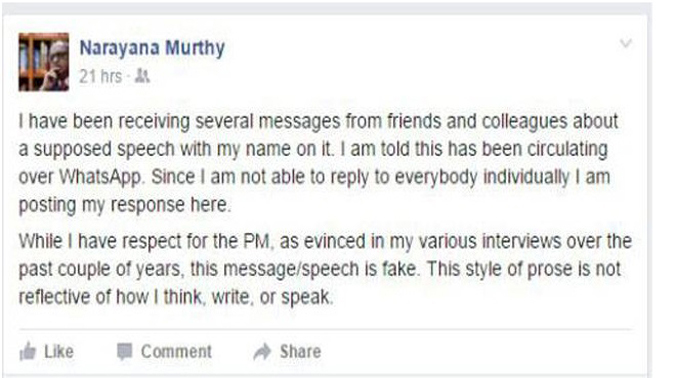 In the recent Lok Sabha debate on ‘intolerance’, Congress Vice President Rahul Gandhi said "People like Narayana Murthy, Raghuram Rajan and P M Bhargava are among the many protesting... They are disturbed like millions of other people. Respect them and try to understand what is disturbing them. Go and listen to them."

Recently, Mr Murthy had said that there is fear in the minds of people belonging to the minority community in India. He also said that the government should instill confidence in them.

He said, “I am not a politician, I am not interested in politics, therefore, I don't want to comment on that but the reality today is that there is considerable fear in the minds of minority in India.”

Lockdown likely to be extended: Congress after all-party meet with PM