After being given out caught behind off the last ball of the fifth over from Morne Morkel, Vijay showed dissent at the decision. (Photo: AP)

Dubai: Indian opener Murali Vijay on Sunday was fined 30 per cent of his match fee for showing dissent against the umpire after being given out in the ongoing fourth and final cricket Test against South Africa in New Delhi.

"India's Murali Vijay has been fined for breaching Level 1 of the ICC Code of Conduct during day three of the fourth Test between India and South Africa in New Delhi on Saturday," the ICC said in a statement.

Vijay was fined 30 per cent of his match fee by match referee Jeff Crowe. 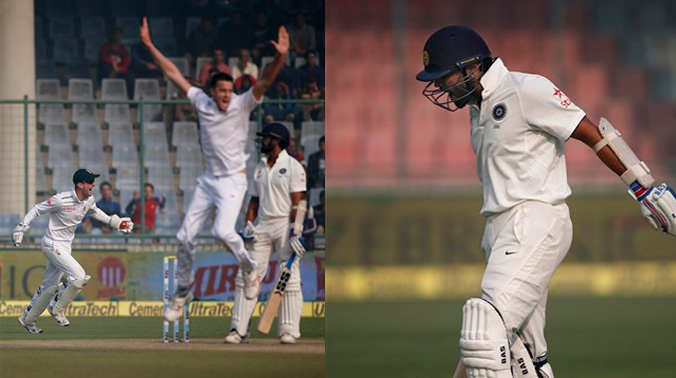 The player was found to have breached Article 2.1.5 of the ICC Code of Conduct for Players and Player Support Personnel, which relates to "showing dissent at an umpire's decision during an international match". (Photo: AP)

After being given out caught behind off the last ball of the fifth over from Morne Morkel, Vijay showed dissent at the decision by pointing at his arm guard as he walked off. (Photo: BCCI)