New Delhi: The opening day of the fourth India vs South Africa Test provided what had been missing from the entire series so far. It offered a keen contest between the bat and the ball on a track that required the batsmen to graft and put a price to their wicket, and it was India who stole the final session of play after South Africa had dominated the opening two periods.

Ajinkya Rahane’s gritty, unbeaten 89 — that took India from 139/6 at tea to 231/7 at stumps — was the story of the day, highlighting what is required in the longer format of the game. He was the architect of India’s resurrection, battling his way to a maiden half century on home soil. His knock came off 155 balls, including nine boundaries and two sixes.

South Africa off-spinner Dane Piedt – playing only his second Test after his debut in 2014 – was the other star of the day. The little-known offie took 4/101 in 34 overs, showing exemplary control, guile and flight that had the Indian batsmen in trouble.

In a series that has been dominated by spin-aiding conditions with games ending within three days, Piedt and Rahane were a welcome and refreshing change. 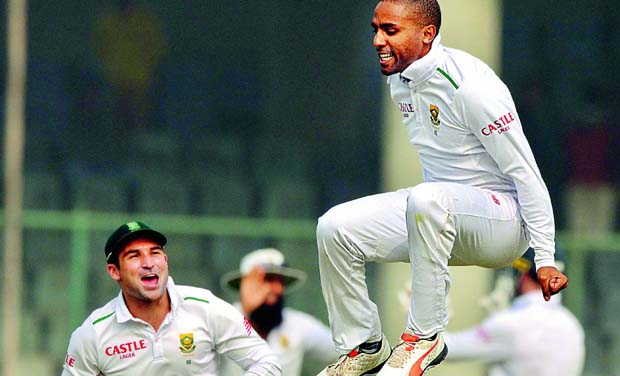 The 25-year-old Piedt, who replaced Kagiso Rabada, made good use of the Kotla track that kept low and offered variable turn. His figures were a testimony of what he brought to the visiting team, who have been on the back foot since the start of the Test series.

It was hard to believe he was playing only his second Test that too after a year’s gap, and one wondered what he could have done on the Jamtha track in Nagpur, venue for the third Test.
It also brought to the fore lack of application from the home batsmen, exposing them in testing conditions.

The Kotla track, unlike that of Mohali (first Test) and Nagpur, wasn’t exactly unplayable. It required gumption and a lot of patience but none of the home batsmen – except Rahane and skipper Virat Kohli – were up for it.

From 60/1 at lunch, India had succumbed to 139/6 at the tea break as South Africa tightened the noose. It called for a fighting knock and Rahane stood up for it, seeing off a tough final session to ensure the hosts finished the day on a decent score.

Rahane assessed the situation indulging in singles and leaving the good balls, before going for the shots – a characteristic clearly missing when his colleagues were at crease.

India’s innings was built around the fourth-wicket partnership between Rah-ane and Kohli (70 off 102 balls) and then Rah-ane and Ravindra Jadeja got together. Their seventh-wicket stand of 59 in 113 deliveries carried India to 231/7 — the highest total in this series.

Earlier, Kohli called it toss right for the fourth time and had no hesitation in batting first. The morning session was a keen contest with Murali Vijay and Shikhar Dhawan having a testing time. Kyle Abbott (3/23) bowled cleverly and forced the batsmen to adopt a cautious approach before Piedt came into play to remove Vijay.

But his innings was cut short on an unfortunate note when the skipper swept it hard only to find Temba Bavuma at short leg. The ball hit Bavuma on the thigh, ballooned and was pouched brilliantly by wicketkeeper Dane Vilas. Rohit Sharma and Wriddhiman Saha fell cheaply, with the former guilty of playing an atrocious shot.

South Africa made three changes to their XI bringing in Bavuma, Piedt and Abbott in place of Stiaan van Zyl, Kagiso Rabada and Simon Harmer. India brought in Umesh Yadav in place of Amit Mishra.