Chennai opens its doors to the stranded, rallies support online

Chennai:  As Chennai battles the worst flood situation it has seen in decades, residents of the city are not waiting around for the government to provide relief but are taking the lead to help those in need.

Many residents took to social media and offered help to those stranded in the rain. The opened their doors for those who had no shelter to protect them from nature’s fury. Hundreds were left without any place to go as all flights from Chennai were cancelled.

Our flat in #ValmikiNagar, # Thiruvanmyur is dry with Internet and electricity. Please get in touch if you need help #ChennaiFloods

Citizens, whose homes were not inundated by rainwater, offered accommodation and shared their numbers online for contact. A google spreadsheet has been making the rounds on Twitter where those who can provide shelter to fellow citizens have put down their names, address and contact numbers. 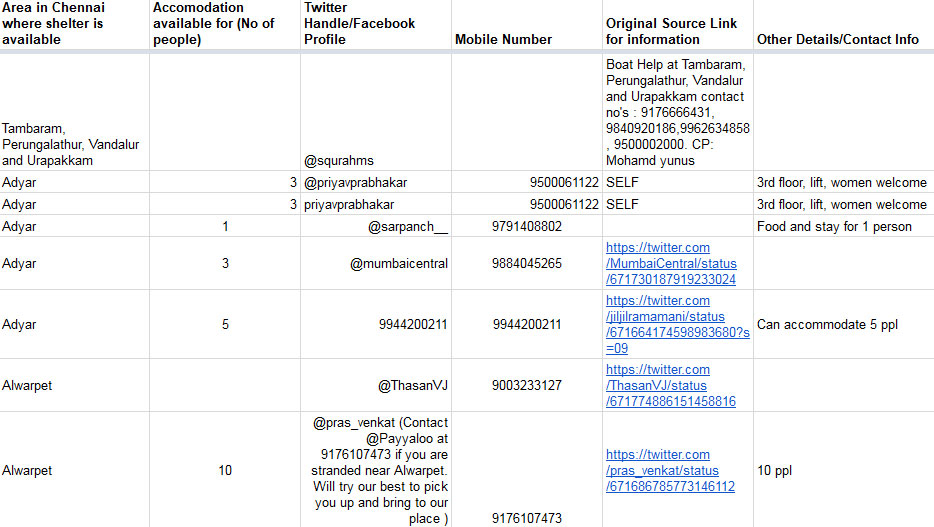 Anxious citizens sought help and asked for assistance for their near and dear ones who were unreachable and stuck far away from home due to the rains.

NGOs, activists and individuals rallied support online to carry out rescue operations for those stuck in rain battered areas. Their efforts included getting rescue boats and distributing food to the victims.

The Chennai Corporation has announced emergency contact numbers for all the regional zones in the city.

People can contact the following numbers in case of any emergency:

Other office numbers that can be contacted for assistance are as follows: