Ranveer Singh seems to have started a new trend — that of the man skirt. In the west, Jared Leto, Kanye West and designer Marc Jacob have stepped out wearing man skirts, but not many had given it a try closer home.
Ranveer has been spotted sporting the man skirt at a recent award function and at the launch of a song from Bajirao Mastani. While at the former event Ranveer tried to keep it more western, for the song launch he picked up an Indian look. A huge credit for the look, however, goes to his stylist Nitasha Gaurav.
Says Nitasha, “Traditionally, a lot of Indian costumes are bifurcated. And it is not unusual for Indian men to wear some form of a skirt. If you look at lungi, for example, it is like a wrapped skirt. Having said that, I would agree that this is definitely a polarising look. Some people have really loved it, while some didn’t understand it at all.”
Nitasha also stresses on the point that the look is not meant for everybody. “You have to feel committed to the look and feel confident in it. Only if you feel good in it, will you look good in it,” she adds. 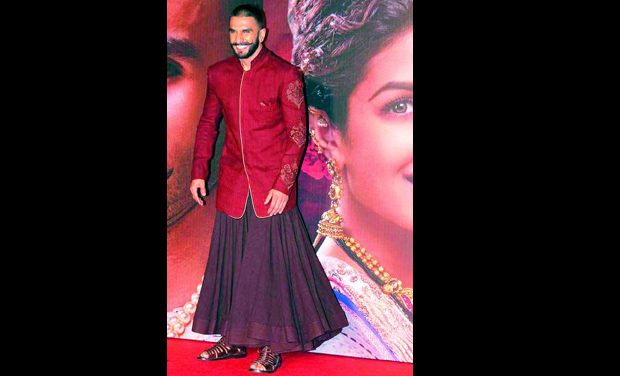 For the launch of a song from Bajirao Mastani, Ranveer paired a skirt with an ethnic jacket
Talking about how to carry off the look, Nitasha has a few suggestions. “Ranveer looked really manly in the look since he is a masculine guy. At the Bajirao... song launch, he was wearing a churidaar under the skirt. You don’t want to wear it by itself so wear it over churidaar or slim pants. You can wear a knee length skirt, like he did at a recent award function or you can wear longer length, depending on your height and weight,” says Nitasha adding, “Footwear too depends on the look — if it’s an Indian look, you could go with sandals, and if it’s a western look, I suggest formal shoes. It also depends on the length of skirt — for a pleated skirt, you need something cleaner like shoes or sandals with straps and if it’s a ghagra, pair it with gladiators.”
Stylist Rick Roy believes that this look by Ranveer, who is trendsetter, will be picked by many. “Men generally don’t have options to try out, it’s only the women who get to experiment. So I am glad that Ranveer is trying to do something new,” says Rick adding, “It’s a very loud outfit so I would suggest not to overdo it. Also, keep the skirt as the focus and keep the rest of the look simple.”
He continues, “Don’t wear too long a top because you would only be adding bulk to the length. Don’t wear too loud colours, keep it understated.”