Ravichandran Ashwin claimed 12 wickets in the match as India swamped South Africa by 124 runs with two days to spare in the third Test and clinched the Test series. (Photo: AP)

Nagpur: After the limited-over debacle, Team India clinched the Test series against South Africa after beating them by 124 runs here on Friday.

The wait is over. The moment is here. India take a 2-0 lead in the series. Well done #TeamIndia #IndvsSA https://t.co/ms8EsRdUqW

There were reports about the pitch playing spoilsport in the four-match rubber but it did provide results, with two-day breaks for the cricketers to unwind and prepare for the next mission.

South Africa started Day Three with Hashim Amla and Dean Elgar fighting out the Indian spinners on a difficult strip.

AB de Villiers (9) could not stand the test of time too. Ashwin set him up from the onset and threw a wrong one at him for another leg-before dismissal.

But the tourists built castles in the air with skipper Hashim Amla and Faf du Plessis building a partnership.

The Proteas, who resumed after lunch at 105-4 chasing a target of 310, went to tea on the third day at 151-6 in their second innings on a dusty, deteriorating pitch at the VCA Stadium.

But the 72-run stand for the fifth wicket ended with Amla falling prey to Amit Mishra. Amla faced 167 balls for a well fought 39.

Ravichandran Ashwin, who found his mojo in the whites, kept rattling the Proteas batsmen. Elgar (18) was the first to depart this morning, trapped leg-before by the spinner. 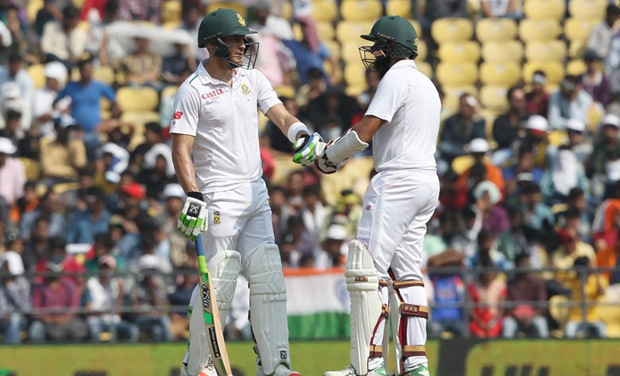 Amla and Du Plessis, who came together in the morning session after the fall of the fourth wicket at 58, defended for 46.2 overs to put on 72 runs for the fifth wicket. (Photo: BCCI)

Amla negotiated 167 deliveries and du Plessis faced 152 balls, both making identical scores of 39 before being dismissed by leg-spinner Amit Mishra in the space of six deliveries before tea.

.@MishiAmit gets not one, but two big ones in quick succession. Amla & Faf back in the hut. #IndvsSA https://t.co/3tfyHPjF6O

Amla, whose highest score in the series is 43, edged a catch to his Indian counterpart Virat Kohli at gully. In Mishra's next over, du Plessis played over an attempted pull and was bowled.

However, the battle was not over for the tourists. JP Duminy (19) – a hot customer in the Indian Premier League with a good idea about the conditions – stepped out to bat and started with two handsome boundaries.

But the southpaw did not last long either. He was deceived by Ashwin.

South Africa lost their last three wickets in a span of 18 runs.

Ashwin turned out to be the star for the hosts with 12 wickets, Mishra claimed three in the second innings and a match haul of four wickets.

A target of more than 300 runs has been chased successfully just once on Indian soil -- by the home team who made 387-4 to defeat England in Chennai in 2008.

Prolific off-spinner Ravichandran Ashwin struck in the day's fourth over when left-hander Dean Elgar edged a ball off the pad to Cheteshwar Pujara at silly-point after making 18.

AB de Villiers, the world's top-ranked Test and one-day batsman, made nine during an uncomfortable 21-ball stay when he was deceived by a straight ball from Ashwin and was trapped in front of the wicket.

Ashwin vs AB - What a juicy contest it was this morning with Ashwin all smiles at the end of it #IndvsSA https://t.co/hBcLwV5fJm

On Thursday, Ashwin finished with five for 32 and Jadeja took four for 33 on a dusty surface at the VCA stadium to bowl South Africa out in 33.1 overs, giving India a first-innings lead of 136 runs.

India were themselves dismissed for 173 runs in their second knock, setting the top-ranked Proteas an improbable target of 310 on a pitch where the ball is turning sharply and keeping low.

South Africa, needing a win to level the four-Test series, ended the second day's play on 32 for two, with Dean Elgar unbeaten on 10 and skipper Hashim Amla on three.

The tourists started the third day requiring 278 runs more on a dicey pitch that has already claimed 32 wickets over the first two days -- 20 of them on Thursday itself.

Targets of over 300 runs have been chased successfully just once on Indian soil -- by the home team which made 387-4 to defeat England in Chennai in 2008.

Starting the day at 11-2, the Proteas suffered a sensational collapse as they lost three wickets for one run in the first four overs to slip to 12-5.

The world's number one Test side were at that stage in danger of falling below their lowest ever total of 30, but a defiant 35 by JP Duminy saved them the blushes.

But South Africa's meagre score was the lowest total by any team against India, coming in below Sri Lanka's 82 in Chandigarh in 1990.

Amla's poor run in the series continued when he gloved an intended sweep off Ashwin to Ajinkya Rahane in the slips after the ball bounced off the wicket-keeper.

Amla, who scored 43, 0 and seven in the three previous innings, managed just a single run this time before walking off even before the umpire gave him out in the first innings.

Dangerman AB de Villiers failed to score while Faf du Plessis was bowled for 10 when the batsman attempted an ugly heave and missed the line of the ball.

Duminy, who hit two sixes off Jadeja, was ninth out when he was trapped leg-before by leg-spinner Amit Mishra, who was required to bowl just three overs in the entire innings.

When India batted a second time, Shikhar Dhawan (39) and Cheteshwar Pujara (31) showed the way to tackle the turning ball by adding 44 for the second wicket.

Leg-spinner Imran Tahir, who was surprisingly kept out of the attack till the 25th over as India moved to 82-2, picked up five wickets for 38 runs to restrict the Indian innings.

From a comfortable 97-2, India slipped to 108-5 before being all out in the post-tea session.

The tourists, who lost the first Test in Mohali before the rain-hit second game in Bangalore was drawn, need a win to take the series into the decider in New Delhi starting December 3.