Hyderabad: The initial euphoria of cab owners that was generated by app-based cab services like Uber, Ola and Taxi for Sure has disappeared as the companies have reduced the incentives and bonuses paid to the driver per trip. Drivers and vehicle owners say they were promised business worth Rs 60,000 to Rs 90,000 per month following which thousands had bought cabs. But now their income has come down to a little over Rs 40,000 per month. Several IT employees had also purchased vehicles and attached them with Uber and Ola. A few B.Tech graduates doing small time jobs had also become car owners-cum-drivers.

However, with more vehicles getting attached with Uber and Ola, managements have started cutting down on the incentives and bonus. Consequently, some of the drivers-cum-owners attached with Uber went on strike stating they were not able pay to even EMIs on their car loans with an income of Rs 40,000 per month. However, another group of drivers said Rs 40,000 to Rs 50,000 was good enough for them and those on strike were reportedly instigated by IT employees who had attached their cars expecting Rs 90,000 per month. The incentives given by Uber (mainly the Rs 300 per trip and Rs 5000 commission) was very clearly stated as an introductory offer from the company as they were setting up business in India. The company has never said that the offer would continue beyond a stipulated time.

“Earlier Uber and Ola would generate business of even up to Rs 90,000 but that is not the case now. But tell me Kaun se engineer ko Rs 50,000 tankhwa mil rahi hai saab (Which young engineer is getting `50,000 salary per month sir)?” asked Jameel Ahmed, owner-cum-driver of a car attached with Uber. He agreed that they used to earn up to `90,000 and even more around March but Uber and Ola keep changing the packages.

Lured by the offer of becoming “partners of app-based cab providers” and earning up to Rs 90,000 per month, thousands purchased vehicles through bank loans and some had even sold or mortgaged gold ornaments. While Uber and Ola did not give details of their fleet, it is estimated that there are over 25,000 cabs with these app-based cab service facilitators, the majority of them being with Uber. Drivers and cab owners said that due to the monthly earnings coming down to Rs 40,000-odd per month from September 2015, they are not able to pay their EMIs.

“We used to earn over Rs 90,000 until March this year. We used to work only for eight hours to 10 hours and make a minimum of 10 trips or bookings. From September, our earnings are not crossing Rs 40,000 per month, of which Rs 18,000 goes towards car EMI, another Rs 18,000 per month for fuel and another Rs 3,000 to Rs 5,000 towards maintenance and repairs if the vehicle is more than 10 months old,” said T. Rajasekhara Reddy, a cab owner-cum-driver who is also the general secretary of the newly formed Telangana Cab Owners Welfare Association.

This association has been formed recently to fight the anti-partner (anti owner-cum-driver) policies of Uber, Ola and Taxi For Sure. “The moment we started questioning them, Uber management has put me off-line. This means I am not connected with them and will not get any business. Now most of our colleagues have started working for 16 hours to 18 hours with all three app-based cab providers,” said B. Venkatesh Goud, another owner-cum driver.

Shiva Reddy, who worked as a lab technician in Singapore, jumped into the “cab partner” business after he returned to the city. B. Suresh (name changed on request) left his job at an ITeS firm, which was paying Rs 18,000 per month, and is now the owner-cum driver of a cab. Sajid Ahmed, who used to work for a private tours and travels agency that had attached their taxis with an IT firm, purchased a car by selling gold ornaments of his wife which were enough only for the down payment of Rs 2 lakh, and the remaining was a bank loan. The list goes on. 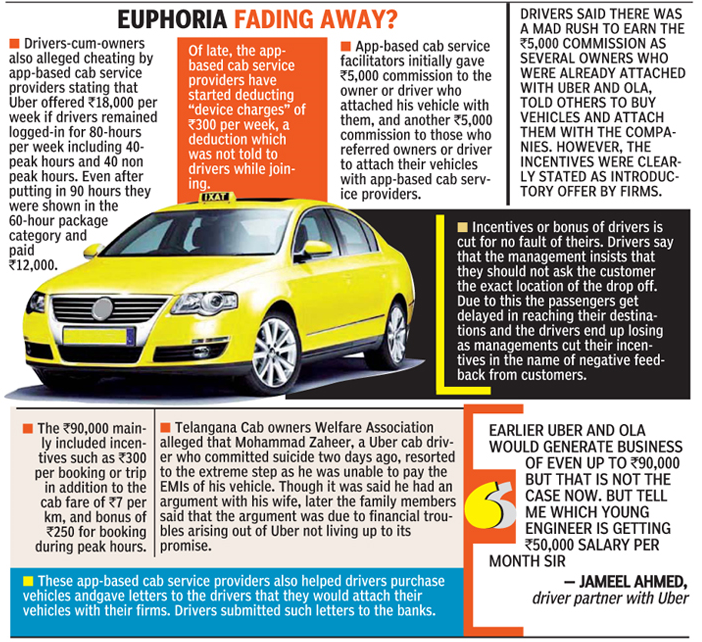 While SHE cabs and pre-paid taxis charge less than Rs 15 per km, Meru and Sky charge Rs 21 per km during day and Rs 26 per km at night. This is because Meru and Sky cabs have private contracts with GMR and their parking rate is Rs 220 at the airport per trip; that of SHE cabs is less as it is government controlled. “Meru pays Rs 170 for parking per trip and Rs 50 for user charge,” said Sadiq, assistant manager, Meru at RGIA.

For the pre-paid taxis driven by men, the rate for each destination was fixed by the government two years ago and the same is applied to SHE cabs. SHE cabs and pre-paid taxis pay `90 per trip including Rs 60 for parking and Rs 30 towards user charges. “Our rate is less as airport parking fee is minimum. Also, these rates were fixed for vehicles like Indica long back and should be revised now,” said Younus Md.

SHE cabs are a huge success; the counter is receiving 100 passengers daily but there are only 10 she cabs. GHIAL CEO S.G.K. Kishore said they wanted to provide as many modes of transport as possible. Cyberabad police commissioner C.V. Anand said though SHE cabs were launched several months ago, they were not getting regular business. “We spoke to IT firms, Hyderabad Security Council, GMR authorities and came up with this model. This would not have been possible but for the active support of Mr Kishore. We have more plans for SHE cabs,” he added.

None of the app-based cab service facilitators has replied to the allegations levelled by drivers and cab owners against them. Meanwhile, Union labour minister Bandaru Dattatreya and Telangana minister Nayani Narasimha Reddy have agreed to intervene in the suicide case of Uber driver Mohammed Zaheeruddin to ensure that drivers are protected from harassment and exploitation.

A delegation led by Telangana State Cabs and Bus Operators Association president Syed Nizamuddin called on Mr Dattatreya at his residence on Friday and informed him that Zaheeruddin’s suicide on November 17 was not because of family problems but due to financial problems arising out of the Uber management not giving the promised business.

The association made four major demands. They include inquiry into the suicide of Zaheeruddin, adequate compensation to his family, inquiry into the allegations of cheating against Uber and Ola managements and formation of rules and regulations for aggregators and a mechanism to protect the interest of nearly 50,000 drivers working in the Greater Hyderabad limits.

Later, association leaders briefed Mr Narasimha Reddy who forwarded the complaint to DCP East Zone V. Ravinder. He also assured them that the state government would take immediate steps to protect the interest of all drivers working with cab operators.