A body is removed from the Radisson Blu hotel, after it was stormed by gunmen during a attack on the hotel in Bamako. (Photo: AP)

Bamako, Mali: A U.N. official says initial reports from the field indicate that 27 people were killed in the attack on the Radisson hotel in Mali's capital.

Another U.N. official, U.N. Mali mission spokesman Olivier Salgado, said two extremists have been killed and that forces are going from room to room, checking for more casualties.

Earlier reports said that bodies of 18 people were recovered as special forces stormed the hotel in Mali's capital seized by gunmen on Friday.

"Eighteen bodies were found," a source told AFP on condition of anonymity, adding that French special forces from neighbouring Burkina Faso were in the hotel and "participating in operations alongside Malians".

Gunmen who stormed a luxury hotel in Mali's capital Friday and seized more than 100 guests and staff no longer have any hostages after a rescue operation by special forces, the government said.

"They currently have no more hostages in their hands," security minister Salif Traore told a news conference following a stand-off of several hours at Bamako's Radisson Blu.

According to Malian military, two gunmen have been killed.

The incident came a week after the deadly terror attack in Paris. Though there was no direct link between the two incidents, Mali has been at the centre of French military operations against Islamists in north Africa.

"Good news! All 20 Indians in the hotel in Bamako have been safely evacuated. Our Ambassador in Mali has confirmed," the External Affairs Ministry Spokesperson tweeted.

Employees of a Dubai-based company, these Indians were staying in the hotel permanently, the Spokesperson said in New Delhi.

Dozens of hostages managed to escape the early morning raid, but 138 people were trapped in the besieged hotel and the security ministry said at least three people had been killed.

Mali's north fell under the control of Tuareg rebels and jihadist groups linked to al-Qaeda in mid-2012 before they were beaten back by a French-led operation in early 2013. 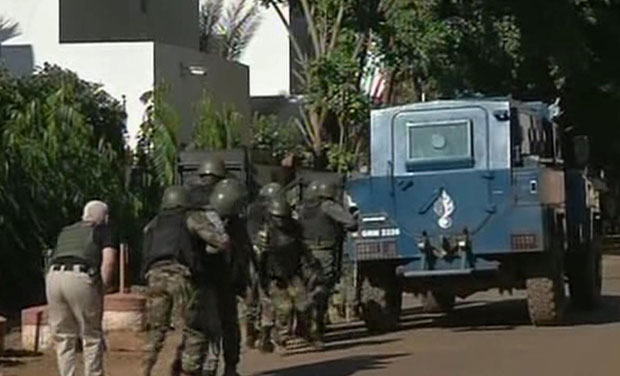 As the drama in Bamako was unfolding, EU ministers agreed at an emergency meeting in Brussels to tighten border controls after the Paris massacre which was orchestrated by a jihadist who had travelled between Syria and France.

Prosecutors in Paris also confirmed that three people had died at a house in a north Paris suburb used as a hideout by suspected attacks ringleader Abdelhamid Abaaoud, including him and his female cousin.

Abaaoud, a Belgian of Moroccan origin, and cousin Hasna Aitboulahcen were killed in an assault by anti-terror police on Wednesday. The identity of the third body has not been disclosed. 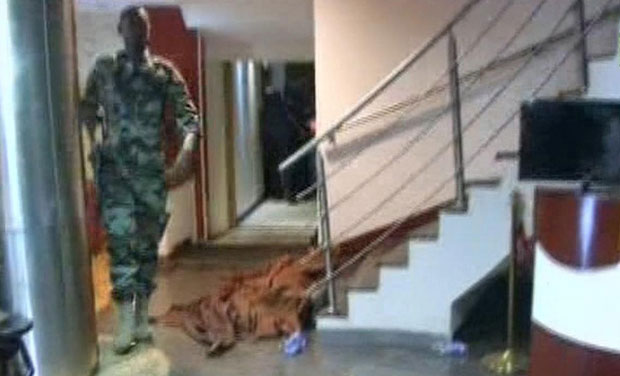 In Bamako, Malian special forces and police backed by members of the UN's MINUSMA peacekeeping force in Mali and French troops were seeking to end the siege where 170 people were initially seized.

Gunmen entered the 190-room hotel compound at around 0700 GMT (1230 IST) in a car with diplomatic plates and automatic gunfire was heard from outside, security sources said. 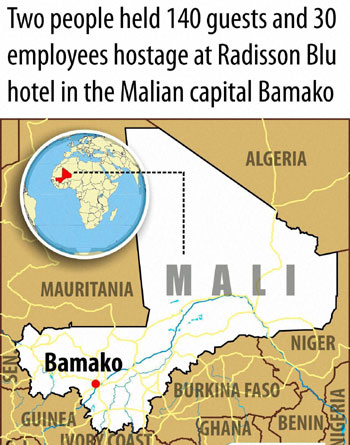 The hotel's owner, the Rezidor Hotel Group, said 138 people were still inside, with employees of the French and Turkish national airlines as well as Chinese among known to be those staying there.

Three hostages were killed, a spokesman for the security ministry in Mali said, but their identities were being verified.

The Rezidor Hotel Group, the US-based parent company of Radisson Blu, said there were a total of 170 hostages -- 140 guests and 30 employees.

The US embassy in Mali advised any American citizens in the country to shelter where they were, contact their families and monitor local media.

A French consultant who stays regularly at the hotel described it as "an obvious target for terrorists".

"The Radisson is at a crossroads, one of the roads was blocked. Security is provided by private guards. They passed a metal detector under cars," said the consultant, who spoke on condition of anonymity.

"I noticed that when they knew you, they didn't (use the metal detector) any more." 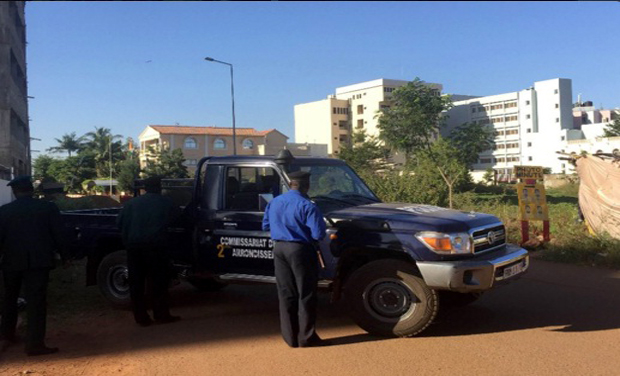 Malian troops outside the Radisson Blu hotel in Bamako, the scene of a hostage situation (Photo: AFP)

The Radisson attack follows a nearly 24-hour siege and hostage-taking at another hotel in August in the central Malian town of Sevare in which five UN workers were killed, along with four soldiers and four attackers.

Five people, including a French citizen and a Belgian, were also killed in an attack at a restaurant in Bamako in March in the first such incident in the capital.

Islamist groups have continued to wage attacks in Mali despite a June peace deal between former Tuareg rebels in the country's north and rival pro-government armed groups.

In mid-2012 the north fell under the control of jihadist groups linked to Al-Qaeda. They supplanted Tuareg rebels and imposed a brutal interpretation of sharia law on the region, with Bamako reeling from a military coup.

The Islamists were largely ousted from towns by an ongoing French-led military operation launched in January 2013, but they have since launched sporadic attacks on security forces from desert hideouts.

Despite the peace deal, large swathes of Mali remain beyond the control of government and foreign forces.

In a recording authenticated by Malian authorities this week, a jihadist leader in Mali denounced the peace deal and called for further attacks against France, which is helping national forces fight extremists. 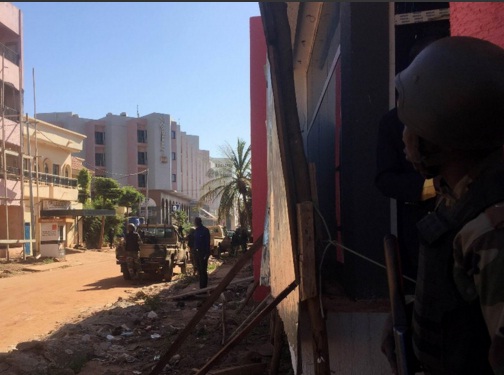 Malian troops outside the Radisson Blu hotel in Bamako, the scene of a hostage situation. (Photo: AFP)

Coronavirus deaths mount at alarming speed across US, Europe

Over 20 killed in oil tanker explosion in west Uganda