Paris raid ends; 2 jihadists killed including woman who blew herself up, 7 arrested in showdown

Paris: Amid gunfire and explosions, police raided a suburban Paris apartment where the suspected mastermind of last week's attacks was believed to be holed up Wednesday. The siege ended with two deaths and seven arrests but no clear information on the fugitive's fate.

The dead were a woman who blew herself up with an explosive vest and a man hit by projectiles and grenades, the Paris prosecutor said at the end of the seven-hour siege in the Paris suburb of Saint-Denis.

Woman blows herself up in Saint-Denis raid in Paris suburbs

France is 'at war' against terrorism, says President Francois Hollande

Prosecutor Francois Molins said the raid was launched after information from tapped telephone conversations, surveillance and witness accounts indicated that the suspected planner of the attacks, Abdelhamid Abaaoud, might be in a safe house in the district.

Authorities could not immediately confirm whether Abaaoud, a Belgian Islamic State militant, was killed or arrested Wednesday morning.

Investigators have identified 27-year-old Abaaoud, a Belgian of Moroccan descent, as the chief architect of Friday's attacks in Paris, which killed 129 people and injured 350 others.

A U.S. official briefed on intelligence matters said Abaaoud was a key figure in an Islamic State external operations cell that U.S. intelligence agencies have been tracking for many months.

Abaaoud was believed to be in Syria after a January police raid in Belgium, but bragged in Islamic State propaganda of his ability to move back and forth between Europe and Syria undetected.

Men behind the deadly Paris attacks

Speaking at the scene of Wednesday's raid, Molins said the operation began with a pre-dawn shootout and resulted in the capture of three people inside the apartment, the death of a woman who set off an explosive charge, and the death of "another terrorist ... who was hit by projectiles and grenades" in the initial assault.

He said two people were detained while trying to hide in the rubble, and two others were also arrested, including the man who had provided the apartment and one of his acquaintances. Police at the scene were seen escorting away one man who was naked from the waist down, and another wrapped in a gold emergency blanket.

"As things stand, it is impossible to give you the identities of the people detained, which are being verified," Molins said. "All will be done to determine who is who, and based on the work of forensic police, we'll tell you who was in the apartment - and what consequences it will have for the development of the investigation."

Molins and Interior Minister Bernard Cazeneuve did not specify whether any suspects might still be at large.

A police official not authorized to be publicly named because of police rules said four police officers were injured.

French President Francois Hollande praised the bravery of the security services and said that France was "at war" with terrorism by the Islamic State group.

"It is the entire country that's been attacked," Hollande told a gathering of French mayors. "For what it represents, the fight we are leading to eradicate terrorism. And simply for what we are."

In Saint-Denis on Wednesday, police cordoned off an area around the building, in a narrow street lined with low-rise buildings. Riot police cleared people from the streets, pointing guns at curious residents to move them off the roads.

The area is less than two kilometers (just over a mile) from the Stade de France stadium. Three suicide bombers blew themselves up Friday near the stadium during an international soccer match.

"We guessed it was linked to Friday night," said Yves Steux, barman at L'Escargot restaurant 250 meters (yards) from the assault."My wife panicked and was scared and told me not to leave, but I ignored her. Life goes on."

Baptiste Marie, a 26-year-old independent journalist who lives in the neighborhood, said a second large explosion was followed by "two more explosions. There was an hour of gunfire."

Another witness, Amine Guizani, said he heard the sound of grenades and automatic gunfire.

Saint-Denis is one of France's most historic places. French kings were crowned and buried through the centuries in its famed basilica, a majestic Gothic church that towers over the area. The district is home to a vibrant and ethnically diverse population and sees sporadic tension between police and violent youths. 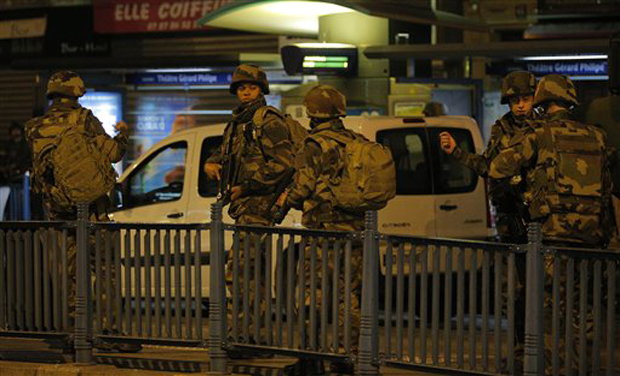 Soldiers arrive in St. Denis, a northern suburb of Paris, Wednesday, Nov. 18, 2015. Authorities in the Paris suburb of St. Denis are telling residents to stay inside during a large police operation near France's national stadium that two officials say is linked to last week's deadly attacks. (Photo: AP)

Seven attackers died in Friday's attacks, which targeted several bars and restaurants and the Bataclan concert hall, as well as the national stadium. The Islamic State group has claimed responsibility for the carnage.

Police had said before the raids that they were hunting for two fugitives suspected of taking part as well as any accomplices. That would bring the number of attackers to at least nine.

French authorities had previously said that at least eight people were directly involved in the bloodshed: seven who died in the attacks and one who got away and slipped across the border to Belgium.

On Tuesday, officials told The Associated Press they believed at least one other attacker was involved and they were working to identify and track down that suspect. Three officials spoke on condition of anonymity because they were not authorized to provide details about the ongoing investigation.

Surveillance video obtained by the AP also indicated that a team of three attackers carried out the shootings at one of the cafes. The video was among evidence authorities used in concluding that at least one other attacker was at large, the French officials indicated.

The brief clip shows two black-clad gunmen with automatic weapons calmly firing on the bar then returning toward a waiting car, whose driver was maneuvering behind them. Authorities believe the car is the same black SEAT-make vehicle that was found Saturday with three Kalashnikovs inside.

Police have identified one subject of their manhunt as Salah Abdeslam, whom French police accidentally permitted to cross into Belgium on Saturday. One of his brothers, Brahim, blew himself up in Paris.

Hollande said French aircraft carrier Charles de Gaulle had left to support military operations against IS in Syria. He called for a "large coalition" against IS militants to destroy a group that threatens the whole world and "commits massacres" in the Middle East.

The Paris attacks have galvanized international determination to confront the Islamic State group in Syria and Iraq, bringing France, Russia and the United States closer to an alliance.

Russian President Vladimir Putin ordered the missile cruiser Moskva, currently in the Mediterranean, to start cooperating with the French military on operations in Syria.

Meanwhile, U.S. Secretary of State John Kerry said a cease-fire between Syria's government and the opposition could be just weeks away. He described it as potentially a "gigantic step" toward deeper international cooperation against IS.

France - and the rest of Europe - remain on edge four days after the attacks. Two Air France flights bound for Paris from the U.S. were diverted Tuesday night - one to Salt Lake City and one to Halifax - because of anonymous threats received after they had taken off. Both were inspected and cleared to resume their journeys.

In the German city of Hannover, a soccer game between Germany and the Netherlands was canceled at the last minute and the stadium evacuated by police because of a bomb threat.

Lower Saxony state Interior Minister Boris Pistorius said the match was called off after "vague" information that solidified late in the day.

No arrests have been made and no explosives found. Pistorius said this may be because the plot was called off after the game was canceled.

"We won't know what would have happened if we didn't cancel it," he said.