As a backpacker, when Zac O’ Yeah stepped on to the bustling streets of Bengaluru, he was greeted by what he calls an “easy-going” area. Today, 25 years later, the heart of the city, Majestic still continues to inspire this Bengaluru-based Swedish author. In a sequel to Mr. Majestic: The Tout of Bengaluru, Zac is all set to take you along on an adventure, for the second time, with his latest novel Hari — A Hero for Hire.

“I have this sincere belief that any self-respecting mega metropolis should be the setting for a detective novel. You go to any bookshop and you’ll see thrillers set in Los Angeles, New York, Stockholm or Tokyo, but very few, hardly any at all in fact, are set in Bengaluru,” says Zac, setting out on changing it.

Employing his celebrated protagonist Hari Majestic, his new book is a medical thriller. “I’ve noticed that every street in Bengaluru has at least 14 pharmacies, three super specialty hospitals and eight piles and fistula clinics. So I thought Hari should explore that world,” quips the author whose sense of humour leaps out from the pages of his books into his quotidian interactions. 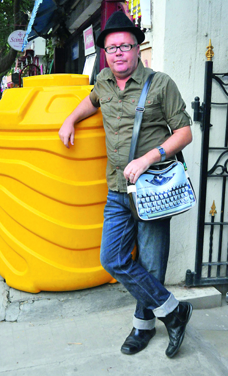 Debuting with his cult classic Once Upon A Time In Scandinavistan in 2006 and with thirteen novels since, Zac believes he was always headed this way. “Even before I knew how to write, I used to tell stories to my parents who had to write them down. Their handwriting was so poor that I had to learn to write it myself,” says the devoted RK Narayan fan who never fails to return to the great writer’s classic, The Guide, “I guess Hari Majestic is a little bit inspired by the main character in that book. Not too much, but a little.” His other sources of inspiration are sparked off by, “strange stories in the city newspapers,” says the author, who writes under the moniker Zac O’Yeah, but whose real name, probably only his wife, celebrated author Anjum Hasan knows.

“I used to be in a pop group, long ago in the 1980s, so the name stuck. It’s a take on that Beatles song, She loves you, yeah, yeah, yeah. Yeah, people ask but when I try to get them to pronounce my real name they soon lose interest,” he quips.

There have also been talks of adapting his book into a film. “Actually, the Hari Majestic novels are influenced a lot by Kannada cinema, which I love to watch — especially the movies by Real Star Upendra,” he says, now waiting for it to come full circle. Until then, it’s more book tours, pegs of Old Monk for him when he gets nervous and long walks around the sunset.