IND vs SA Second Test: Persistent rain has forced day's play to be called off

Murali Vijay was unbeaten on 28 while southpaw Shikhar Dhawan found form with 45 not out after being dismissed for a pair in Mohali. (Photo: PTI)

Bangalore: Bad weather washed out the entire day's play at the second Test between India and South Africa in Bangalore Sunday, with more rain forecast that could see the match end in a draw. The scheduled start was initially delayed by an hour as constant rain since early morning left the outfield too wet for play at the Chinnaswamy stadium.

A slight let up in the drizzle raised hopes the match might resume, but the covers were back on a few minutes before the umpires were due to walk out and play was finally called off at 2 pm (0830 GMT).

Here are the session timings for Day 3 of the 2nd Test match. Play will start at 9.15 am IST #IndvsSA pic.twitter.com/FZY7f5UKxZ

The forecast is more rain for the remaining three days with a cyclonic depression hovering over the Bay of Bengal. On the rain-free first day, South Africa were shot out for 214 after being sent in to bat in overcast conditions and India replied with 80 for no loss by stumps.

India lead the four-match series after securing a 108-run win in the first Test in Mohali last week. The third Test is to be played in Nagpur from November 25.

Bad news from M Chinnaswamy Stadium. Play for Day 2 has been called off. If weather permits, tomorrow the play will start at 9:15 #IndvsSA

Expecting a delay in the start of play. Umpires are out on the field for inspection. More updates in a bit. #IndvsSA https://t.co/jZcGEzkZaB

Play for day two has been called off due to persistent rain. Day three will start fifteen minutes early if weather permits.
The troublesome drizzle has still not stopeed and amidst a wet outfiled, lunch has been taken. Post lunch break, ground inspection will be done.

Still raining in Bangalore. The Lunch break will finish at 13:10. Inspection will be done then. #IndvsSA

The wait for start of play continues, still drizzling here in Bengaluru. Fresh visuals from the stadium #IndvsSA pic.twitter.com/gaOEZCxhAX

The drizzle has stopped but it will take a lot of time for the super soppers to dry the wet outfield.

The drizzle has all but stopped. The super soppers are at work. Fingers crossed. #IndvsSA pic.twitter.com/eRywioSzml

It looks like day two may lose an entire session as the skies look ominous. However the visitors are not taking the situation lightly.

The scene doesn't look good as the ground now is fully covered. No sign yet of play to resume.

When it rains, we don't stop playing. We just change our sport. #IndvsSA pic.twitter.com/vxCxct0Rpm

Just when play was about to start, the heavens have opened up and the covers are back on again. Gloomy faces around.

Conditions getting better in Bengaluru. Players are out on the field. #IndvsSA https://t.co/6xTBD5PgAw 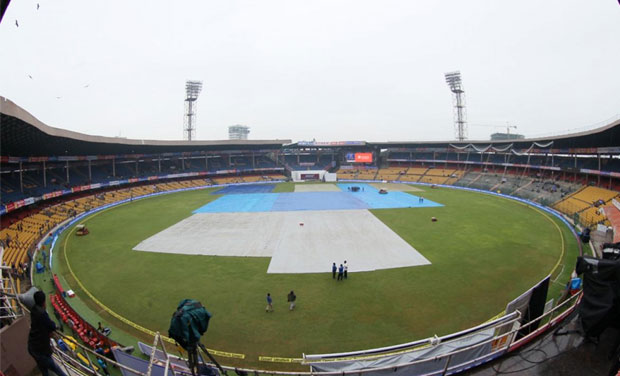 Light drizzle has delayed the start of play. 15 minutes of play is already lost and according to sources, 90 overs may not be played today. However, the drizzle has stopped and the sun is out.

It's all clear now, although the flood lights are on. Teams are warming up. Play to start at 10:30 #IndvsSA pic.twitter.com/Nq1qoIbEbn

■IND vs SA Second Test: Perfect day for hosts as Proteas on backfoot
■Watch: When AB de Villiers blurred the lines between 'supporters' and 'fans'
■‘My son may have been advised by his teammates for his new ponytail’
■When Jaddu is bowling, I try to share my experiences with him: Ravichandran Ashwin

Mitchell Marsh in, brother Shaun out of Australia central contracts