Manila: The Philippines put its military and police on full alert Saturday and pledged "higher security" for world leaders meeting at an economic summit in Manila next week after gunmen killed more than 120 people in Paris.

US President Barack Obama is set to join the leaders of China, Japan, Australia, Canada and 15 others at an annual Asia-Pacific Economic Conference summit in Manila on November 18-19.

"There is no credible threat registered at this time, but let us all be cooperative and vigilant," President Benigno Aquino said in a statement, also expressing solidarity with France after gunmen shouting "Allahu akbar" massacred scores of diners and concert-goers across Paris.

The Philippine military put all their forces on "full alert" Saturday, hours after a similar announcement by the national police.

"The alert status was also raised... as a matter of procedure following any international terrorist incident such as this morning's terrorist attack in Paris," military spokesman Colonel Restituto Padilla said in a statement.

"Philippine APEC security planners are now seriously looking into this recent incident to ensure our security preparations are appropriately upgraded." 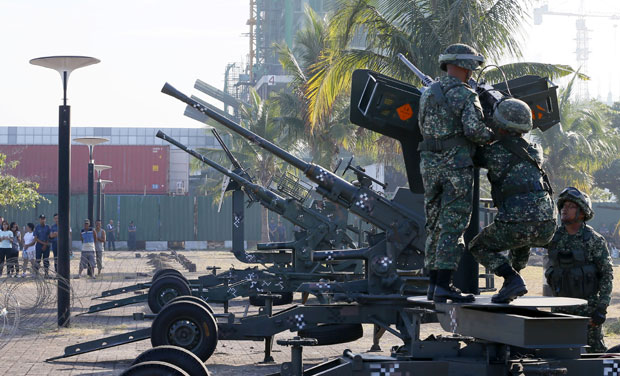 Filipino security forces conducted a mock terrorist attack and response at the APEC venue Saturday, with about a hundred special forces troops jumping out of a military helicopter and storming the building.

Other members of the security forces lay on the pavement outside the Philippine International Convention Centre, acting out the role of bloodied civilian casualties.

Philippine marines also deployed anti-aircraft guns and riot police around the summit venue as authorities conducted a full rehearsal of the visiting leaders' motorcades travelling between the summit venues and their hotels.

Asked about the implications of the Paris attacks on the APEC summit, Foreign Undersecretary Laura del Rosario, a member of the organising committee, told AFP by text: "Higher security."

National police spokesman Chief Superintendent Wilben Mayor said the authorities "have not monitored any specific or direct threat" to the country.

"Nonetheless, target-hardening measures on vital installations, particularly sea ports, airports and our rail systems have been further elevated to maximise deterrence against unforseen events," he said in a statement.

The Philippines has cancelled more than a thousand flights, deployed 18,000 police, and declared public holidays in Manila to ensure a safe and efficient summit, the organisers have said.

Major streets in the usually chaotic capital are being closed to traffic to speed up the shuttling of delegates, with police asking building owners to close their windows to prevent their use by snipers.

The Philippines has a long history of Islamic militancy in a southern region about 1,000 kilometres (600 miles) from Manila, although extremists have also carried out deadly attacks in the capital.

Al-Qaeda-linked Abu Sayyaf gunmen killed more than 100 people when they fire-bombed a ferry on Manila Bay in 2004, while the group regularly kidnaps foreign tourists and  bombs churches and shopping malls in the south.

Narendra Modi to participate in G-20 summit by video