Watch: When AB de Villiers blurred the lines between 'supporters' and 'fans'

When Abraham Benjamin de Villiers started his walk to the crease, around 20,000 fans were shouting 'ABD ABD' in chorus. (Photo: BCCI)

Bengaluru: This was not an Indian Premier League (IPL) game where he walked out to bat for the city franchisee but a batsman who would counter India, yet, when Abraham Benjamin de Villiers started his walk to the crease, around 20,000 fans were shouting 'ABD ABD' in chorus.

No wonder the parents seated in the VIP Stands were amazed at the scenes which certainly made them emotional. 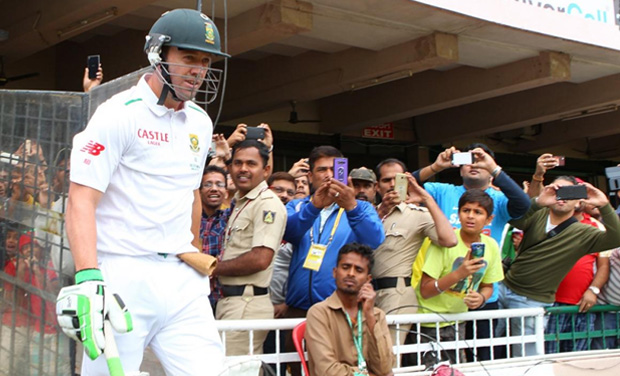 But then, ABD is a special player, who has crossed the barrier with his skill and goodwill to transform himself from a star cricketer into a loved cricketer as he walked in for his 100th Test match. (Photo: BCCI)

AB's little son was also geared up for his dad's 100th Test.

After Sachin Tendulkar stopped at 200 Test matches, the 100 Test barrier has lost a bit of novelty but when the atmosphere of an Indian stadium feels like Kingsmead in Durban or Newlands in Cape Town, it means the protagonist in question has won many more hearts than number of matches that he has won for his team.

Call it the IPL effect but not every overseas international player gets a standing ovation even for a minor landmark like half century nor there is sigh of despair when the same man gets out 15 short of a landmark, a century in 100th Test, which only eight cricketers have achieved in the history of longer format before him.

"I was surprised hearing the chants ABD, ABD. I thought they were moaning when AB got out. We all know that Bangalore is AB’s second home now that he has been playing IPL for Royal Challengers Bangalore for such a long time. I hope he now learns an Indian language," AB de Villiers Senior (well that’s his name), who along with his wife Millie dropped in at the media enclosure, said.

#ProteaFire family and friends at the ground, supporting the boys and AB. #AB100 #INDvSA pic.twitter.com/YVvsiaOhEX

Make no mistake; the Bangalore crowd went into raptures every time when Ashwin or Jadeja got a wicket. But the applause was equally warm and generous when De Villiers hit an off-drive off Ishant or rocked back to disdainfully square cut Jadeja.

He was playing for the team as he waged a lonely battle against the Indian spin duo just as his other teammates came and went.

Probably being teamman to the core is something that has been ingrained in AB since he was a youngster.

"He was very good at golf when he was young. When I saw his golf swing, I dreamt that my son would become Ernie Ells one day. He was a good tennis player too," De Villiers Sr said but then wife Millie joined the discussion.

"But we started realising that AB was not cut out for individual sport as he loved being around people and being in a team. And he is not as calm as he looks on the field," Mrs De Villiers let out a little secret about her son.

Someone asked about the father wanting his son to get a medical degree, he smiled and said, "We are a family of academicians and I would be happy if he gets a degree at some point of time. But I am absolutely happy with what he has achieved in his career."

So what is the father's favourite innings among the Test hundreds that the son has scored so far.

"Do you guys remember the 100 he scored against India off 78 balls (75) at the Centurion (2010). I loved that innings. He has five Test hundreds against Australia. There was one match at Newlands, where he hit Australian pacer Andrew McDonald for four sixes in an over. That was another innings I liked."

As the little interaction came to an end and the parents left the enclosure, one could relate to what Indian captain Virat Kohli said about his RCB teammate on the eve of the game.

"He is not only a great cricketer but a genuine human being too," Kohli said on Friday. 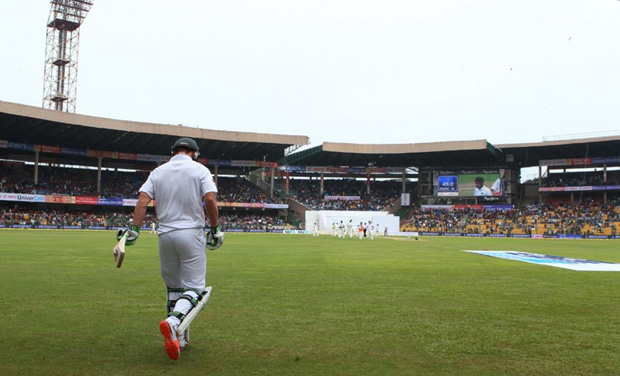 Perhaps the genuineness in AB has helped him built a bridge between him and the Indian fans as effortlessly as he hits those reverse flicks of tearaway quicks. There is a reason why Indian fans love their 'ABD'. (Photo: BCCI)

■IND vs SA Second Test: Perfect day for hosts as Proteas on backfoot