For Sophia Khan, a sentence that popped into her head at random on a leisurely walk became the starting point of her very first novel — about obsessive love, family ties and a desperate search for closure.

There is often a person, place or thing that a writer views as his or her muse — a life changing moment that makes them abandon everything except the steady flow of words that make up their vocation. For Sophia Khan, debut author of Yasmeen, it was a rather mystic sentence that popped into her head during one of her solitary walks eight years ago.

‘I know my mother is dead the day I find the box...’ and like the box itself, the 30-year-old knew it, then and there, that being a professor of English literature was not what she was meant to do. “It was 2008, I had just finished my undergraduate thesis from Haverford College in the US, and was in the habit of thinking in full sentences. I was walking down this lovely path that ran through a bit of forest when I thought of it. It was an accident, really. I didn’t make much of the sentence at the time, but I wrote it down — there is always a notebook in my bag where I write sentences that come to me out of nowhere — and over the next year, it began to evolve into a book. I never thought I would write a novel even though my father is an economist and writes prolifically, my mother writes short stories and my sister and I grew up listening to her lovely fairy tales,” says Sophia.

What followed soon after the startling revelation in the woods was an eight year-long journey that is now known as Yasmeen. Set in Crawford, a fictional town in New York, the story traces the journey of a desolate father and his heartbroken daughter as they try to move out of the shadow of Yasmeen, a wife and mother who went missing five years ago. One day, the daughter discovers a box full of intimate letters that reveal a different Yasmeen, one who was in love with a man named Ahmed. What follows is a shattering and uplifting tale of obsessive love, family ties and a desperate search for closure. 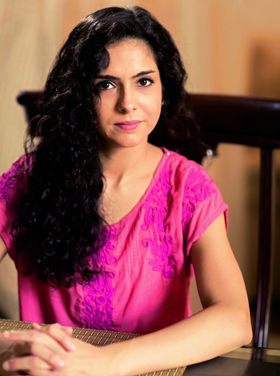 “The book is pure fiction. None of the characters or events are based on real life,” affirms Sophia, who moved to the US from Islamabad with her family when she was 17. “Moving to the US was a difficult phase, one where I was fairly isolated. However, challenges are what make one a better writer. Some of the minor details are drawn from my own experience, though. Scouring the used book stores on Sundays is very much something that I used to do. Like Irenie, the daughter, and her cousins, my friends and I were often to be found on the rooftops on summer nights. Like James, the father, I have been known to do terribly during important phone calls, saying none of the things I mean to say. As for the major plot points, however, those are all fiction,” says the author, who moved back to Islamabad in 2013 with her husband Raja Gul Mawaz-Khan, a lawyer. “My husband thinks my book is the best in the universe, he hasn’t read it yet, so I take his opinion with a grain of salt,” she adds with a laugh.

“I was on a long bus trip and a paragraph just popped up in my head. As a writer, I get distracted easily and unlike those who can sit down and write in coffee shops, I can’t,” she signs off.