If you thought microblogging couldn’t get any more, well, micro, think again. Instagram and Twitter may have taken the world by storm, but close on its heels is the image-sharing app Snapchat.
First mistaken as a “sexting” app, what makes Snapchat different is the fact that you click photos or “snaps” and share using the app, whether it’s for a chat with a friend or adding to your “story” — a 24-hour time-bound feed. They are visible for no longer than 10 seconds before they “self-destruct”. 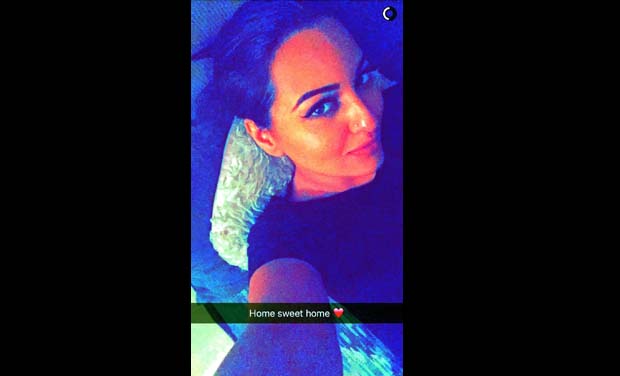 Sonakshi Sinha
And while its presence in the country is still growing, celebrities like Sonakshi Sinha (aslisonasnap on Snapchat), Sonam Kapoor (sonamakapoor) and Nikhil Chinapa (nikhilcx) have already mastered the art of “snapping”.
Nikhil says that it helps him keep his fans updated about his work. “I use Snapchat to allow people who follow me to get behind the scenes and into the skin of the work that I do,” the DJ says, “I use other platforms very differently — Facebook for posts or announcements and also for discussions about music, and Instagram for images of my life and travel.”
Celebrity blogger Malini Agarwal (MissMaliniSnaps), who was ushered onto the app by her colleagues, says that Snapchat’s appeal is that it doesn’t need curating. “You can put up a quick picture where you don’t have to worry about the composition, whereas on Instagram you have to make sure it looks visually great,” she says, adding, “There’s also less judgement; on Instagram you get a like or a comment or a vote... on Snapchat there’s no such requirement for validation, with no likes or comments.”
Malini Agarwal, Celebrity blogger
But the app’s popularity, most say, won’t really affect other social media. Hyderabad-based entrepreneur Ajay Manthena uses Snapchat to chat with friends and family, and update followers on his new business ventures. “But I still use Instagram more, because it’s a little more professional and mature,” he admits, “I think Snapchat is for people who are 22 and younger.” Nikhil adds, “Instagram won’t lag behind and nor will Twitter... Snapchat is a completely different platform and is used as such.”
To dos
“Don’t overthink it,” Malini advises new adopters, “It can be selfie videos or you can use your artistic power to draw and do fun things like that.”