Home is where the art is

If there is one artist who has put Andhra Pradesh on the world map, it’s Laxma Goud. Versatile, legendary and well-known in the country and world over, Laxma Goud’s artworks are sought after by private collectors globally.
But not many know about the artist, his early days of struggle, how he was shunned by the same college where he graduated from and how his family looks after his work that he produces at a staggering speed — the count for just the past three months being 60.
In his Jubilee Hills home, the 75-year-old dressed in shorts, T-shirt and his trademark photo-chromatic glasses talks about his journey, why lack of accolades don’t bother him and how Hyderabad’s weak demand for art is actually a blessing in disguise.
Home, where it all began
Born in Nizampur, Andhra Pradesh, Laxma Goud is the fourth son in a family of five siblings and the only one to have made art as a profession. The artist grew up surrounded by nature, an element that features in his work. “I belong to an agrarian household where my father was a great admirer of my work. He believed in education and insisted that I joined the Government College of Art and Architecture where I pursued diploma in drawing and painting. He was so happy when I received a stipend in the first year that he went back to the village and happily told everybody that he ‘doesn’t have to pay my fees any more’,” says Laxma, who admits he was his father’s favourite child.
“We had a pony that my father would let only me ride. On another occasion, we had a 10-day school field trip to Ajanta and Elora, costing `20; my father could only afford to send either me or my older brother and he chose me.” 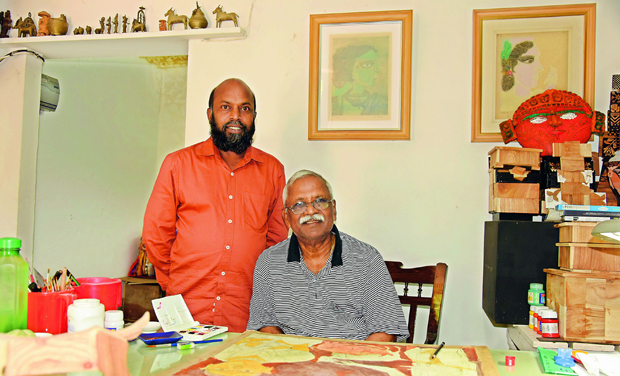