Some of the members from the PBEL CITY runner group

Fitness enthusiasts across various colonies in the city are now forming groups to find people with similar interest and bond over what they call ‘social exercise’. We talk to three such groups in the city

Welkin Runners
This group was formed only recently and the residents are now gearing up for the upcoming 10k run.

Talking about how the group started, Dayanand Shanmugam says, “When I shifted to Welkin Park, I thought let me inculcate fitness into the community. I have been speaking to people and encouraging them since the past two months.” The group runs at Sanjeeviah Park. “We have people from different walks of life, from 17 to 55-years of age. Around 22 of us train together,” adds Dayanand.

Dr Venugopal Pareek, another member adds, “When you are alone you sometimes might miss it, but when there is a group you have the motivation.

Serene County Runners
Formed by the residents of L&T Serene County, the idea of creating the group was to do some ‘social exercise’. “I’m a long distance runner and I always looked forward to making new friends. So creating the group was more like a social initiative. The group was formed in May 2014. We don’t pressurise people to run certain kilometres at a certain speed etc, the idea is to just run. We usually meet around 5:45 am and are back home by 6.30 am so even housewives find the schedule perfect and a lot of kids have joined in too,” says Seshadri Kothandaraman, and IT professional. 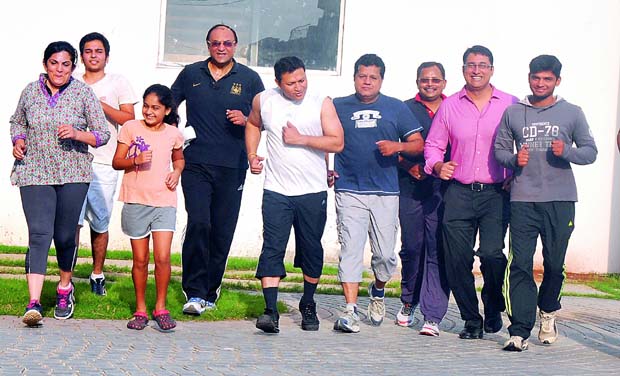 Rafika, Prakash Gulabani, Manisha, Sunil, Ravindra, Venugopal, Iqubal Sachin and Prajwal on a run together
Deepti Nagulapati, a programme manager, adds, “I was never an athlete. When I heard about the group I thought let me give it a shot and Seshadri convinced us that we can do it. He helped us with the training, told us what the problem was, the right posture and everything else that we must keep in mind. 30 of us who had never run before have now done half-marathons.”

PBEL City runner group
For them, it was not a conscious decision to start a group. And now they are so serious that the group even have their own T-shirts, a logo and a Facebook page. “Initially just 4 or 5 of them used to run together without much planning. Gradually, more people started to join, which also included women and children. The group was formed in December 2014 and we have members from 7-year-olds to 50-year-old. We train together for only three days a week. We also encourage cross-training where you could swim, cycle, play tennis etc. instead of running,” says Satish Raju, working professional.

“We have around 25 active runners, most of who were never into any physical activity a year ago,” he adds.

Shailendra Singh Bisht  says that the group has now gone beyond running and has become a family. “As a community, we have grown a lot. We have examples where  couples and even the entire family runs together. We run near Himayat Sagar as the view is beautiful. Who wouldn’t want to experience it every morning? Also, around 12 of us would be participating in the Bengaluru Marthon.”