Sao Paulo:  For almost his entire 47 years, Paulo Henrique Machado has been confined to a hospital ward in Sao Paulo yet the Brazilian isn't letting that get him down.

The toys, bright posters and adventure books around the hospital room, not the respirator tubes, tell Machado's story as he embarks on the pilot for what he hopes will become a popular children's TV show.

Machado's mother died at childbirth and shortly after he contracted polio, condemned from then on to stay at the Hospital de Clinicas in Brazil's biggest city.

Yet like the superheroes that he admired so much, Machado was able to defeat his apparently crushing problems.

"When I was a child I had to make the hospital my kindergarten. I played, I went into other rooms," he recalled. "At that time there was an epidemic of infantile paralysis in Sao Paulo. There were seven of us in the room and today only two of us remain."

Now his love of playing is being translated into the creation of an animated cartoon series called "Brincadeirantes," which is a combination of the words in Portuguese for "playing" and "person in a wheelchair."

Across from Machado's bed lies his great friend Eliana, the inspiration for the character of Leca in the pilot for the "Brincadeirantes" idea, which so far has got more than 62,500 visits on YouTube.

She's also an artist and the author of two books, using her mouth to hold the pen while she draws.

Machado still has some movement in his arms which allows him to create 3D drawings on his computer for the pilot episode, which was crowd financed to the tune of 120,000 reais (about $30,000).

The story follows seven children in wheelchairs who are determined to keep having fun.

"Brincadeirantes' is dedicated to children," he said. "We want to demonstrate that a boy in a wheelchair is no different. Quite the opposite -- he must play and explore his world to understand the difficulties lying ahead." 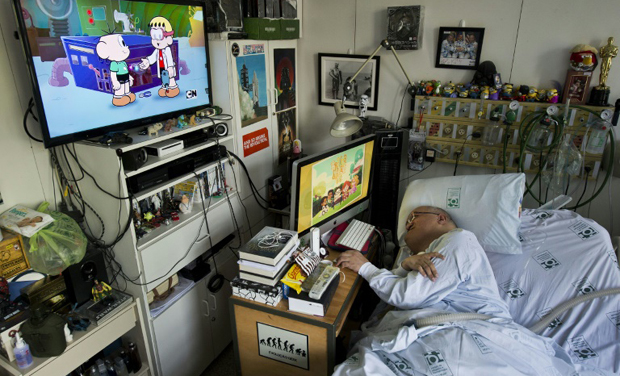 Based on real experiences, the pilot shows Leco Machado's animated self-portrait going to an amusement park for the first time.

"This really happened. It was when I was 10. Every time I got close to one of the attractions, the person in charge would give me a toy. But what I wanted wasn't a toy, it was to play," he recalled.

The story also pays homage to the five other children in the original ward who didn't make it.

"Suddenly your best friend is gone," he said, remembering his childhood friends' deaths. "I wanted to go with him because I couldn't see any other way forward. The pain is like a wound and yet then it starts to scar over and you are stronger."

The gift of a computer in the 1990s launched Machado on a new road. He has learned graphic design and joined a huge online community, including some 5,000 friends on Facebook.

"Technology is constantly changing. I love the film 'Avatar' because it's about someone who is paralyzed and is able to enter another body thanks to technology. Getting more freedom gives you courage." 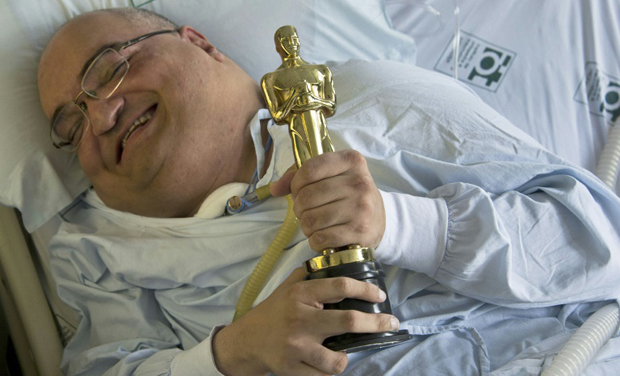 Paulo Henrique Machado poses with a replica of an Oscar statuette (Photo: AFP)

Movies have been an escape for Machado ever since he first went to a movie theater when he was 29 and watched Hollywood action blockbuster "Independence Day."

The pleasure and emotion he gained from watching films then prompted him to try his own hand. One which inspired him in particular was "The Sessions," which shows a polio victim "exploring his capacity to have an intimate life, to feel pleasure despite his condition."

"Our bodies cannot move but the rest is the same," Machado said.

There have been other motivators, including Formula One legend Ayrton Senna, who came to visit in hospital, as did Brazilian animated film director Carlos Saldanha. They've helped Machado think big, even in the tiny physical confines of his hospital world.

"Now my dream," Machado says, "is for 'Brincadeirantes' to become a television series and then to go on to the big screen."

"I haven't been to the Moon yet!" he answers, laughing.

Exposure to common cold virus may protect from COVID-19: Study