Bengaluru: From spending crores on a Canada machine to procuring a python, the BBMP did it all to improve the roads in the city. Despite aping foreign technology and sending engineers to learn the ‘technique’, the roads suffer from potholes. It’s not just BBMP’s shoddy works that are affecting the roads but the way the roads are repaired. Urban planning expert Vivek Menon says the treatment meted out to fix potholes has always been wrong, resulting in frequent formation of potholes.

Interestingly, he points out that the city has good foundation for roads and the BBMP is going wrong in treating the upper layers of the road. “When I worked with a team of experts on 10 roads as part of TenderSURE project, we realised that the sub-grade quality of Bengaluru’s roads are very good. The BBMP should cut open the potholes in a geometric shape maybe 2x2 feet, clean out the pothole, treat the upper layer, and add wet mix to the structural layer and then the bitumen content,” he says.

The BBMP’s fault lies in following this procedure, he observes. “Instead, what the BBMP does is fill mud, wet mix and asphalt altogether without cleaning the pothole. Eventually, when there is water infiltration or dust accumulated, the potholes are formed,” he says.

Further, Mr Menon said BBMP engineers were also filling debris into the potholes causing more damage. “The debris is neither a structural repair nor a granular base repair. When there are heavy rains, it will just fall apart. In simple words, when there is a wound, the doctor cleans it before applying medicines. Similarly, the potholes have to be cut open and treated for roads to be long lasting,” he says. Mr Menon also points out that the costs of repairing potholes could be reduced by 60 per cent if the BBMP repairs the potholes scientifically.

“The life cycle cost of permanently repaired pothole would be only 40 per cent of what the BBMP is spending now to frequently repair potholes. And if treated properly, the pothole would not be damaged for over five years,” he said. Mr Menon stresses that these are the standard international measures adopted even in foreign countries. 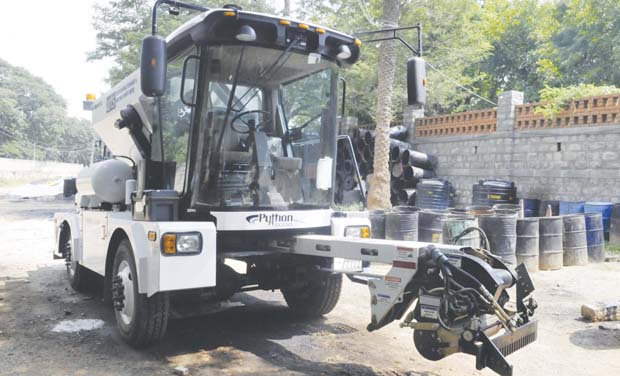 Meanwhile, the BBMP maintains that due to the fault of other agencies, the roads are being damaged, and it’s not the result of sub-standard works. “The BBMP is digging roads even in core areas and there are perennial leakages in BWSSB pipelines. It’s not true that the roads are damaged due to poor quality works or the nexus between contractors and engineers. Digging of roads is affecting us,” said K.T Nagaraj, superintendent of roads, BBMP.

The expert view:  It can be done, no dearth of solutions

While two python machines will be put to use to fill potholes near Central Silk Board Junction and Madiwala, the BBMP has requested for more machines. A BBMP engineer said that using a python machine was advantageous and reduced the cost of repairing potholes. “The python machine is highly efficient in filling potholes instantly. Though the investment is more, the later expenses are less. It has the capability of filling one pothole in less than 5 minutes. Hence, we have demanded for five more machines,” he said.

Hyderabad: No relief from nala stench

Andhra Pradesh govt to give land for house sites