LOS ANGELES - Long-standing barriers fell at Sunday's Emmy Awards as Viola Davis became the first non-white actress to claim top drama series acting honours, Jon Hamm finally won for "Mad Men," and "Game of Thrones" overcame voters' anti-fantasy resistance to snare the most trophies ever in a season.
An emotional Davis, who won for her portrayal of a ruthless lawyer in "How to Get Away With Murder," invoked the words and spirit of 19th-century African-American abolitionist Harriet Tubman. 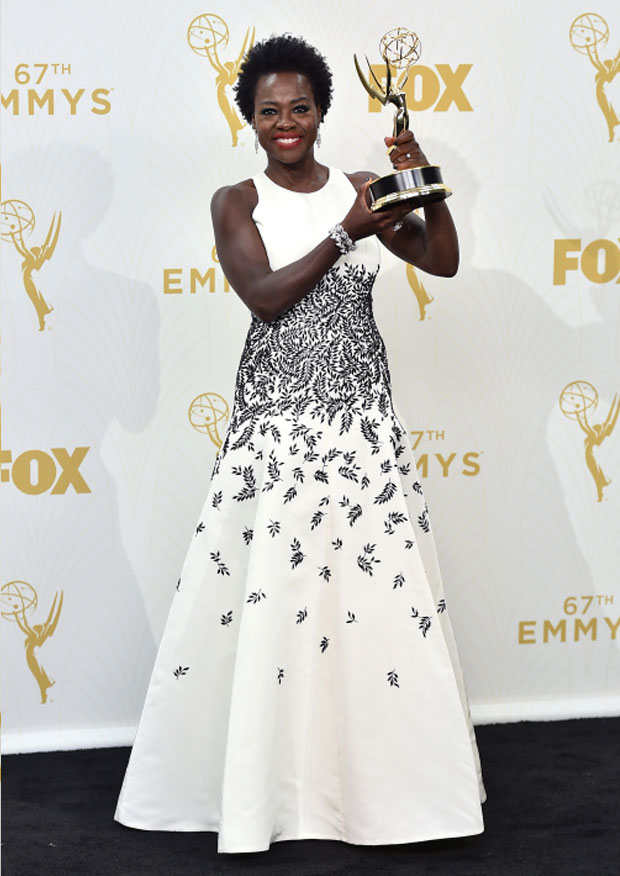 "I can't seem to get over that line," she quoted Tubman as saying.
"The only thing that separates women of color from anyone else is opportunity," Davis added. "You cannot win Emmys with roles that are simply not there."
"Empire" star Tariji P. Henson, another black nominee in the category, stood and applauded Davis' win. Other African-American actresses who prevailed Sunday were Uzo Aduba and Regina King, who won for supporting performances.
"Mad Men" star Hamm claimed the best drama actor Emmy that eluded him seven times before. He bypassed the steps to the stage, scrambling onto it on his stomach. 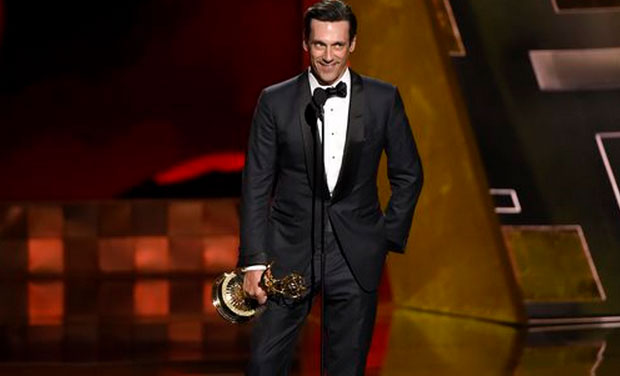 "There has been a terrible mistake, clearly," said Hamm, who played troubled ad man Don Draper in the series that ended its run without adding another best-drama trophy to its haul of four previous wins.
It lost to "Game of Thrones," which became only the second so-called "genre" series, after sci-fi drama "Lost," to win. The blood-soaked fantasy saga won a combined 12 Emmys on Sunday and at the previous creative arts awards, eclipsing the nine-awards record set by "The West Wing" in 2000.
With a total of 26 Emmys since it became eligible to compete in 2011, "Game of Thrones" is tied with "Hill Street Blues" and "The West Wing" as the most-honoured drama series ever. Sitcom "Frasier" remains the overall winner with 37 awards. 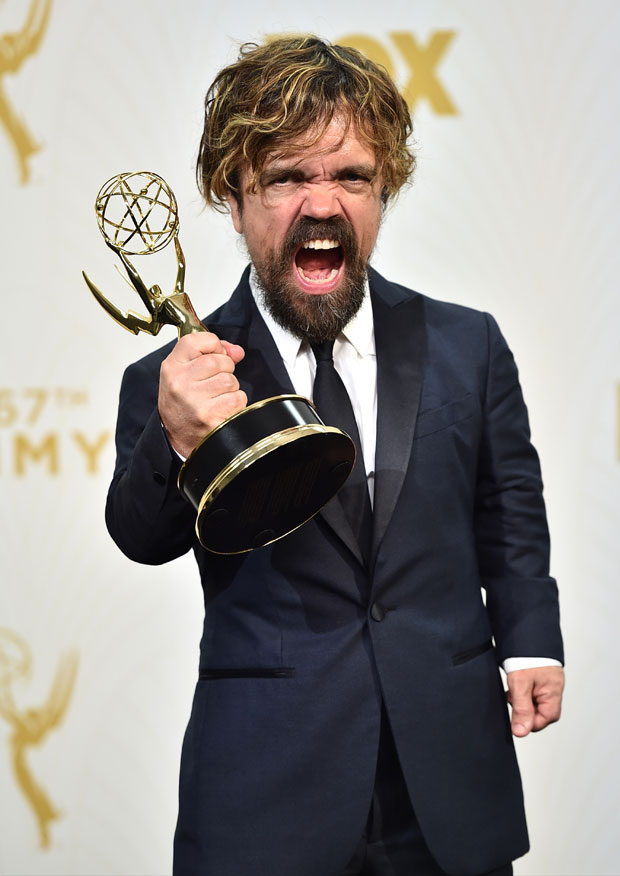 Peter Dinklage nabbed the best supporting drama actor award for "Game of Thrones," which also won writing and directing trophies. Tracy Morgan, the actor-comedian seriously injured last year in a car accident, made a triumphant return to reveal "Game of Thrones" the best drama series.
Host Andy Samberg noted that the 67th Emmys coincided with the 67th birthday for George R.R. Martin, whose novels are the basis for "Game of Thrones." A smiling Martin was in the theater audience to accept the congratulations, and was onstage for the big win.
The victory came despite criticism of the show last season for a rape scene. 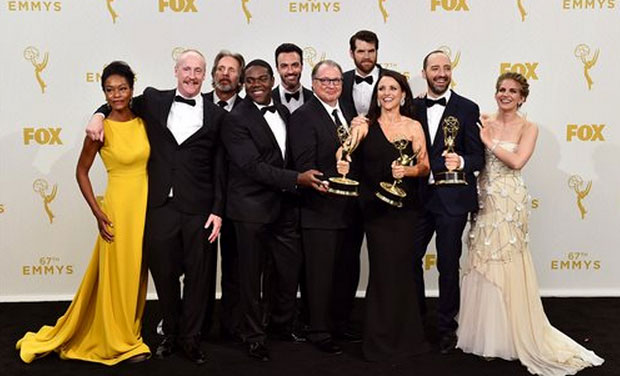 On the comedy side, political satire "Veep" claimed the top series award that had gone to "Modern Family" for five consecutive years.
Jon Stewart is gone from "The Daily Show" but not forgotten by Emmy voters, who gave the late-night show the best variety talk series award Sunday over two hosts who have moved on, Stephen Colbert and David Letterman. 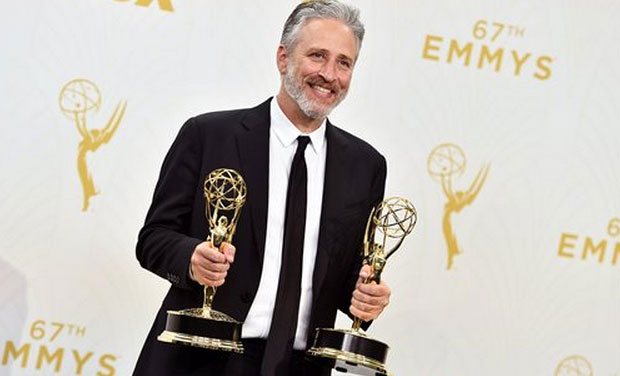 Stewart, who left the "Daily Show" earlier this year, warned the theater audience that the perils of leaving TV include no applause or free food.
"To everybody on television, I just want to tell you, cling to it as long as you can," joked Stewart, who's turning over "Daily Show" to Trevor Noah.
Besides Colbert, who left his Comedy Central show to become host of CBS' late-night show, the tough competition included another channel alum, John Oliver, for his HBO series. 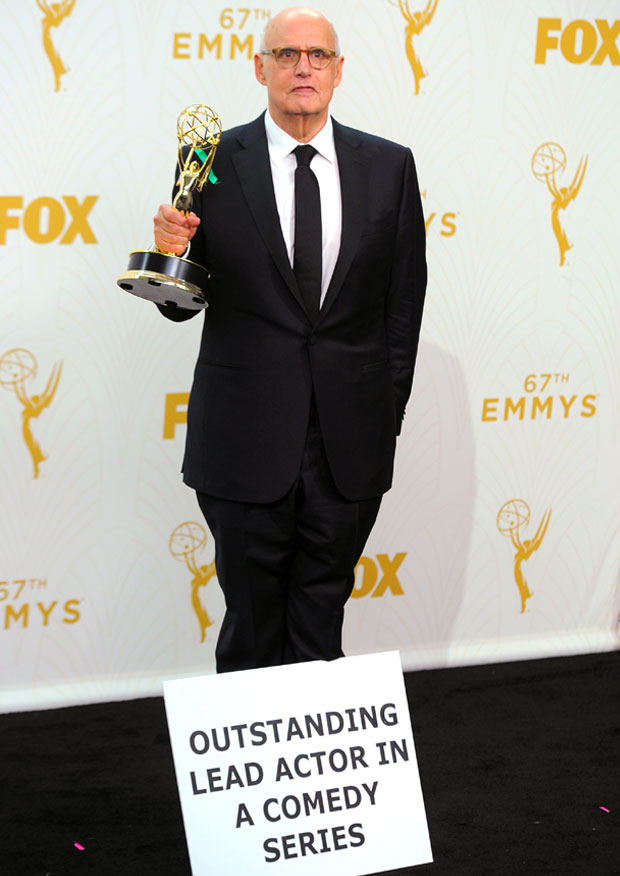 "Transparent" emerged as an early winner, capturing a best comedy actor trophy for Jeffrey Tambor and a directing award for its creator, and giving both winners a chance to pay tribute to the show's trangender themes.
"I'd like to dedicate my performance and this award to the transgender community. ... Thanks for letting us be part of the change," said Tambor, who plays a man journeying toward womanhood. 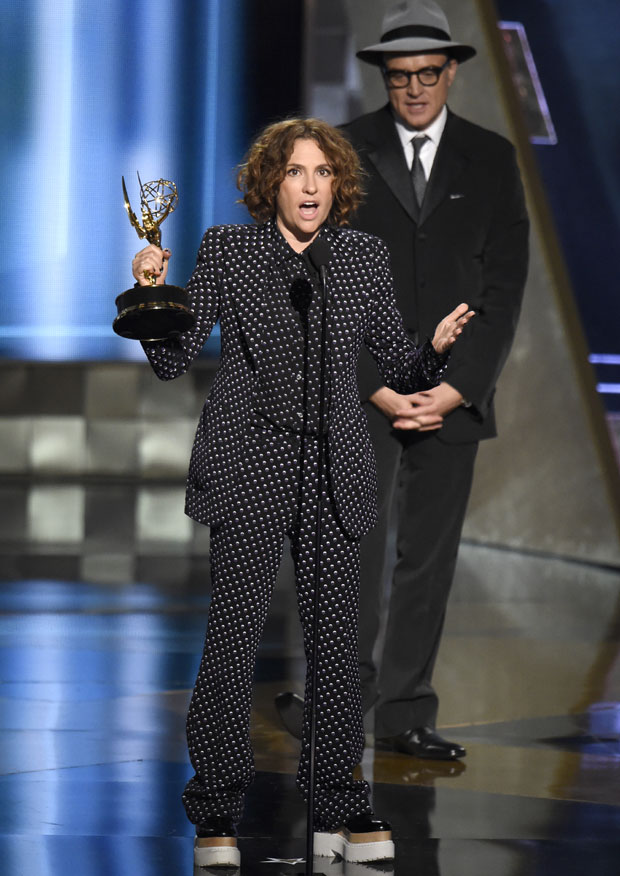 Jill Soloway, who based the series on the life of her own "moppa," as she calls her parent, used her directing trophy acceptance speech to ask for equal rights for transgender individuals.
"It is legal in the majority of U.S. states to refuse to rent to trans people," she said, saying the country has a civil rights problem that must be addressed. 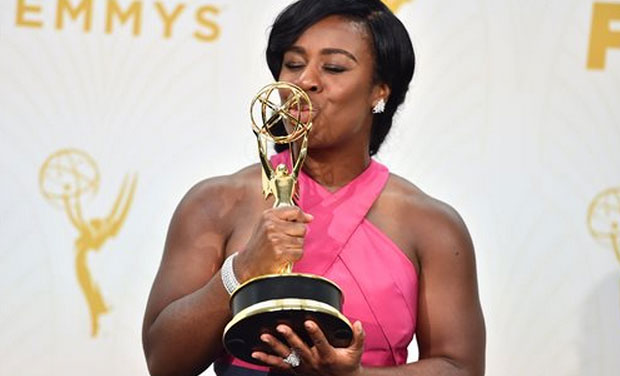 Aduba won the supporting actress in a drama trophy for "Orange is the New Black," which was switched under academy rules this year from comedy competition. She won a guest actress award last year for her portrayal of the series' character known as "Crazy Eyes."
Emmys voters didn't give up their fondness for choosing the familiar over the groundbreaking in other categories as well. 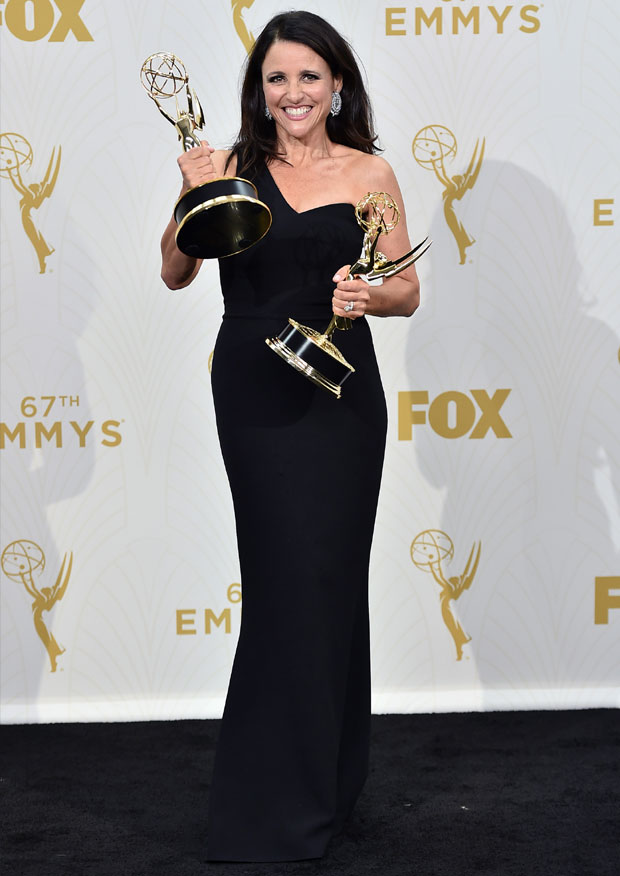 Julia Louis-Dreyfus was honoured as best lead comedy actress for "Veep" for the fourth time. Allison Janney of "Mom" and Tony Hale of "Veep" were repeat winners for supporting comedy acting honours.
Janney, who plays a dysfunctional parent, thanked series producer Chuck Lorre for creating a deeply flawed character and "thinking of me to play her."
"This is nuts," said Hale, thanking his show's writers and lauding his fellow nominees: "You make me laugh hard."
"Olive Kitteridge," based on the Pulitzer Prize-winning novel by Elizabeth Strout, nearly swept the limited series categories, with six trophies including the top award and lead acting honours for Frances McDormand and Richard Jenkins and a supporting award for Bill Murray.
King of "American Crime" won supporting actress honours for a limited series. "Inside Amy Schumer" won for best variety sketch series. 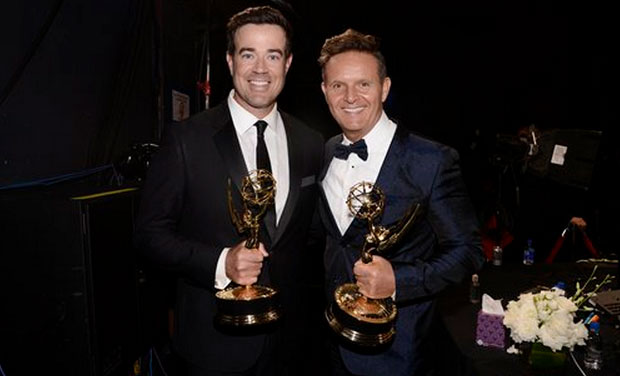 "The Voice" won a best reality series trophy, breaking the hold that "The Amazing Race" long had on the category and snaring an award that always eluded "American Idol."
Samberg kicked off the ceremony with a video in which he made elaborate fun of the overload of TV programs available.
"So many shows, so little time," he sang, before entering a "TV viewing bunker" to binge-view on all the nominated shows. A bearded, shaggy-haired Samberg emerged to boast to contenders Jon Hamm and Kerry Washington that he had them and everyone else covered.
Appearing on stage, groomed, Samberg touched briefly on the political scene.
"Sure, Donald Trump seems racist," he said. "What else?"
HBO dominated the Emmys with 43 awards, followed by NBC with 12, Comedy Central and FX Networks with eight awards each, ABC with six and Amazon with five.
...
Tags: hollywood, entertainment, emmy award, jon hamm, game of thrones