New York: Madeline Stuart is a beautiful, bubbly red head who at 18 is already a professional model with a handbag named after her.

What is remarkable is that she has Down's Syndrome.

Born and bred in Australia, she flew 28 hours across the world to take part in New York fashion week, where, today, she will tread the runway twice - in couture and resort wear.

She is not the first Down's model to walk in New York but her mother celebrates her inclusion as a sign that the stiff, intimidating world of fashion is slowly opening up to more diverse women.

"I think it's amazing that she's been given this opportunity. It's a fantastic platform for us to get our beliefs across on inclusion and disability."

The show is organized by fashion producers FTL MODA with the Christopher and Dana Reeve Foundation and Models of Diversity, a British group that campaigns for diversity in the fashion industry.

Stuart speaks for Madeline, saying it is difficult for strangers to understand her speech. Backstage, Madeline was revelling in the attention.

"She likes to be in the spotlight and she likes people to notice her and she thinks she's pretty cool," said Stuart.

Madeline's career took off when Stuart uploaded photographs of her in May to Facebook, where they quickly went viral.

Within a week, she had 20,000 followers. Today, her Facebook page has been liked by nearly half a million people.

A company called EverMaya has named a handbag after her and donates its sales to the National Down Syndrome society.

She has become the face of cosmetics company Glossigirl and FTL MODA contacted them a month ago, inviting them to New York fashion week.

The Stuarts head next to the West Coat, where Madeline will collect a prize as model of the year.

There are further plans to visit Sweden and even Russia, and she has been nominated for awards in Australia.

It's a far cry from the discrimination Rosanne recalls when Madeline was born, being abused in the park and the isolation of living with disability.

"I think people are a lot more open now," she said. "Social media has brought everything to the forefront. Things aren't hidden anymore."

If just one parent of a Down's child believes their kids can have a great life as a result of Madeline's example, she will feel happy, Stuart said. 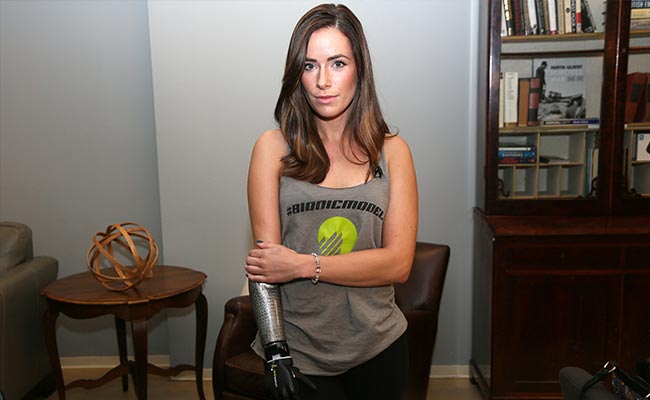 Another model walking in the show is Rebekah Marine, 28, a car saleswoman from New Jersey. Born without a right arm, she is proud to be called "bionic model."

"It gives what I'm doing more of an edge, so I think it's pretty cool. A lot of kids think I'm like a superhero now," she joked.

Marine is a stunning brunette - the epitome of health with sun-kissed skin and an incredible smile, but not the statuesque, rake-thin, racehorse-limbed model favoured by many in the high fashion world.

Despite her disability, she dreamed of being a model as a child, and went to auditions and photo shoots with her mother but was always turned away.

"I think the fashion industry has come a long way," she told AFP.

"I think a lot of brands are very hesitant to include models that aren't necessarily five nine, skinny, blue eyed, blonde.

"So it's a challenge but we're definitely making progress and it's so awesome to be a part of that."

Marine is a motivational speaker and a spokeswoman for her new i-limb - an incredible state-of-the-art prosthesis.

Its sensors allow her to manipulate its fingers and thumb, allowing her to do little things that others take for granted, such as holding a pot of yogurt or cutting meat using a knife and a fork.

"If I died tonight, I'd be like the happiest person in the world," Marine said.

"I think I've made an impact on people and that's all I could really ask for, is to just change people's lives."