Ross Cohen, left, and Blair Delson celebrate their wedding day at the edge of Dilworth Plaza in Philadelphia, as participants in the annual Philly Naked Bike Ride pass by. (AP)
Philadelphia: Here comes the bride all dressed in white. And, don't look now, but here come thousands of bicyclists not dressed in anything.
Nude and body-painted participants from this year's Philly Naked Bike Ride cruised through the wedding day photo shoot of lovebirds Ross Cohen and Blair Delson.
The couple, who got married Saturday evening, spent the afternoon before their wedding taking photos at romantic spots around the city. Their wedding photographer, JPG Photography studio owner Joseph Gidjunis, was snapping photos of them in Dilworth Plaza, next to City Hall, when they heard the buzz of about 3,000 bicycles approaching. 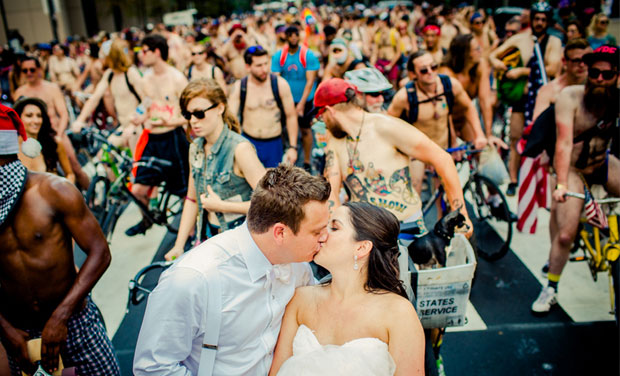 Delson and Cohen decided not to wait for the cyclists to pass before continuing with their photos. She grabbed handfuls of her tulle and lace dress and scurried toward the cyclists half a block away, and he followed.
"We saw them," Delson said Monday, "and I sprinted in my heels and my wedding gown and decided to get in on the action." 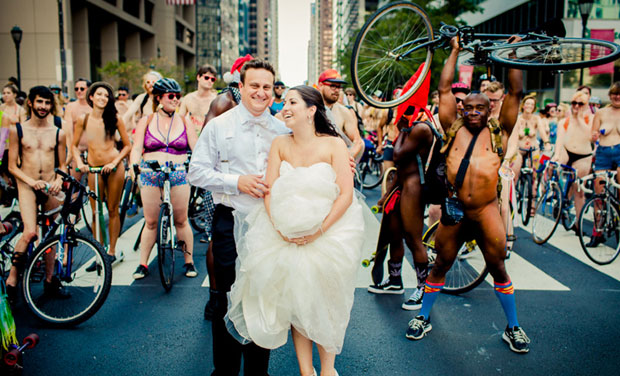 Cohen lifted Delson and twirled her around, and together they high-fived the nude cyclists, who serenaded them with cheers.
"We thought it was hilarious," Delson said.
Gidjunis, who used to take news photos and now primarily does events and portraits, took about 100 photos, many while bike riders were stopped at a red light. Cohen and Delson loved them.
"They captured the moment perfectly," Cohen said. 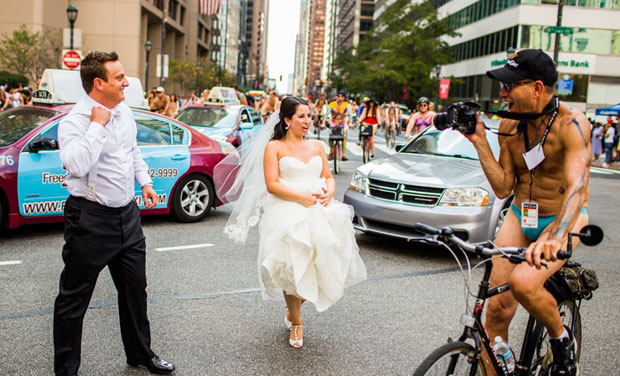 The cyclists, some nude and others in body paint or underwear, seemed to have a good time, too, smiling and flashing peace signs for the couple. Organizers of the annual bike event, which is related to the World Naked Bike Ride movement, say they hope it encourages people to bike more and to embrace nudity as a normal and enjoyable part of life.
Cohen and Delson, who are headed to Hawaii on Tuesday for their honeymoon, said they already know how they'll explain the R-rated wedding photos to their kids one day: "When it's your day," Cohen said, "just love life and embrace the moment."
...
Tags: photography, marraige, photobomb