Los Angeles: Popular television series "Game of Thrones" has found a place in the new Guinness World Records 2016 book for largest TV drama simulcast.
The fantasy-epic aired the largest simultaneous broadcast of a television drama when the second episode of season five was simulcast to 173 countries around the world, beginning at 2 am on April 20.
The show beat the previous record set by "CSI" just five weeks earlier by two countries.
Actress Maisie Williams, who plays Arya Stark, received the official certificate on behalf of the show. 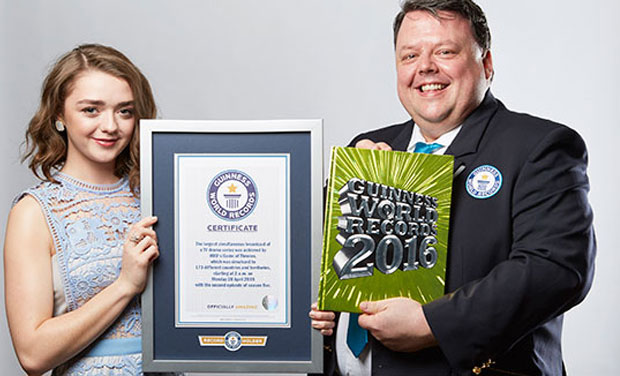 "I'm so pleased for 'Game of Thrones' to be a part of Guinness World Records, I'm going to tell my step brother as he gets the book every year for Christmas. I can't wait to see the look on his face!"
The show is an adaptation of George RR Martin's series of fantasy novels, "A Song of Ice and Fire", and premiered on HBO in the United States in 2011.
The 2016 edition of Guinness World Records will be released on September 10.
...
Tags: tv show, record, game of thrones