Ashwin has been a champion bowler for us: Virat Kohli

Colombo: Virat Kohli on Monday gave a thumbs up to spinner Ravichandran Ashwin’s aggressive style of bowling as the India captain savoured a crushing 278 run series-levelling victory over Sri Lanka.

Off-spinner Ashwin has picked 17 wickets in two matches and for second successive time in this series, India were able to achieve their target of taking 20 wickets.

"Ashwin has been a champion bowler for us. He's been taking wickets for us everywhere. Even on the Australia tour he was more aggressive with the ball. Even in his mindset, he's bowling in a more aggressive manner. It's almost impossible to get him away. He's bowling beautifully right now and I'm glad to see him with this kind of mindset, attacking the batsmen all the time," said Kohli. 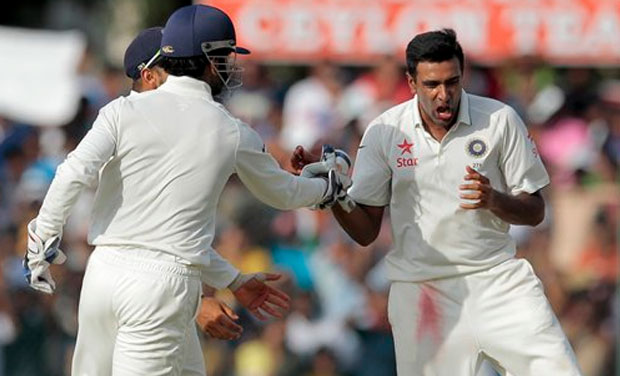 Indian skipper said that his first Test win as captain of a young team is very satisfying especially after the loss in Galle.

"It's pretty satisfying especially knowing we came pretty close twice before at Adelaide and Galle. I think the Galle defeat hurt us in the right way. It's a commendable effort by all the boys, to regroup so well after the loss like that knowing that we should have won the game. I think it's tremendous effort to get yourself together, put yourself in and play the same way again.

"To capitalise and improve on the same situation that we failed to in the first Test shows the guys are keen to improve and hungry to win. As a captain that is very satisfying," he said.

Kohli said nothing makes him happier than seeing that they were able to bowl out the rivals twice.

"I'm more pleased with the bowlers taking 20 wickets rather than guys getting hundreds. That’s usually been the case for a very long time to have someone getting the runs.

The session we had in the first innings where we literally squeezed them was one of the best bowling session I’ve been part of with this Indian cricket team.

"In the past two years, that was easily our best bowling effort as a group, especially in terms of partnerships. I’m really happy for them and in a game like today, we actually closed it off very convincingly. That actually gives them more confidence. Next time they go around, they will go with the belief they can take crucial wickets," he said.

Talking about whether bowling last on this wicket was a certified advantage, Kohli said, "Definitely. Last game in Galle why we got into the game early was we took five wickets in the first session."

"Because batting first and getting a decent total, obviously puts pressure on the opposition to equal that or get some sort of lead or you are always struggling to catch up in the game. We batted first and batted really well. Knowing the conditions in Sri Lanka, where the ball turns fourth and fifth days, you are always in the game if you are bowling last."

Despite India’s win, Rohit Sharma's demotion to number five and Ajinkya Rahane?s promotion to number three was a keen talking point, especially with the latter scoring his fourth Test hundred at his new batting spot.

"These are the guys who are going to play Test cricket for a long time for India. And guys can be shuffled up and down the order according to what the game demands. It?s not certain that a certain someone would bat at a certain position. You might see people floating around according to situations in the game.

"But I believe all these guys, 7-8 of us, are the ones who are going to play for a long time and they are getting confident. When you know that you can count on 6 or 7 batsmen that are playing for you, as a bowling unit also it gives you a lot of confidence," signed off Kohli.