This image released by the Royal Thai Police shows a detailed sketch of the main suspect in a bombing that killed a number of people at the Erawan shrine in downtown Bangkok. (Photo: AP)

Bangkok: Thai police said on Sunday that the perpetrators of bombing in Central Bangkok that killed 20 people may have alredy fled the country despite new surveillance video that may offer a possible clue to the bombing.

Surveillance video leaked to Thai media shows a man in a blue shirt placing a bag on a riverside walkway, then kicking it into the water on Monday night shortly after the explosion several kilometers (miles) away at the downtown Erawan shrine. About 18 hours later, at 1pm Tuesday, an explosion took place at the same spot near a busy pier, causing no casualties.

Col. Winthai Suvaree, a spokesman for Thailand's ruling junta, also said that closed circuit television showing the main bombing suspect was used to trace the route he took to and from the site of Monday evening's rush-hour attack. He said that a police sketch of the suspect had been distributed to border posts.

Read: Bangkok blast: It’s ‘much clearer who the bombers are’, says Thai officials

Police spokesman Prawut Thawornsiri said he believes the perpetrator would have timed an escape carefully and "wouldn't have much time to stay around." 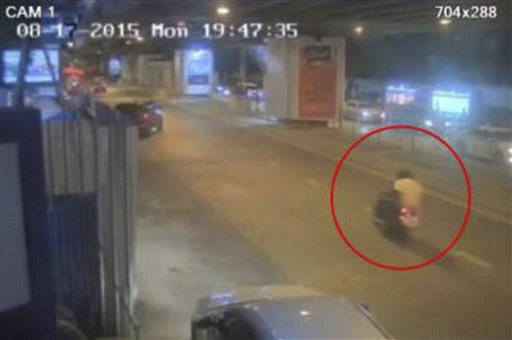 This annotated image, released by Royal Thai Police spokesman Lt. Gen. Prawut Thavornsiri shows a man wearing a yellow T-shirt riding on the back of a motorcycle near the Erawan Shrine in Bangkok, Thailand.  Prawut said he believes a man in a yellow T-shirt caused the blast that killed a number of people at a shrine in downtown Bangkok. (Photo: AP)

"I suspect that he may have left, but we will keep searching, in case we can find others who may be in the country or find clues, evidence and witnesses who may have seen him," he told Channel 3 TV network.

Police have offered a reward that on Friday was raised to 3 million baht ($85,000). On a police arrest warrant, the suspect is described as a "foreign man," although a military spokesman said a connection to international terrorism seemed unlikely.

Thailand's police chief Somyot Poompanmoung said investigators would need some luck to catch those behind the attack.

"I have to say we need some luck. If the police have good fortune we might be able to make an arrest but ... if the perpetrator has good fortune maybe they can get away," he told reporters Sunday  after a ceremonial show of security strength meant in part to reassure the public over safety.

So far the operation to find who carried out the attack appears to have made little headway with apparently contradictory statements coming from the military-backed government and the police.

Theories abound as to who was responsible for the attack.

They include ethnic Uighurs (pronounced WEE-gurs) angry that Thailand repatriated to China more than 100 of their countrymen who had fled from there; Islamic separatists who have been carrying out an insurgency in southern Thailand for a decade; frustrated supporters of former Prime Minister Thaksin Shinawatra angry at the military government that opposes his return to politics; and rival factions within the army contending for power.