Higginbothams in 1960s and now
Finding traces of Madras in today’s Chennai is definitely a bit of a tough task. Urbanisation has often been blamed for a city losing its quintessential ‘desiness’. Bringing together the best of both worlds in a single frame, a Chennaiite stitched together photographs of old Madras and the new Chennai, giving people from the city a way to go back in time. 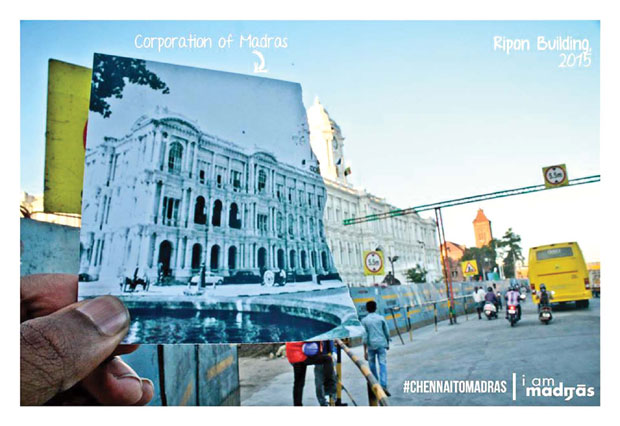 Raunaq Mangottil, a 25-year-old entrepreneur, who also handles Facebook pages like ‘I am Madras’, modelled to be the Chennai version of ‘Humans of New York’ from the city. He created a series of 10 photographs titled “Chennai to Madras” marking Madras Day, to establish his love for the city. Starting off on how he initiated the idea, Raunaq said, “About a week ago, I was at Egmore for some work and got stuck in a traffic jam. The old SBI building, Burma Bazaar and the other heritage buildings caught my attention. When I was thinking about how the city has changed from my childhood days, it struck me that bringing these two together would be a good idea. My inspiration for this was a French photographer who also did a similar series for Paris during the World War II and the present day.” 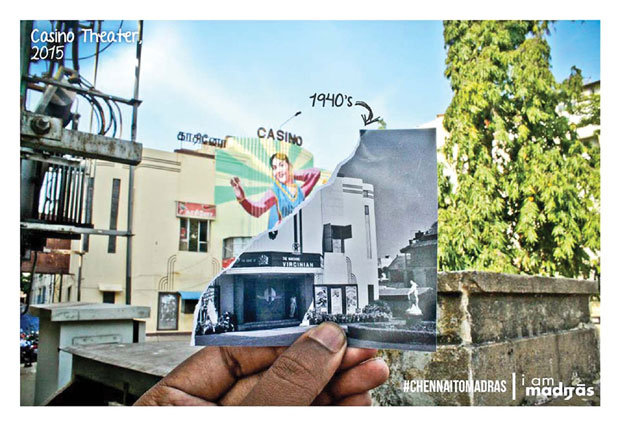 Raunaq looked up old photographs of Madras from the Internet and then tried to match them with the exact locations now. It took him two days to compose all the shots and match them with the exact year. “There was so much traffic that it was extremely difficult to take that perfect shot. But my friend Karthik and I managed to pull 10 great time travel shots. We could not manage the aerial shots though,” he said. He further added, “I wanted to create something timeless that moves people. After seeing the project, many people messaged me about how their late ancestors used to narrate tales about Madras and that this project brought back a lot of memories and happy tears.” 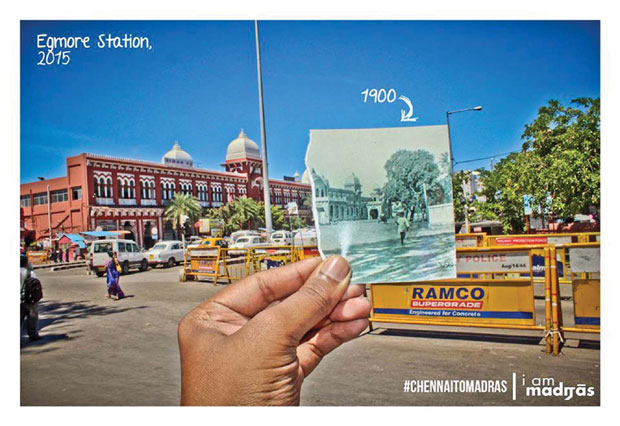 Sharing more anecdotes from his childhood days, he shared, “Fountainhead stationary shop, which was opposite Ethiraj College, was one of my favourite. But, sadly the shop does not exist anymore. Anna Nagar did not have a Shanthi colony and was just purely a residential place. But, now it has changed with several fancy restaurants all over. Similar examples would be Hotel Dasaprakash, the old Al Buhari, Spencer Plaza and Besant Nagar beach. Cozee was the only restaurant on the beach road. Now, it’s crowded all the time.”
...
Tags: offbeat, lifestyle, chennai