Business, In Other News

To celebrate her 50 years into mainstream journalism, a felicitation ceremony was held at the Mumbai Press Club on August 12, 2015

Olga has covered every beat and was also the sole woman torch-bearer in the 60s to cover politics, forcing bosses to value merit over gender.

Modest, oh to the core, Olga has always shied away from publicity and public adulation of her work. That is perhaps why she almost threatened to not turn up at her own felicitation this week by the Mumbai Press Club.

There would be too much to write if we attempted a biography here. But what better way to know about a person if not from a close, devoted friend?

“Olga will probably stop talking to me when this column appears. That may end our 45-year-old friendship rather abruptly! But I am happy taking the risk - because Olga's many unsung achievements are worth documenting. On Wednesday afternoon, Olga Tellis nearly didn't show up for her own "Felicitation", organised by Gurbir Singh, and her fourth estate admirers at Mumbai's historic Press Club, right across from the offices of the Old Lady of Boribunder. Singh had unwittingly done the unthinkable when he posted about Olga having turned 75 on the 4th of August this year. By his rough calculation, that made it 50 years of Olga as an active journalist. By any standards, it is a colossal milestone, and definitely one worth celebrating. But, unsurprisingly, Olga herself was aghast when she was alerted about the post by friends and promptly declined the honour. Said she to Gurbir, ".... it is unthinkable. I don't accept felicitations. I love my work. To be felicitated for that is demeaning the beauty of work...please, make it a meet for senior journalists - not a felicitation - or else, I won't turn up!"

Nobody messes with Ms Tellis! Not even Gurbir Singh, Chairman of the Press Club - the invitation was hastily reworded. As Gurbir Singh put it disarmingly, "Let's call this a farce of a panel discussion - we are all here for Olga Tellis." 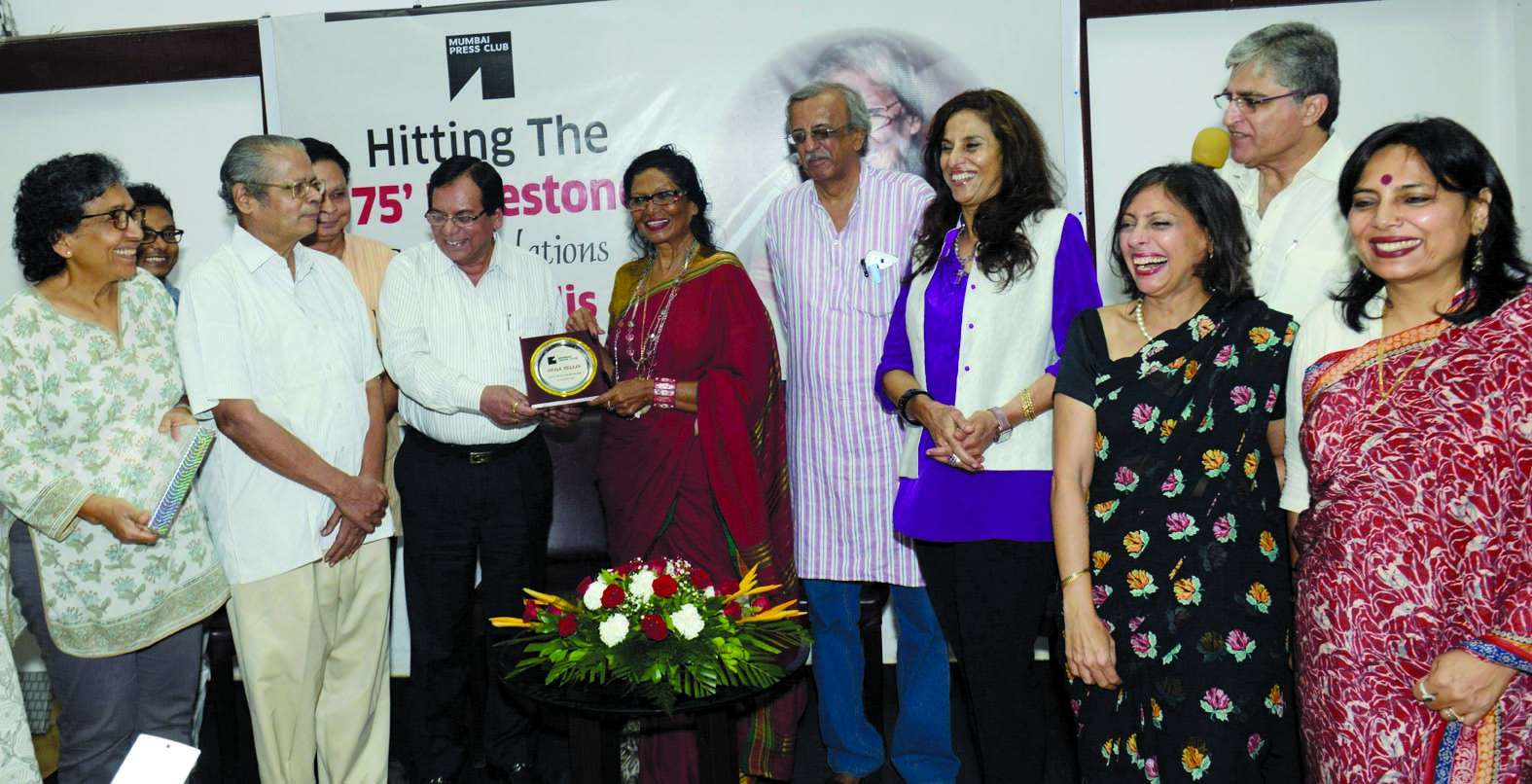 And there she was! Red nails, red lipstick, red Maharashtrian "lugde" worn with a gold coloured "Khaan" choli. A far cry from the Olga Tellis who used to stride into the ultraconservative Mantralaya 40 years ago for regular press briefings wearing 4-inch killer stilettos, miniskirts, sensuous jersey blouses...and loads of attitude! This, at a time when she was possibly the only woman on the political/business beat. And that's the time I first met her - was she jaw-droppingly gorgeous! She worked crazy hours then and she works crazy hours now, rarely leaving her desk before 10 pm.

Nothing but nothing matters to Olga as much as her beloved work. Her life is about the next story. The next deadline. The next exclusive. The rest can go to hell. Me included! It is an admirable trait for someone in her unique position. She craves nothing. And shuns personal glory. She has consistently refused awards and recognitions, saying her work is reward enough. So single-minded is she that if you ask her about movies, music, entertainment - you will draw a blank. Her Spartan existence is reflected in the way she lives - a simple roof over her head in the middle of a vegetable market. Strictly no frills - not even a geyser! She seems to subsist on thin air, while concentrating all her energies on gathering political and financial information/knowledge.

Olga and I have many unusual connections - spotting rainbows is one of them. Wherever I am in the world, the minute I spot a beautiful rainbow arching across the sky, I send Olga a message. She does the same. We love sunsets and skies. Plants and flowers. Her tiny balcony is a mini forest with wild shrubs and vivid hibiscus. A weaver bird visits once a year and methodically builds a nest. The huge rubber tree has long outgrown its planter. These are Olga's real friends! These are the "people" she goes home to, and wakes up with. Because her heart was given 53 years ago to a very demanding partner - journalism.

When I had asked Zia Modi to write a book for my imprint, identifying 10 judgements that changed India, she had picked as one of those ten, a Supreme Court verdict delivered on a case filed by Olga Tellis, upholding the rights of slum dwellers. This was way back in 1980. It was a significant judgement that provided legitimacy, dignity and shelter to thousands by recognising their fundamental right to life. When I mentioned this to Olga, she was happy - not for herself, but for the slum dwellers she had fought so strenuously for. In an era where any and every semi-literate pen-pusher actively lobbies for national awards ("at least a Padma Shri..." they bleat), here is one individual who has spent the better part of her life doing what she believes in - sans compromise!

The best compliment I can pay my friend Olga is that she remains the quintessential reporter's reporter - generously sharing her contacts and information with younger colleagues, taking copious notes at boring press conferences, paying attention to routine RBI briefings on fiscal policy, keeping a hawk's eye on corporate "jigri pokri", asking tough questions to hard boiled politicians, and hammering out copy late into the night, her long, carefully varnished nails tapping the keys somewhat noisily...and her attention remaining unwaveringly on the edit she has to file, an impossible deadline she has to meet.

China virus fears cut chicken sales in India by half

Coal imports rise in November after three months of decline