Picture of one of the purported terrorists nabbed by security forces in Udhampur (Photo: Twitter)

Jammu: A suspected Pakistani terrorist was caught alive after militants on Wednesday attacked a BSF convoy on Jammu-Srinagar national highway in Udhampur killing two men of the border guarding force and injuring 11 personnel while the other terrorist involved in the strike was shot dead in retaliatory fire.

Inspector General of Jamu Danish Rana told television journalists that the terrorist Mohd Naved was from Faislabad in Pakistan.

Forces said Naved and another terrorist attacked a BSF convoy on the highway near Samrauli, 10 kilometres from the Udhampur town.

Two soldiers and one terrorist were killed in the firing. 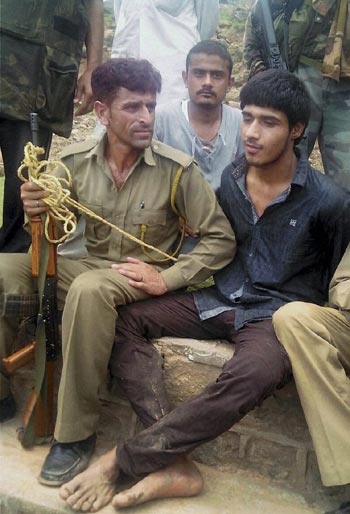 Soon after, Naved shepherded three locals into a forested area and tried to reach a village. There are reports he ran into a school on the way which was thankfully shut due to planned protests.

But after nearly four hours, Naved who was armed with an AK 47 was overpowered by his hostages. It is learnt he was trying at that moment to fire at police officers on his heels.

The villagers told television channels that Naved pleaded with them to let him go after they managed to pin him down. “Let me go,” he told them but they held on to him till police arrived.

Naved looks in his early 20s. He was taken into custody by the police and is being interrogated. Police are curious to know how he managed to cross over into Indian soil.

Rana said Naved will be questioned in a safe house. “We will ask him about his route, his targets etc,” Rana told NDTV.

The terror strike, which comes days after ultras attacked Dinanagar Police Station in Punjab, was the first in Udhampur district after over a decade.

A senior police officer said that there was firing on a BSF convoy on the highway near Samroli by militants early this morning. Two BSF jawans were killed and around eight personnel injured, the officer said. 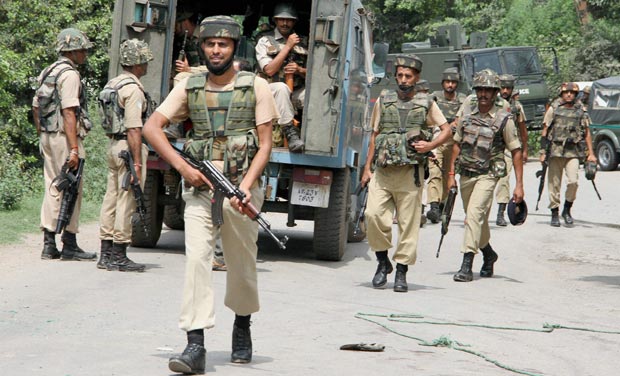 Giving details, he said that militants hurled grenades and opened indiscriminate fire on the convoy when it reached Nassu belt on its way from Jammu to Srinagar. BSF jawans retaliated, leaving one militant killed.

IG Jammu, Danish Rana said that two BSF jawans and a militant were killed. Army and police have rushed to the spot and the entire area has been cordoned off, he said.

The injured have been taken to a hospital, he said, adding massive combing operations have been launched in and around areas.

Vehicular movement on the highway has been stopped due to the incident. The convoy carrying Amarnath pilgrims had already crossed the highway when the militants attacked the BSF vehicle.

Officials said Pathak is rushing to Udhampur, leaving midway the five-day DG level talks with their eastern counterparts Border Guard Bangladesh (BGB) who are presently here for the annual bilateral meeting between the two sides.

"The DG will review the situation in Jammu and adjoining areas in the wake of the early morning attack on the BSF convoy in Udhampur.

Pix of BSF bus vehicle which was attacked by terrorists this morning in Samroli(visuals deferred by unspecified time) pic.twitter.com/TIiDURv99w

He will also review the security arrangements for the Amarnath yatra being secured by the force and other paramilitary and police units, they said.

Pathak is expected to be back by late evening as the joint record of discussions with the visiting Bangladeshi delegation is scheduled to be signed tomorrow between the two DGs.

DG Pathak would also be forced to miss a special handball match being scheduled between the troops of the BSF and BGB. "The DG has humbly conveyed the decision and emergency of his visit to Jammu to his Bangladeshi counterpart," they said.

One terrorist has been killed, Home Minister Rajnath Singh said in Delhi, adding that there was no link between the attack and Amarnath pilgrims passing the area. He offered condolences to the families of the jawans identified as constables Rocky and Shubhendu Roy who died in the attack even as he spoke to BSF Chief D K Pathak about the incident.

Reacting to the attack, Union Minister Mukhtar Abbas Naqvi said, "Those behind such attacks very well know that their terror designs won't be running for long in India. That is why they are doing all such kinds of activities."

The government and the security forces were doing their best to tackle such evil designs and "without a doubt the country's respect, honour and the people's security is the government's topmost priority," he said in Delhi.

Congratulating the security forces for killing one militant and nabbing the second terrorist alive, senior Congress leader Ghulam Nabi Azad said, "Catching a terrorist alive is a huge achievement. Due to this, in the coming time we will get to know about the future attacks which Pakistan has planned.”

"Earlier, it was when (Ajmal) Kasab was captured and yesterday their own officer had told where he was trained, how they (terrorists) went in the boat and how they changed the paint of the boat. I even congratulate the officer who exposed Pakistan completely," he said.

BSF officials at the forces' headquarters in Delhi said constable Rocky, who was killed in the encounter, displayed exemplary courage and shot dead the militant who had attacked the convoy.

While he hailed from Haryana, Roy, the other BSF constable killed, was from West Bengal. A convoy carrying Amarnath pilgrims had already crossed the area on the highway when the militants attacked the BSF convoy.

Giving details about the incident, Chaudhary, DC, Udhampur, said no student was present in the school from where the terrorist was nabbed as a call for a strike over the demand for setting up an AIIMS in the region had been given.

Former J and K Chief Minister Farooq Abdullah said Pakistan is definitely involved in the terror attacks. "They (the Indian leadership) must give a strong warning to our neighbours that we cannot tolerate this any longer, and this is enough. On the one hand we talk about dialogue and on the other hand terror activities continue.

"Till when will this go on? Do we just have to die, as the dialogue is not reaching any conclusion. I would like to tell the Indian government that they must convey with immediacy to our neighbours that enough is enough, we do want peace with you, but we will not tolerate terrorism any longer. They must appeal to the neighbouring government (and say) otherwise be prepared to face consequences," he said.

He said when the Prime Minister Narendra Modi had a dialogue with his Pakistani counterpart in Russia, "we felt that their dialogue was progressing, and we thought that matters were going to be resolved."

NC leader and ex-J and K CM Omar Abdullah said Kashmir's condition was already in a bad shape, and now this new militancy has started. "Educated youth are getting drawn towards militancy. Today, you saw an attack in Jammu, that too in an area from where we had wiped militancy clean. This is another evidence of the incapability and failure of this government. Militancy is not shifting, it is merely resurging in areas from where we had managed to clear it," Omar said.