Police with a Pakistani terrorist after an attack on BSF convoy at Jammu-Srinagar national highway at Udhampur district of Jammu and Kashmir. (Photo: PTI)

Udhampur: "Its fun doing this," said Mohd Naved, a suspected Lashker-e-Taiba militant from Pakistan, who was caught alive after the attack on a BSF convoy here on Wednesday that killed two constables.

Mohd Naved, who says he hails from Faislabad in Pakistan, claimed before the media that he entered the Jammu region 12 days ago along with a fellow terrorist identified as Momin Khan. Khan was killed in retaliatory fire by the BSF today.

This is the first suspected Pakistani terrorist to be captured alive after Ajmal Kasab, who was nabbed during the dreaded terror attack in Mumbai in 2008.

"I came to kill Hindus," said Naved, dressed in a dark blue shirt and brown trousers, with a relaxed demeanour. He also alleged that Kashmiris were being killed all the time.

He told officers he entered Kupwara district in the Kashmir valley a month ago but retreated as he could not make any headway.

A resident of Ghulam Mustafabad (Faislabad) in Pakistan, Naved, believed to be in early 20s, has two brothers and one sister. One of them is a lecturer while the other runs a hosiery business.

"It has been 12 days since I came here. We walked all days in the jungle," he said as villagers clicked pictures with the prize catch.

"I am from Pakistan and my partner was killed in the firing but I escaped. Had I been killed, it would have been Allah's doing. There is fun in doing this," Naved said. 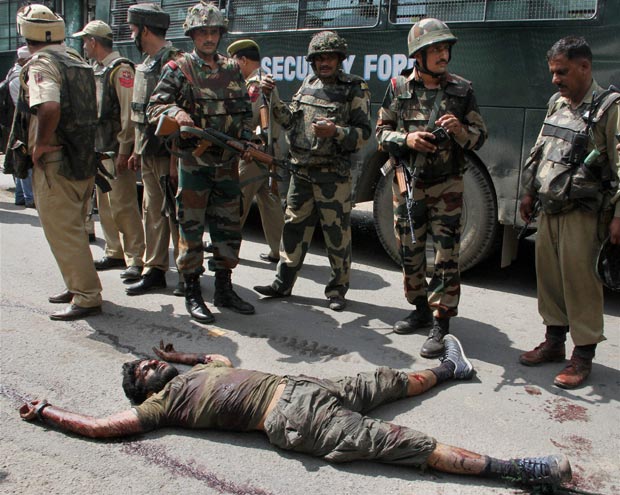 Security persons stand near the dead body of a terrorist who had attacked a BSF convoy on Wednesday. (Photo: AP)

During questioning at a joint interrogation centre in Jammu region, he said he had initially made an attempt to enter the Kashmir Valley a month ago but had to return as their guide did not turn up to receive them, official sources said.

Naved identified the fellow terrorist killed today in the retaliatory fire by BSF as Noman alias Momin, who was from Bhawalpur in Pakistan.

The duo carried out an attack on a BSF convoy at Simroli near Udhampur killing two constables. In the gun fight, Noman was killed while he managed to escape before being nabbed by the Village Defence Committee members, they said.

Initially, he said that he was in his early 20s but later claimed that he was only 16. He has been changing his statements. First he identified himself as Kasim and later as Usman, and then as Naved.

This has been the modus operandi of banned Lashkar group sending youngsters to Jammu and Kashmir with the direction that in case they were caught, they should claim to be below 18 years so that they are tried as juveniles.

Watch: PM Modi's video message to the nation, his third address on coronavirus

Allow movement of goods between states without curbs: Kerala to PM

Watch: PM Modi's video message to the nation, his third address on coronavirus