Mumbai: Akshay Kumar and director Prabhu Deva along with producer Ashvini Yardi are currently in Cape Town, where they are shooting for Akshay’s film ‘Singh is Bliing’. The team was previously in Romania, where they shot for a few days.

The film is also being shot in Goa, and Patiala. While in Romania, the team reportedly shot the film in Bran Castle, commonly known as "Dracula's Castle" as it is believed that the blood thirsty Count once resided there. 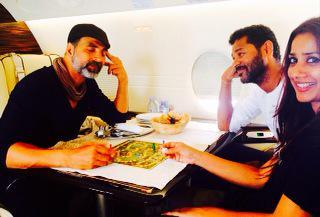 The movie will have an interesting mix of action, comedy and adventure. The Singh Is Bling cast includes actors Amy Jackson and Lara Dutta in leading roles, while other actors include Vivek Oberoi, Bipasha Basu, Yo Yo Honey Singh, and Arfi Lamba.

Jacqueline Fernandez could land in trouble