Bengaluru: ‘Witch-hunt,’ ‘vendetta’ - these are the words being used to describe the state government's action against Bangalore Club, which has, over the last 150 years, become an intrinsic part of the city's heritage. The club itself has lost its spirit, as the High Court observed on Tuesday - things have been very dull since the liquor license was cancelled. The government has dealt the institution one more, near-fatal  blow by asking it to surrender its land within the week.

“It's an attempt by the political class to muscle in on the club,” said a source on condition of anonymity. “The BBMP has issued a khatha and a title deed to Bangalore Club. They cannot just take over properties on a whim.” Spurned politicians and their henchmen, who have been denied out of turn memberships are using this as an opportunity to get their own back up. “Anyone can be a member as long as he meets the club rules, but that cannot happen out of turn. Why should it? Being a part of the political class does not mean they are above everybody else. They are the servants of the people but they want to act like masters. This smacks of vendetta,” he said.

“There seems to be a lot of haste in what is being done now,” said another source, closely associated with the club. “I haven't seen something like this happen before. Issues like these need a carefully considered opinion, they cannot happen at the pace at which they are unfolding now.”

A hundred years have passed and the government has always collected its payments. If the rules were being flouted to this extent, why did they keep quiet all this time, asked a prominent artist and veteran Bengalurean. “Bangalore Club is an important institution, so why did the government let things slide? The turn of events is almost funny, really. It feels like a witch-hunt.”

The High Court had hauled the excise department over the coals with regard to the RVB licence issue saying that Bangalore Club can even file a contempt case against the department as more than two weeks have passed since the deadline. “We received the RVB (Retail Vend of Beer) licence for serving draught beer at the club premise on Tuesday night. Now we have to get the supply from the brewery, which will come in a day or two and draught beer will be served at the club,” said Mr Murthy.

The club is still fighting the excise department for the renewal of its CL-4 liquor licence by filing a separate writ petition. “The club is in existence from 1878 and serving liquor at its premises and we are compliant with whatever rules and regulations that existed from time to time from 1878. Now the Excise Department says after the amendment of Excise Act, the department wants the club to be registered under the Societies Act. We are arguing that we are an unregistered association of person (AOP), and this has been recognised by the government of India. We are complying with all the laws and the question is why should we get registered for a CL-4 licence,” asks a club member. 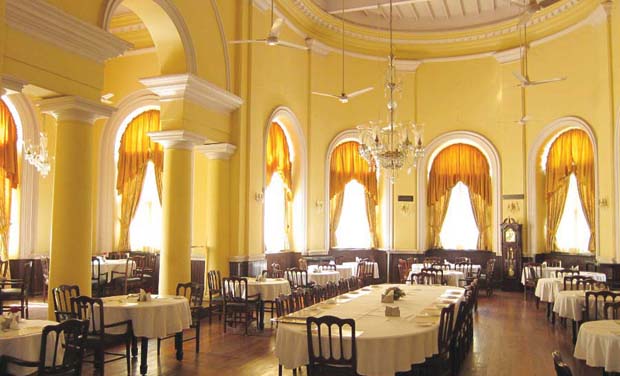 Allegations of a witch hunt against Bangalore Club have made it to the court. Bengaluru is home to a number of pre-independence era clubs, which continue to function in the heart of the city. Questions are being raised about why only Bangalore Club and the BTC are the only ones being targetted.

Bowring Institute
Founded in 1868 by B.L.Rice CIE, Director of Public Instruction, Mysore, the club is located across 7 acres of land on St. Marks Road. It was booked by government agencies for allegedly sub-leasing its premises for commercial purposes.

Century Club
It was founded in 1917 and Sir M. Visvesvaraya was its first president. Located in Cubbon Park, it is a landmark in Bangalore.

Bangalore Turf Club
This club was formally inaugurated on December 1, 1921. It is spread over 85 acres of land on Race Course Road in the heart of the city. There are proposals to shift this club to city outskirts over property disputes. And recently the notices were served by government agencies.

Catholic Club
Located in the heart of Bangalore city, this club is spread over an acre of land. It is flanked by Brigade Road on one side and Museum Road on the other. Having started in 1951 with 75 families, it has now has a strength of 2500 families, who promote social, recreational and sporting activities.

Bangalore Golf Club
This club houses the oldest golf course outside of the British Isles. Established on June 24, 1876, the land, measuring around 60 acres, was previously used by an army regiment as a rifle range & training area.

A confrontation is building up between the Bangalore Club management and Bengaluru district officials over the administration’s move to take over the club’s sprawling  premises measuring 13 acres on Residency Road in the city.

Club office bearers hit out at the order passed by Mr N. Mahesh Babu, Assistant Commissioner (AC), Bengaluru North on July 20 and wondered if the AC even had powers to issue such an order when a writ petition is pending in the court. The club contends that the Bengaluru North AC does not have jurisdiction over the case.

“Earlier a writ petition was filed questioning the jurisdiction of the assistant commissioner to even take up this case and whether he has power under the sections he has quoted, but now since he has passed the orders, we have included the orders in the writ petition challenging whether he has the power to even pass such an order,” said Col K.D. Murthy, Secretary, Bangalore Club to Deccan Chronicle adding, “We have still not received the ‘possession handover’ order from the AC.”

“Mr. Mahesh Babu took up the case on the directions of the House committee constituted by the state Assembly. The House committee has been visiting all premier clubs across the city over a period of time and is arm twisting club managements for various privileges, concessions and benefits. Perhaps they couldn’t get what they wanted from here (Bangalore Club), and that is the reason for all these issues cropping up of late,” said a source in the club management.

The club received a notice from the AC Revenue (North) on June 12 asking it to furnish various records regarding the club and its activities, and the same was furnished to the department by the due date. Consequently, on June 16, a second notice was received from the AC asking the club to furnish the title deeds and records of the land, which was furnished to the revenue department within the stipulated time, said Mr Murthy.

“The documents submitted include notarized copy of the original sale deed of 1873 between one Govindoo Shetty and the Bangalore United Service Club (BUSC). Govindoo Shetty was a private citizen and sold the land to BUSC for Rs 18,000 as private land which was duly registered, reiterating that the land is not military property. Other documents of ownership submitted to the revenue department included encumbrance certificate issued by BBMP from the period 1873 to 2004, Khata certificate issued by BBMP duly notarized, Khata extract issued by BBMP duly notarized, and up-to-date property tax receipts,” said Mr Murthy adding, “Now we do not know what other documents they require to prove ownership.”

“The Clubgate incident involving a senior IPS officer was just a trigger that enabled various people and governmental agencies to join the bandwagon against us for reasons best known to them,” said a club member. “The matter was taken up and heard at the court at 2:30 pm on Wednesday and since we have not received the orders from the AC yet, our counsel was told to first get the orders and include that also in our writ on Thursday which will be heard by the court on Friday,” said the secretary. The response to the notice from the AC will be given through the writ petition in court, Mr Murthy added.

Maha BJP wants all to say hello to vande mataram