Visuals of the Turkish Airlines flight which made an emergency landing at Delhi IGI Airport after a bomb threat. (Photo: ANI Twitter)

New Delhi: A Turkish Airlines flight from Bangkok made an emergency landing in New Delhi after a written bomb threat was found in a toilet on the Airbus A330 passenger jet carrying 134 passengers, the airline and Indian security sources said.

Turkish Airlines was targeted with a series of hoax bomb warnings in April and again over the weekend. This threat was found about three hours into the flight, a spokeswoman for the airline said. 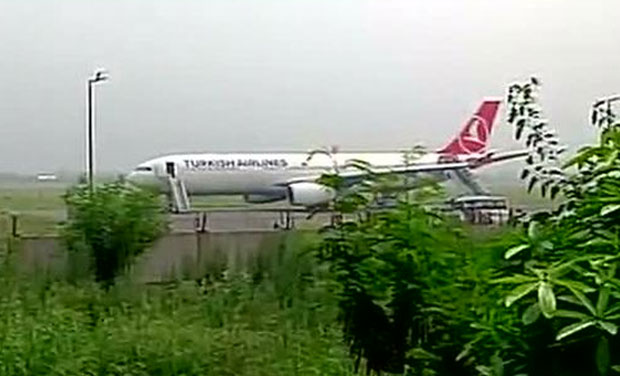 Indian security forces said they were scouring the plane for signs of explosives. The flight will resume its journey to Istanbul if is given the all clear, the airline spokeswoman said.

The airliner was over Nagpur when the pilot sent a message requesting an emergency landing and he was given permission to change course to Delhi, said Rajan Bhagat, spokesman for Delhi police.

The plane was being inspected in an isolated area of the airport, Bhagat said.

Maharashtra government worried about international travelers coming via other states