Lobby at work to oust me: Karnataka Lokayukta

Bengaluru: Despite an FIR being registered against his son, Lokayukta Justice Bhaskar Rao is in no mood to tender his resignation as he still believes that there is a lobby at work that is conspiring to remove him from the post. He has chosen to stay put at least for a week till he makes some documents public, which will talk about favouritism at work in the Lokayukta.

One of the senior advocates, who spoke to both the Lokayukta and Upalokayukta on Wednesday and told the Lokayukta that he should resign or at least go on leave until the investigations are completed, was told by Justice Rao that he will not resign from his post.

“Justice Rao told us that he joined as a public prosecutor in 1977 in Andhra Pradesh and he was promoted as a judge and worked as the chief justice at the Karnataka High Court. He said that he knew the pulse of the people here and knew how to face this problem,” advocate Ramesh Babu, who was part of the senior lawyers’ team that met the Lokayukta, told Deccan Chronicle.

“The Lokayukta alleged that Justice Hegde too favoured a few people during his tenure. He also mentioned the Roost Resort incident in Mysuru where some Karnataka High Court judges were involved. He said if those judges could be promoted to the Supreme Court, why should he resign,” Mr Babu told Deccan Chronicle.

The Lokayukta told the advocates that within in a week, he was going to make some documents public about Justices Subhash Adi and Santosh Hegde and others who were involved in a conspiracy to oust him from the post.

There was high drama on Wednesday at the Lokayukta office, which is embroiled in a controversy over in-house corruption involving Lokayukta Bhaskar Rao’s son Ashwin Rao. Even as the Karnataka High Court issued a stay order on the probe being carried out by Lokayukta Superintendent of Police Sonia Narang, the Lokayukta police registered an FIR against Ashwin Rao. 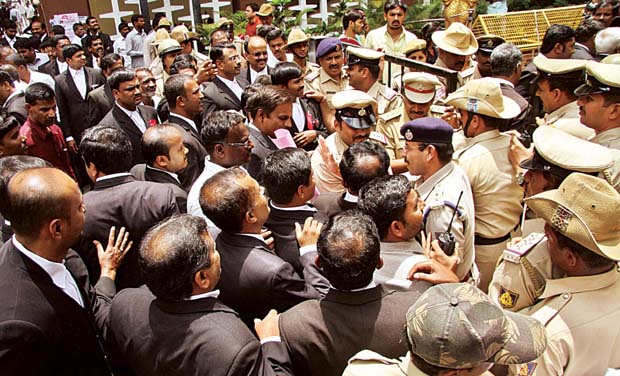 Scores of senior advocates from the Bar Council protested in front of the Lokayukta office, holding placards and shouting slogans demanding the resignation of the Lokayukta.
“Our demands are, Bhaskar Rao should resign, a CBI inquiry should be ordered and the Lokayuta should declare his and his family assets, both in the city and Hyderabad,” Mr K.N. Subba Reddy, former president, The Advocates Association, told Deccan Chronicle. “We will continue our agitation and the protests will spread to all parts of the state till the Lokayukta resigns,” he said.

“Since the Lokayukta’s son has been named accused in the FIR with allegations of extortion, impersonation, criminal conspiracy and several sections under the Prevention of Corruption Act, the Lokayukta, being a head of the anti-corruption watchdog institution himself, should ideally resign from his position, as he is morally bound,” said Mr Reddy.

Meanwhile, sources claimed that Justice Rao will not resign as he is backed by a strong political lobby which brought him to power in the first place.

Governor should intervene, ask Justice Rao to step down: Activists

Governor Vajubhai Vala’s silence on allegations of corruption within the Lokayukta, with the alleged involvement of Lokayukta Bhaskar Rao’s son Ashwin Rao, has angered the activists. 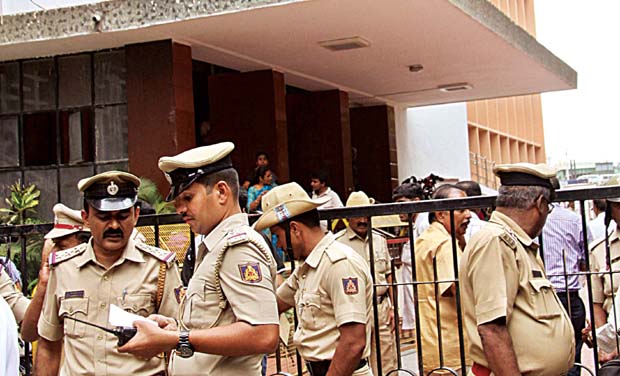 They also asked the governor to prevail upon the government to hand over the probe to the Central Bureau of Investigation, as suggested by former Lokayukta Justice Santosh Hegde, and not to an ad hoc committee. They asked the governor to seek an investigation into allegations of corruption during the tenure of Justice Bhaskar Rao as the Lokayukta. “Mr Vala should ensure that the anti-corruption institution is strengthened.”

Supreme Court advocate K.V. Dhananjaya told Deccan Chronicle that the Lokayukta police are the only competent authority to probe allegations of corruption within the organisation. “I have seen the complaint prepared and filed by Sonia Narang with the Lokayukta authorities. It clearly discloses the commission of offences under the Prevention of Corruption Act, 1988 and the Indian Penal Code, 1860. The Lokayukta police are the only agency in Karnataka authorised to investigate public servants connected to the affairs of the state government when they indulge in corruption. As such, there was no discretion for the Lokayukta police to not file an FIR immediately. The Lokayukta should have commenced an immediate investigation. Fact that they did not makes one wonder about all that has been happening,” he said.

Real estate may not gain from bullish I.T. biz