The approved layout of Yadadri temple

Hyderabad: A few days ago,  the  TS Chief Minister K. Chandrasekhar Rao had launched the works for the Yadadri temple. Mr Rao, along with Governor E.S.L. Narasimhan and Chinna Jeeyar Swami, had performed a special puja and the foundation for the work was laid.

The CM had also approved the master plan designed by art director Anand Sai. “The plan gives the temple complex a new look. One can see the main temple’s gopuram from anywhere in the temple complex,” said Mr Sai. He added that the design was made in tune with the agamana sastra.

“Devotees will have a view of a big Lakshminarasimha Swami idol at the entrance. Even after the new construction, it will appear as if the temple is 200 years old. Every wall and pillar will have Lakshminarasimha swaroopas,” he added. 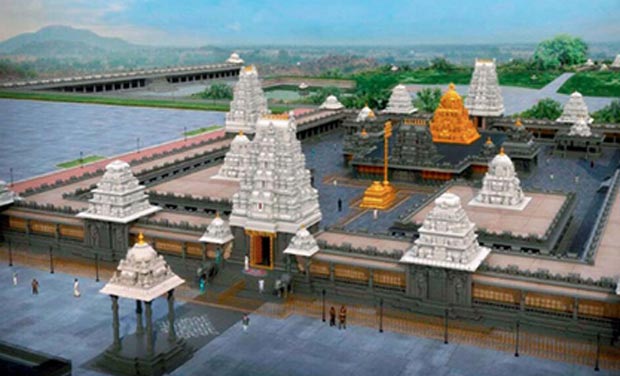 Art director Anand Sai who drew up the plan says the gopuram will be visible from anywhere in the complex. (Photo: DC)