Karnataka lottery scam: Rajan a mere mule in the scam?

Bengaluru: Is Paari alias Laddu Rajan the real lottery kingpin or is he just a mule in the larger and sinister multi-crore scam, which has rocked the state government with some senior IPS officers being nailed for being part of the inter state mafia? According to sources Rajan is a conduit between the real kingpin and the officers, who are in the dock.

“He is part of the network, but he is certainly not the kingpin. There is someone bigger and more dangerous behind him. CID was trying to find the face behind the scam, but now the CBI will have to dig the muck and bring out the truth. The CID was examining his assets and bank accounts and investigating the money trail of Rajan and the police officers he was reportedly in touch with. The investigation is tedious because most of the financial transactions are in cash and indirect. They have not as yet arrived at the notional value of the scam,” added an officer on condition of anonymity. 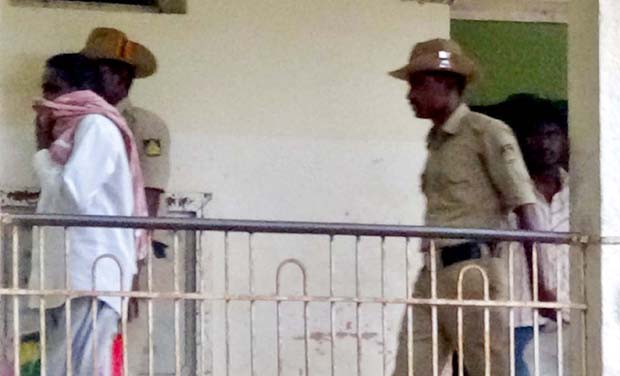 The police taking away Paari Rajan after his arrest

How he got Paari in his name

Before 2007, when the lottery was still legal in the state, Rajan travelled from Bangarpet to Bengaluru and his hub was next to a hotel close to the Upparpet police station. The place where he operated from was called “Parrys Corner” and that is how he got the name Paari Rajan.

The lottery scam is the fourth case that has been handed over to the CBI by the state government in the last two years. The other cases include the unnatural death case of former IAS officer D.K. Ravi in March this year, the scam in the distribution of 107 sites by the Mandya Urban Development Authority and the Soujanya rape and murder case in Ujire.

It is not clear why Paari Rajan remained aloof of his family members. Rajan has two brothers, Manju and Babu. Sources said that Babu’s Maruti 800 broke down six months ago and is still lying at a garage as he does not have money to repair it. He works as a car mechanic at a garage in KGF for a meagre salary.

While his family members lived in penury, Rajan made big donations to temples and for functions like Ganesha festival. “If somebody approached him with health problems or seeking financial help, he would not send them back empty-handed,” a source said.

The Excise and Lottery Enforcement officials, who raided Rajan’s house on May 4, seized lottery tickets, result sheets, two bonds worth Rs 1 lakh each, a computer CPU, passbooks, cheque books and Rs 38,000 cash. The material evidence is presently under the custody of the CID.

At Bharat Nagar, Bangarpet and KGF, rumours are doing the rounds that Rajan had bought a property worth Rs 1.5 crore on Kempapura Road recently.