Nubia likely to launch bezel-less handset in India this week

Chinese smartphone manufacturers such as Nubia and Meizu may enter the Indian market with bezel-less handsets this year.

Nubia has teased out an image of its soon-to-be launched handset on Amazon. Additionally, the company also released a promotional video hinting at a high-end smartphone, which will offer a good user interface, processor and possibly better gaming experience. 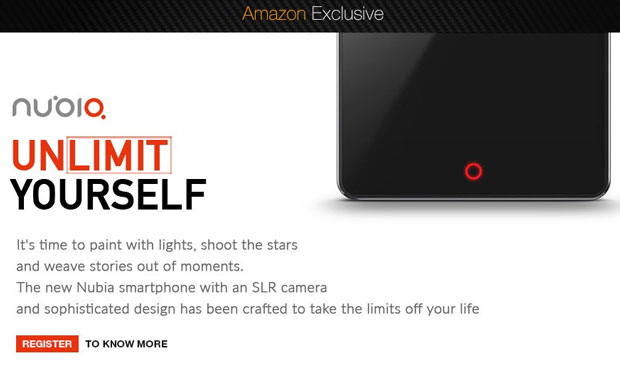 The handset teased on the Amazon website, looks similar to the Nubia Z9 edge-to-edge smartphone. Reports state that Nubia will probably launch two handsets - Nubia Z9 and Nubia Z9 mini on May 19, 2015.

Nubia Z9 will basically feature a 5.2-inch full HD borderless screen, offer 32GB of onboard storage and will be powered by a Snapdragon 810 chipset. On the camera front, the Nubia Z9 sports a 16MP rear shooter and 8MP front-facing camera . The handset is fuelled with a 2900mAh battery and is expected to deliver a better battery life.