Micromax Yuphoria finally launches in India; flash sale on May 28

The Yuphoria is a 'Made In India' smartphone, and inspired by Saturn's rings for the camera. Yuphoria is said to be built with an all-metal frame with the laser etching and sandblasting technology. The company also claimed that automobile engineers hired for stamping process for metal frame.

Yuphoria, is a joint effort of YU and the large community of developers and consumers, who came together and contributed right from naming the device to lending life to the OS with themes, ringtones, wallpapers and boot animation. 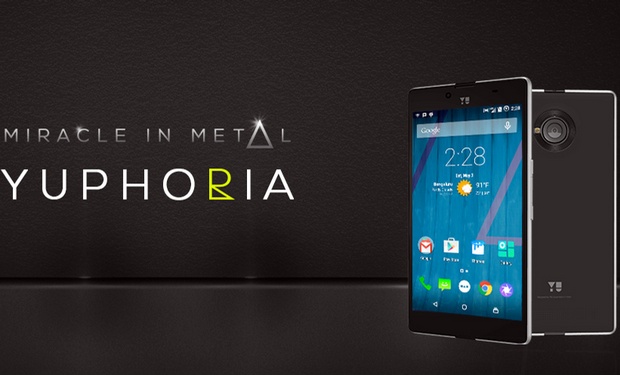 Under the hood, the Yu Yuphoria handset is powered by the 64-bit Qualcomm Snapdragon 410 chipset, 1.2GHz quad-core processor, offers 2GB of RAM and an Adreno 306 GPU. Yuphoria runs on Android Cyanogen OS, based on Android Lollipop OS and offers 16GB of internal storage. Truecaller has also been integrated with Cyanogen dialer. The App Themer allows its users to customise your own themes and skins for each app.

The dual-SIM Micromax Yu Yuphoria smartphone sports an 8MP primary camera with f/2.2 and full HD 1080P recording. It also features a 5MP front camera, with 86-degree wide angle lens.This handset is fuelled with a 2230mAh battery with quick charge technology, which is said to charge from 0% to 65% within 45 minutes.

Priced at Rs 6,999, the Yu Yuphoria will go on sale on May 28, 2015. It will be available in two variants - Champaign Gold in White and Buffed Steel in Black.