New Delhi: The multi-billion deal for 36 Rafale fighter jets could see French defence major Dassault Aviation entering into a joint venture with state-run HAL or any private player to set up a base here for augmenting its existing production line. Defence sources said, such a step, if taken will not only allow the French firm to ramp up its production rate, but will help it to meet offset obligations in India, likely to be 30-50 per cent of the sales value.

Considered as the first major push under ‘Make in India’ category in defence sector, the approach will also mean that the French company would stand a better chance in case the Indian government decides to go for more Medium Multi-Role Combat Aircraft later than the initial 36 agreed. 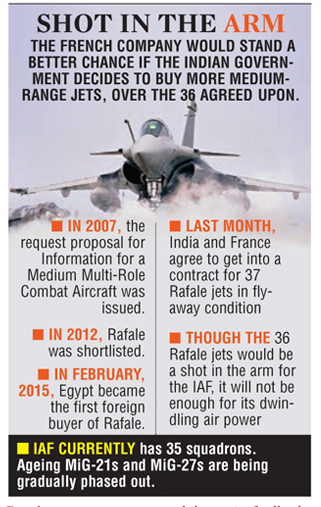 It will allow Dassault Aviation to set up manufacturing facilities in India to augment its existing production line in Merignac in France under a joint venture with HAL or a private player of its choice. From the operation and sustainment perspective also, creating of these facilities will help the IAF, the sources said. These issues among others would be discussed during the forthcoming visit of French defence minister Jean-Yves Le Drian on May 6 with his Indian counterpart Manohar Parrikar and National Security Advisor Ajit Doval.

The minister is flying down on May 5 from Qatar to firm up the modalities as India wants the fighter aircraft as soon as possible. “This visit will focus on firming up the broad parameters for the deal under which the contract would eventually be inked,” the sources said. French sources said they “are open to any idea”, but insisted that nothing has been fixed as yet. “We will have to see how the meeting will go and then get a feedback to actually decide what can be done. We are open to all ideas,” they said when asked about the plans for a joint venture.

The production rate of Dassault Aviation for Rafale stands at about 1 aircraft per month. However, the company has bagged three major contracts this year totalling to 84 aircraft, all of which have to be delivered fast. The latest contract to be won by Dassault was from Qatar for 24 Rafale fighter jets and MBDA missiles.

Municipal polls unlikely to be postponed in Telangana despite Covid worries

One Covid death nearly every hour in Telangana