A startup firm in Silicon Valley, named as Light, is working hard to revolutionize the photography industry related to smartphone cameras. The project is in progress and will see light of day as early as next year.

MIT Technology Review got an insider about the company and the technology they are working on. The technology of producing higher megapixels is interesting and they way they are planning to achieve is mind blowing.

Light is using a technique, which involves using a cluster of small camera modules together to create high-resolution photographs. They have decided to use the technology on the most used personal gadget that everyone caries around everyday—the smartphone.

Most digital cameras feature a sensor and a lens. When light hits the sensor, an electric current is flown through the sensor to produce a digital photograph. When using multiple cameras, each sensor paired with its own lens, and fired at the same time, they can take a higher resolution photograph. But it is not as easy as you think. The photographs from each camera sensor have to go through intelligent software, which combines the multiple images into one, single high-resolution photograph. Using this technique, Light believes that they can now embed the equivalent quality and zoom of bulky, expensive DLSR cameras into smaller and cheaper packages, such as smartphones and compact cameras.

Presently, the company is still developing the technology and does not have a fully working prototype as yet. But Light is confident that they will have a breakthrough soon and expect it to be a reality on smartphones by early 2016.

Light is planning on a deal with Foxconn, the world’s largest electronics manufacturer. Foxconn will license the technology from Light for its future smartphones. Last year, Light had raised around $9.7 million from various investors.

According to MIT, Light is taking advantage of the decreasing costs of the optics and also the declining weight and size. 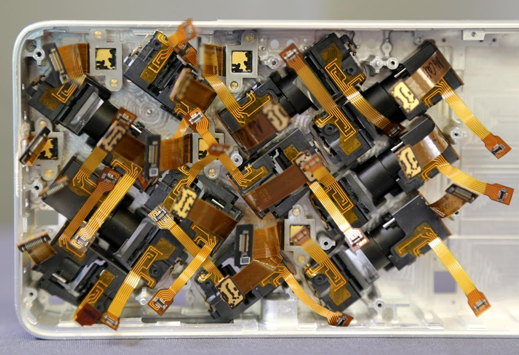 MIT got a preview of the present prototype at their California office. (Photo credit: MIT). The device, as big as a car’s rearview mirror, was cramped with 16 camera modules, ranging in focal lengths, such as 34, 70 and 150mm. The idea to incorporate several cameras with different focal lengths is so that you can capture the same image from multiple angles and perspectives. This in a way also replicates how the zoom works on a DSLR camera. The combined images result in a photograph that emulates a bigger camera lens. Light did not give a working demo of the camera as yet, but they did show an image captured by four 8MP cameras and combined with the software.

The new technology will be a boon to shutterbugs that are looking for lighter equipment when travelling. When implemented in smartphones, it can convert the smartphone into a next-gen AIO gadget on the go. Light is definitely on the road to building the future of cameras.