RCB started slowly and cautiously, lost three wickets too within the first eight overs but when that man Chris Gayle was there till the end, and if you drop him twice, you will lose more often than not. (Photo: BCCI)

Kolkata: What a topsy-turvy match it was at the Eden Gardens in Kolkata on Saturday when Chris Gayle's blistering 96 off 56 balls powered the Virat Kohli-led Royal Challengers Bangalore to their first win against Gautam Gambhir-led Kolkata Knight Riders in the Indian Premier League 8. RCB defeated Kolkata by 3 wickets and that too, with 6 balls remaining. Without any doubt, Gayle was adjudged the Man of the Match.

RCB started slowly and cautiously, lost three wickets too within the first eight overs but when that man Chris Gayle was there till the end, and if you drop him twice, you will lose more often than not. His seven fours and seven sixes became a regular affair towards the end even though he was running out of partners. KKR got him in the end, but it was too late by then.

55 runs came from the last five overs and a cameo of 41 from Russell has given Kolkata Knight Riders a challenging 177 against Royal Challengers Bangalore in match 5 of the Indian Premier League 8 at the Eden Gardens in Kolkata on Saturday. Robin Uthappa says he's "pretty happy" with the total.

RCB now at 66/3 after 9 overs as the game goes for a strategic timeout! #KKR #Go4More

Here's how the action unfolded

Chris Gayle was in top form as he blasted his way to a powerful 96 that was instrumental in taking RCB to their first win and the fans enjoyed it the most. Although wickets were tumbling at the other end, it was the Gayle storm all the way.

Sean Abbott is run out as Gayle tries to steal a single off Shakib! #RCB 133/6 #PlayBold #KKRvRCB #PepsiIPL

In the end after the departure of Gayle, where the damage was already done and it was a scenario of too little too late.

Superb fielding from Pandey, Gayle is run out trying to get back on strike! #RCB 171/7 #PlayBold #KKRvRCB #PepsiIPL

Ahmed hit the winning runs and sealed the match for the Men in Red.

Royal Challengers Bangalore will have to rely now on dashing West Indies player Chris Gayle after his country's teammate Darrey Sammy was deceived by a well disguised Shakib Al Hassan delivery. Sammy came out of his crease and tried to whip the ball across but failed. A disappointed Sammy just scored 7 runs.

Shakib Al Hasan to Sammy, OUT, another stumping chance, this one goes to the third umpire no idea why! Sammy came well out of his crease, got beaten in the air and Robbie whipped the bails off in no time to stump him

Both West Indies players Chris Gayle and Darren Sammy will have do take responsiblity now if they have to see their side home.

But de Villiers' stay in the middle was short-lived after mystery spinner KC Cariappa's delivery beat de Villiers and Robin Uthappa did an easy job behind the stumps. AB was beaten by the change in pace and was stumped fast by Robbie before AB could look back.

Yusuf Pathan didn't do damage with the bat but he's certainly made up with the ball after one half of the Pathan brothers sent both Dinesh Karthik and Mandeep Singh in the same over. Karthik was the first to go after being clean bowled by Pathan. The ball pitched well outside off and DK went back in the crease to cut it late but he got too far away from it scoring just 6 runs.

Mandeep Singh, who hit a six off Pathan's delivery tried to reverse sweep but this time the ball hit the middle stump and Mandeep had to make the slow walk back to the pavillion facing a jubilant Pathan. The RCB batsman scored just 6 runs.

After getting spanked for six, Yusuf strikes again! Cleans Mandeep up! #Go4More #KKR

Openers for the Royal Challengers Bangalore skipper Virat Kohli and Chris Gayle started off the innings on a cautious note but then Kohli and Gayle went on a rampage before speedster Morne Morkel struck for KKR and the danger man Kohli had to depart.

Morkel made a loud appeal for a catch down leg and the umpire raised the finger. Good pace and bounce for the short ball as it was going down leg, Kohli pulled, got some glove before Uthappa took a good catch. Kohli scored just 13 runs.

A great innings by GG & a cameo by @Russell12A gets us to 177. Now it's up to our bowlers to restrict RCB! #Go4More pic.twitter.com/IpMeFepaWZ

Russell smashed 41 off 17 balls with six boundaries and two sixes after skipper Gautam Gambhir created a platform with his second successive half-century in as many matches. Courtesy Gambhir's 58 off 46 balls (7x4, 1x6) and Robin Uthappa (35 from 28 balls; 4x4), KKR got a flying start with an 81-run opening partnership. 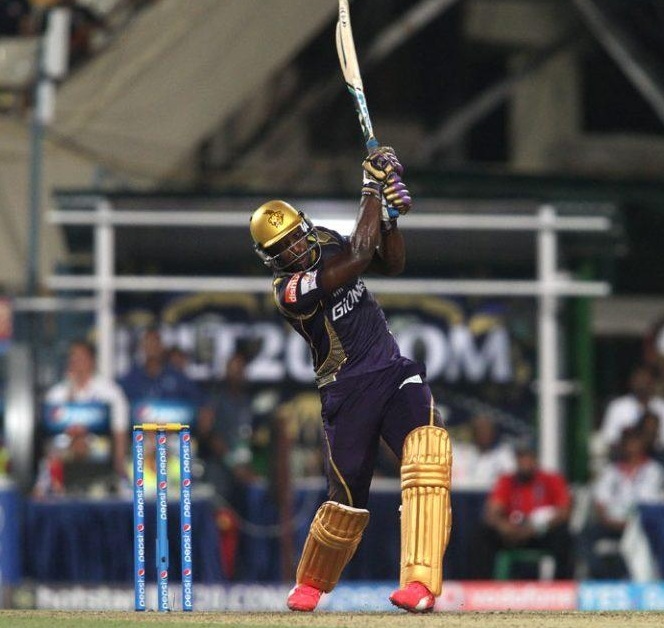 The KKR opening duo faced 64 balls for their 81 runs with skipper being lucky when AB de Villiers dropped a sitter when he was on 31 with the unlucky bowler being Abu Nechim Ahmed.

KKR were in a spot at 131 for four when they lost Manish Pandey (23) and Suryakumar Yadav (11) quickly but Russell took charge to take the team to safety.

Before RCB could make any further inroad Russell entertained the packed Eden crowd towards the death with his 17-ball 41 studded with six fours and two fours to give KKR score some filip.

Put in, KKR could not have asked for a better start, with two boundaries that went past their fielders and another run from an desperate overthrow for 13 runs from the first over bowled by Sean Abbott.

More than the runs that Abott leaked in the first over, it was RCB's frantic approach that it seemed derailed them as they looked mentally exhausted. Considered one of the safest fielders in the modern day cricket, de Villiers fluffed a catch and looked edgy in fielding among all of them.

KKR raced to 40 from four overs and the duo notched their 50-run partnership in 32 balls.

Gambhir going all guns blazing with 31 from 27 balls pulled a short ball of Abu Nechim Ahmed as it went straight to the ever reliable de Villiers but the ball was seen popped out of the South African's hands in one unbelievable moment.

RCB finally managed to get the breakthrough after 10 overs with Abu Nechim breaking the opening partnership for 81 when Uthappa (35) holed out to Darren Sammy at long on.

Kohli's men made a comeback by getting a second breakthrough when leg-spinner Yuzvendra Chahal dismissed Gambhir with a wrong one. KKR earlier brought in uncapped rookie spinner KC Cariappa in place of Umesh Yadav in a bold move against a team that boasted the most explosive batting line-up in Kohli, Gayle and de Villiers.

Here are the playing XI