In MI, KKR will have an opposition who have tasted their maiden IPL win in this very surface in 2013 when the Rohit Sharma-led side beat Chennai Super Kings. (Photo: BCCI)

Kolkata: The champions have begun their season with a dominant performance with a convincing seven-wicket win against Rohit Sharma-led Mumbai Indians in the Indian Premier League Season 8 opener at the Eden Gardens in Kolkata on Wednesday.

Apart from the second half of the partnership between Rohit Sharma and Corey Anderson, the Kolkata Knight Riders dictated terms all the way through. Suryakumar Yadav (46 off 20) played a blinder to finish the game, after Gautam Gambhir (57 off 43) and Manish Pandey (40 off 24) set it up with an 85-run second-wicket partnership.

Morne Morkel was adjudged the Man of the Match for his brilliant spell of four over that went for 18 runs and the two wickets.

Congrats @mornemorkel65! You were on the top of your game and got a well deserved Man of the Match award! #KKR #Go4More

On another note, that makes 10 IPL victories in a row. And we are hungry to #Go4More! #KKR

Rohit Sharma and Corey Anderson's 131-run partnership in just 88 balls steered the Mumbai Indians to a strong target of 169. The total was definitely a testing one for Knight Riders' batting line-up.

Here's how the action unfolded

Gautam Gambhir won the toss and elected to bowl first. Keen to carry on their winning streak from the last season, a rejuvenated Gambhir-led Kolkata Knight Riders will look to emerge triumphant as they face Rohit Sharma and the Mumbai Indians.

#KKR wins the toss and elects to field! Come on #Knights, let's win this for Kolkataaaaa!

KKR has gone on to win two titles (2012 and 2014) since the acquisition of the Trinidad off-spinner Sunil Narine in 2011 and faces the biggest challenge this year as Narine's effectiveness with a re-modelled action is yet to be seen. 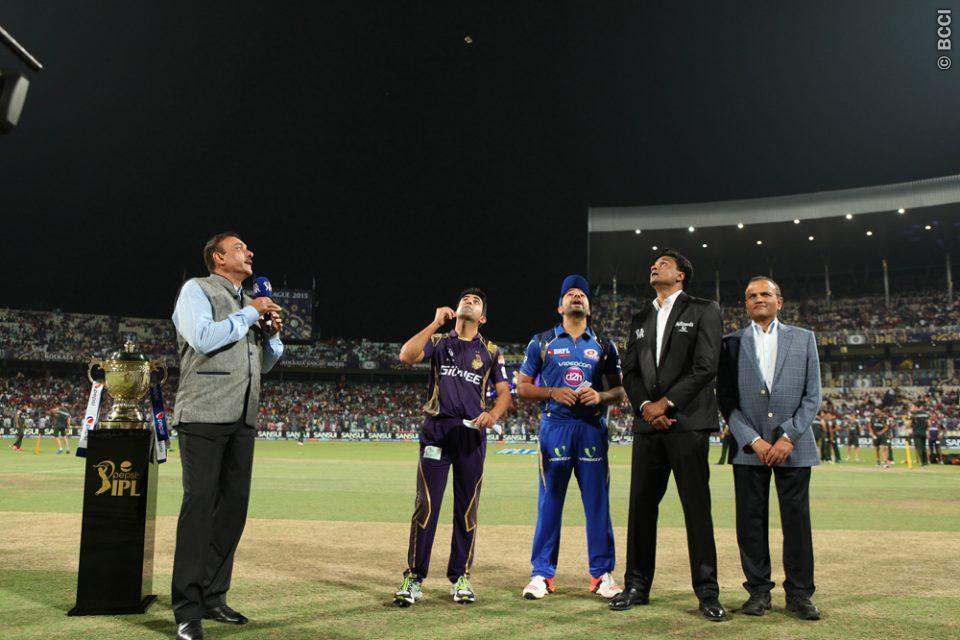 (Photo: BCCI)
On the field, both the sides match equally on paper but with little baggage of the past and some hard-hitting players in Corey Anderson, Kieron Pollard and new signing Aaron Finch will give an edge to Mumbai Indians. In MI, KKR will have an opposition who have tasted their maiden IPL win in this very surface in 2013 when the Rohit Sharma-led side beat Chennai Super Kings.
Manish Pandey and Gautam Gambhir put up a good partnership and were creating some real problems for Mumbai Indians. Manish Pandey looked to be in great touch striking the white ball from the sweet spot.

(Photo: BCCI)
Pandey, who was bullying the KKR bowlers eventually fell prey to off-spinner Harbhajan Singh. Bhaji did go for a lot of runs earlier, this time tossed it up outside off. Pandey went for the slog-sweep and ended up hitting it much straighter than he intended, straight down the throat of Pollard at long-on.

Gautam Gambhir faced a similar situation Mahela Jayawardene faced during the ICC Cricket World Cup 2015 when Sri Lanka faced Afghanistan. While facing a Vinay Kumar delivery, Gambhir found his bat in two halves much to the amusement of fans at Eden Gardens.

(Photo: BCCI)
Gautam Gambhir's brilliant innings came to an end after Bumrah banged one short. The left-handed batsman looked to pull it only to find himself caught by Ambati Rayudu at deep sqaure leg. Gambhir departed for a well-played 57.

After the skipper's departure, it was Suryakumar Yadav all the way. The young batsman's blitzkerg speed took Mumbai by surprise and even a stunned Rohit Sharma remained clueless. The Mumbai Indians skipper tried everything even using the experienced Malinga but all the veteran Sri Lankan's efforts went in vain after Yadav proved to just too good on the day.
Suryakumar Yadav eventually sealed the match for Kolkata with nine balls to spare.

The Champions carry on with their winning ways! Make a feast of a fairly good total! There's one victory. Now for the next! ;) #KKR #Go4More

The whole of Kolkata erupted including Shah Rukh Khan and his children. The win sent out a huge sign to all the other teams in the IPL. KKR means business and the title holders are here to stay.

As far as the Mumbai Indians bowlers were concerned, none of them were spot on and Ricky Ponting needs to work on his spin department a lot. Harbhajan Singh took a wicket but was expensive.

King Khan with his son Abram at #PepsiIPL #KKR pic.twitter.com/NAIvGj54pM

(Photo: BCCI)
After a clinical batting display from the Mumbai Indians, loosing only three wickets, Gautam Gambhir and Robin Uthappa entered the crease positive, confident and a great backing from the home crowd.

(Photo: BCCI)
Robin Uthappa, who struck a beautiful six into the stands with just a flick off the wrist was walking back to the pavillion. Corey Anderson worked his magic with the ball.

Corey into the attack and he starts with a gift down the leg-side! SIX for Robin. #ApunKaSuperstar #MI

Uthappa's stint at the crease was short-lived after Anderson bowled a full, slanted across a bit wider. Uthappa went for the drive and was playing away from the body, with an angled bat, and the edge carried through to Harbhajan Singh at slip.

(Photo: BCCI)
Corey Anderson and Rohit Sharma ran riot as they smashed the Kolkata Knight Riders' bowlers all across the park. Rohit fell two runs short off his century while Anderson registered his first IPL 8 half-century.

Meanwhile, KKR owner Shah Rukh Khan was spotted in the stands cheering along with the rest of Kolkata. 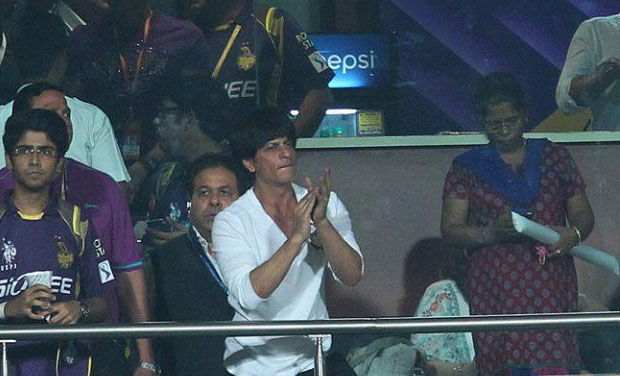 (Photo: BCCI)
Ambati Rayudu was the new man at the crease and Morne Morkel continued to create havoc for the Mumbai Indians sending Rayudu back for a pure duck. Rayudu has steered this one straight into first slip's hand and Yusuf Pathan made the catch too easy.

The fans at the Eden Gardens however, are enjoying the action. 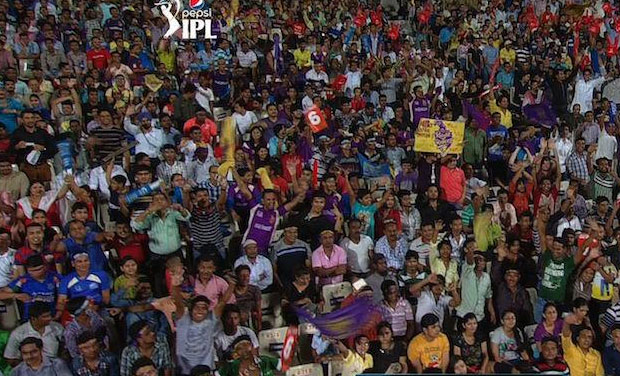 (Photo: BCCI)
Soon to follow Finch was Aditya Tare and this time it was Shakib Al Hassan to take the wicket. Tare went down the track and he didn't reach the pitch leaving Umesh Yadav to pick his second catch of the match. Shakib tossed it up slower and wider, and Tare had to reach out in front of his body to hit that, ended up hitting it straight down long-off's throat. Tare made his slow walk back after scoring 7 runs.

Aaron Finch and skipper Rohit Sharma opened the innings for the Mumbai Indians. Umesh Yadav, who was the pick of the Indian bowlers in the recently concluded ICC Cricket World Cup in Australia, started off proceedings for the Knight Riders.
On the other end firing was Morne Morkel, who struck first blood in the third delivery sending Finch back to the pavillion. Finch marked the the first wicket of IPL 2015. A quicker one than he expected, Finch was in an uncomfortable half-forward position and in no position to pull - it wasn't short enough for that either - and he top-edged it high in the air and a simple catch to Umesh Yadav at deep square leg. Finch departed for a mere 5 runs.

Finch departs. Yadav takes a high catch and MI is 1 down for 8. #ApunKaSuperstar #MI

Here are the team line-ups
Aaron Finch, Corey Anderson, Lasith Malinga and Kieron Pollard will be the foreign players that will star for Mumbai Indians while for the Knight Riders, it will be Shakib Al Hassan, Andre Russell, Sunil Narine and Morne Morkel.