Hyderabad: In tune with its line of argument, the AP government has shown that the power it can generate and supply to Telangana is 50.5% and not 54.89% which was decided by a GO (MS 20) last year.

“We have successfully argued before the Central Electricity Authority (CEA) that the power ratio between the two states of 53.89%: 46.11% is factually incorrect. The power can be shared only on a 50-50 basis and not the ratio mentioned in the GO. A committee of the authority heard arguments of both the states and will give its verdict on April 30,” said Ajay Jain, Principal Secretary of Energy, AP. 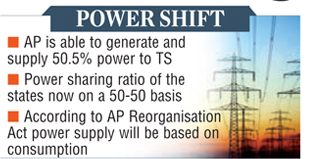 The Centre has formed a committee headed by Neeraja Mathur after AP’s controversial decision to scrap PPAs which was contended by the Telangana government. After Neeraja Mathur demitted office in January this year, the progress on the resolution of disputes has slowed down.

According to the AP Reorganisation Act, 2014 (12th Schedule- Section 92), the power of the central generating stations will be allotted in such a ratio to TS and AP based on the actual energy consumption of the last five years.

AP has been contending that the GO 20, which was issued during the Governor’s rule will have no locus standi. “The sharing shall be done by the Centre and not through a GO released during the time of an adhoc  arr-angement. The ratio was arrived at after taking the figures of 2006-07 and not consumption figures of last five years,” it argued.

Power rows between AP and Telangana reached a breaking point with AP’s decisions to scrap PPAs and rejecting TS’s demand for a share in Krishnapatnam, Hinduja and Siler projects.

The government of AP has chalked out plans to provide an additional 4,000 MW of power this year to meet the growing industrial needs of the state.
According to Ajay Jain, principal secretary of energy, the plan has been in the pipeline for a while. The additional power will be from Krishnap-atnam (1,600 MW) and Hinduja (1,040 MW) which will be operational this year. Under renewable sector, wind power projects  (1,000 MW) and solar power projects (300 MW) will come up by 2016.

US meddles as India, China build their Asian bond

TRS failed to give 2BHKs: A Revanth Reddy

US meddles as India, China build their Asian bond